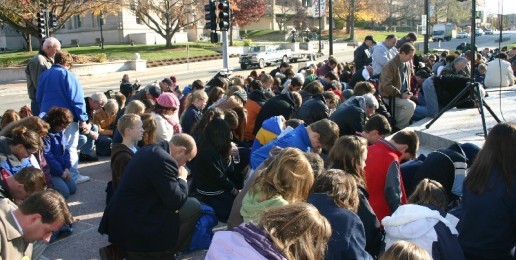 Join IFI and Illinois families from around the state to take a stand for protecting marriage, religious freedom, parental rights and the innocence of our children! Plan to bring your family, friends AND organize your church to support this rally and lobbying day. It is critically important that we have a strong showing because liberal activists continue to press for counterfiet “marriage” (SB 1716), which will affect our children and our religious freedom.

Thursday, October 29th
at the Lincoln Stature on 2nd Street and Capitol Drive at Noon.

Background
In May, the homosexual lobby, Equality Illinois, and its allies had fourteen lobbyists working overtime in an attempt to secure support of 60 state representatives for their “civil unions” bill. Other groups assisting in passing the measure include the American Civil Liberties Union (ACLU), the AIDS Foundation of Chicago, the Service Employees International Union (SEIU), Stonewall Democrats, and Illinois Log Cabin Republicans. They may again attempt a vote during the fall veto session (October 14-16 and 28-30).

Moreover, for the past three General Assembly sessions (6 years), a constitutional amendment to define marriage as one man and one woman has been introduced. And each year, Speaker Michael Madigan (D-Chicago) has refused to move it to a committee to be debated and voted on. If this amendment were to come before the entire General Assembly, we are confident that it would receive the two-thirds vote needed to pass. And once passed by the General Assembly, it would be placed on a ballot referendum in the next state wide election for Illinois voters to decide.

We cannot afford to ignore this situation! Illinois citizens can send a strong message by joining us at the Capitol on October 29th to lobby and rally to protect God-ordained marriage in Illinois.

ACTION: If you are not able to join us for the marriage rally and lobby day you can still ask your State Representative to vote ‘NO’ to SB 1716 by sending him/her an email or fax.  You can also call the Springfield switchboard at (217) 782-2000.