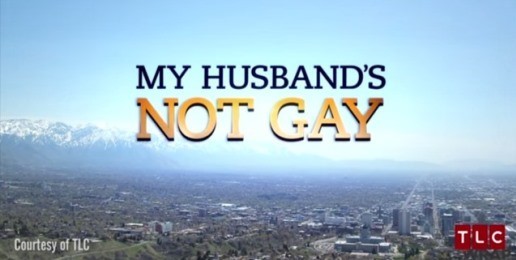 The political Left, usually fanatical defenders of tolerance, diversity, freedom of expression, and choice in all things sexual, is in high dudgeon about a one-hour TLC television special titled My Husband’s Not Gay scheduled to air Sunday night (1/11/2015).

The show profiles four Mormon men who admit they are attracted to men but have chosen to pursue relationships with women. Three of the men are married, at least one of whom is raising children in a normal family structure. There is no reason to doubt these men’s claims that they love their wives, because even men who feel erotically attracted to men are capable of loving women.

In an almost comical display of irony, homosexual activists—those fanatical of tolerance, diversity, choice, anti-censorship, and “narrative” variety—are calling for the cancellation of the program before it even airs.

The Gay & Lesbian Alliance Against Defamation (GLAAD) claims the show “sends the wrong message.” Near as I can tell, the men in this series are saying that they choose not to place their same-sex attraction at the center of their identity. They’re saying that there are other values and beliefs that shape how they construct identity and determine their actions. They’re saying that they personally believe that homoerotic activity is wrong and that they seek to affirm only those feelings that are consonant with their religious beliefs. Are representatives from GLAAD claiming that such beliefs are objectively wrong?

According to the Associated Press, GLAAD views the show as “a sad reminder of so-called gay conversion therapy.”

How do the claims of men who admit to being sexually attracted to men remind GLAAD of “conversion therapy”?  I guess both “conversion therapy” and the decisions of these men reflect a rejection of the Left’s assumptions about the moral status of homoerotic activity, but that’s about it. Perhaps these men’s decisions are sad reminders to GLAAD that not everyone has acquiesced to the imperious ideological commands of GLAAD, the Human Rights Campaign, and the Gay, Lesbian and Straight Education Network.

Like GLAAD, “bi-sexual” Eliel Cruz writing for Rolling Stone magazine is consumed by a fear that impels them toward oppression and suppression. They fear that if Americans hear the stories of men who freely choose not to affirm as good their unchosen, unwanted same-sex attraction, Americans may reject the Left’s perverse mischaracterization of all counseling efforts that may help men and women reconcile their faith and sexual predilections in ways that the Left doesn’t like.

Here’s what Cruz offers as evidence that this one-hour special is “dangerous”:

These men use the same verbiage and framework that’s been taught by decades by those in the so-called “ex-gay” movement. Using words like “same-sex attracted” in lieu of saying one is gay is ex-gay training 101. The show will most likely avoid using the term “reparative therapy” as it’s become known for being deeply harmful. But whether it’s explicitly said or not, that’s what this show is about.

The purpose of Newspeak was not only to provide a medium of expression for the world-view and mental habits proper to the devotees of IngSoc, but to make all other modes of thought impossible. It was intended that when Newspeak had been adopted once and for all…a heretical thought…should be literally unthinkable, at least so far as thought is dependent on words. Its vocabulary was so constructed as to give exact and often very subtle expression to every meaning that a Party member could properly wish to express, while excluding all other meaning and also the possibility of arriving at them by indirect methods. This was done partly by the invention of new words, but chiefly by eliminating undesirable words and stripping such words as remained of unorthodox meanings, and so far as possible of all secondary meaning whatever….

Leftists hate the term “same-sex attracted” because it focuses (rightly) on feelings and does not carry the extra, Newspeakian connotations of “gay.” “Gay” is a rhetorical invention of the Left created to communicate that same-sex attraction is inherently good, that it’s absolutely immutable in all cases, and that fulfillment can come only if such attraction is affirmed. In other words, “gay” embodies a Leftist view of “identity.”

Here is risible reason #2 that Cruz offers as evidence that TLC’s one-hour special is dangerous: “TLC is giving a fringe narrative a platform.” Since when do sexual subversives object to fringe narratives? Haven’t Leftists extolled all things fringy for decades? Let’s not forget that until very recently homoeroticism, same-sex faux-“marriage,” and “transgenderism” were uber-fringy phenomena.

Cruz also objects to “Perpetuating the idea that changing one’s sexuality is possible through prayer.” First, Christians certainly believe that an omnipotent God is fully capable of changing sexual feelings and that prayer is powerful. This is not to say, however, that all people who experience same-sex attraction will see their feelings eradicated. Most Christians will experience sinful inclinations until the next life.

But, more directly relevant to the show, there’s no evidence from the trailer that the four men profiled in the TLC program are suggesting that their same-sex attraction has changed or will change. They simply don’t want to act upon it or affirm it as central to their identity.

GLAAD president and CEO, Kate Ellis, stated that “No one can change who [sic] they love, and more importantly, no one should have to.” Ellis seems to be making the breathtakingly presumptuous claim that the men in the TLC show do not love their wives and more broadly that those who experience same-sex attraction are incapable of loving people of the opposite sex.

For many people, however, “identity” consists in, among other things, only those feelings they affirm as good and properly ordered.  Identity for them is not merely the aggregate of feelings they experience. Therefore, those people will reject as central to their identity feelings that they believe are disordered and which if acted upon will result in illicit conduct. While the Left believes that unchosen homoerotic attraction is good, properly ordered, and must be affirmed as central to identity in order to live a happy fulfilled life, their beliefs are not objective facts, and no one has an obligation to accept them as true.

While the Left claims to value tolerance, they are intolerant of any and all public expressions of views regarding volitional homoerotic activity or relationships with which they disagree.

While claiming to value diversity, they want to censor the kinds of stories the public hears.

While claiming to value choice, they loathe and condemn the choices the men on this TLC show make.

In increasingly Orwellian efforts to purge the cultural landscape of the expression of ideas that undermine their dogma, censorious homosexual activists violate the very ideas they exploit: choice, diversity, tolerance, and freedom of expression. TLC should not cancel My Husband’s Not Gay in response to the demands of censors and ideologues. These stories offer rarely seen glimpses into the lives of people who construe homoerotic attraction, marriage, family, identity, and fulfillment differently than do homosexual activists. Their lives are part of the variegations in this diverse American life. And there may be someone out there who sees in these lives hope for a future different from the bleakly deterministic picture offered by the likes of GLAAD and Rolling Stone.