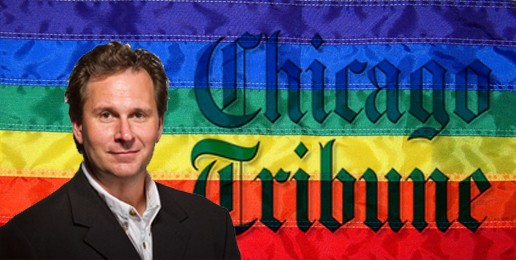 If Chicago Tribune columnist and arch-defender of all things sexually deviant, Rex Huppke, had the humility to know that he doesn’t understand the Bible, he might refrain from using it foolishly to mock Christians.

In a column last week, he took a verse from Exodus out of a biblical context which he clearly doesn’t understand in order to ridicule Kentucky County Clerk Kim Davis. In this column, he used Exodus 16:12 as the basis for an analogy intended to indict Kim Davis for her act of civil disobedience in refusing to issue marriage licenses with her name on them to those whose unions are inherently non-marital.

There are two important reasons for responding to Huppke’s “argument”: First, he has a large audience and, therefore, the potential to influence people. Second, his feckless ideas are, unfortunately, not unique to him.

Exodus 16:12 says, “’I have heard the grumbling of the Israelites. Tell them, ‘At twilight you will eat meat, and in the morning you will be filled with bread. Then you will know that I am the LORD your God.’”

After citing Exodus 16:12, Huppke feigned abhorrence at the announcement that McDonald’s will start serving breakfast all day. In his bootless burlesque, Huppke abhorred that McDonald’s would serve the same type of meal all day when God “separates” breakfast from dinner.

Here’s more snark from Huppke, who can’t tell when a metaphor has been extended waaay too long:

I realize my opinion might seem old-fashioned in an anything-goes age when most young people think it’s “A-OK” to eat a bacon, egg and cheese biscuit at 4 p.m….

LeeAnn Richards, an Arizona franchisee who led a task force that studied the all-day breakfast concept, said: “It’s nice when you can give people what they want, what they’ve been asking for.”

Maybe it’s nice for you, LeeAnn Richards of Arizona, but my beliefs cannot be swayed by public opinion, and they certainly won’t be changed by Big Burger’s cavalier redefinition of breakfast or by human belief in the separation of church and steak.

The question is: Will people of faith, the ones charged with serving scrambled eggs at immoral hours, stand up to this assault on religious liberty? I have hope that they might, thanks to the actions of Kim Davis, a county clerk in Kentucky who has refused to issue same-sex marriage licenses despite the U.S. Supreme Court’s ruling that makes “issuing same-sex marriage licenses” part of her job description.

“It is not a light issue for me,” Davis said through her lawyers. “It is a heaven or hell decision.”

Amen, sister! It’s crucial that you keep the government that pays you from imposing its will on the faith you are willfully imposing on everyone else. (That’s definitely in the Bible somewhere.)

I hope Davis’ resilient belief that marriage is between a man and a woman will inspire McDonald’s workers who share my belief that a breakfast is between 5 a.m. and 10:30 a.m. And I hope those workers will stand strong and refuse to issue Egg McMuffins to customers outside of traditional breakfast hours.

You must stay strong, McDonald’s workers. Let Kentucky’s most famous county clerk be your inspiration. And remember this other verse from the Bible:

“Therefore let us not pass judgment on one another any longer, but rather decide never to put a stumbling block or hindrance in the way of a brother.”

On second thought, forget that one. Just believe that your religious convictions trump everyone else’s rights and don’t give anybody breakfast after 10:30 a.m.

Of course, more literate biblical readers know that multiple literary genres are found in the books of the Bible. The first 18 chapters in Exodus constitute history, and the verse Huppke chose is not a prescription or command regarding what to serve at breakfast and dinner. It is, rather, an historical account of what God did. God provided manna—that is, bread—in the morning and quail in the evening to the Israelites whom he had recently freed from bondage.

In contrast, both the Old and New Testaments tell us what marriage is, and expressly prohibit homoerotic activity.

Literate readers of Scripture also recognize a metaphor when it knocks them upside the head. The manna from Heaven that God promises and provides is also an image and prefigurement of Christ who is the bread of life.

When Huppke cites Romans 14:13 (“Therefore, let us not pass judgment.…”), he exposes his ignorance again. In the book of Romans, Paul is discussing how to unify Gentile followers of Christ with Jewish followers of Christ who came with prior customs, like dietary practices, that are no longer required. Paul is instructing Gentiles not to cause division over these non-essential matters. If this verse were a general or absolute prohibition of all moral judgments, Paul would be guilty of violating his own words because the book of Romans is rife with moral judgments about essential matters.

“Progressives,” displaying the kind of biblical ignorance Huppke displays, often try to play “gotcha” with Christians who believe that Scripture condemns homoeroticism. These “progressives” will cite scriptural passages about slavery, or Old Testament prohibitions of shellfish-eating, or of mixing fabrics in clothes, thinking that they’ve offered foolproof evidence of the Bible’s moral unreliability when actually all they provide is evidence of their own foolishness.

Huppke erred in another way. He pointed to the marital failures of Kim Davis as a way to, I guess, suggest that she has no right to make distinctions about the nature of marriage based on Scripture. While Huppke ridiculed Davis’ marital transgressions, he declined to share reports that her marital failings occurred before she became a Christian.

Apparently, Huppke believes only morally perfect humans are entitled to express ontological or moral propositions or try to live in accordance with them. In the service of moral and intellectual consistency then, perhaps Huppke, who quite frequently expresses his moral propositions, should provide evidence of his moral perfection.

Perhaps Huppke could share too what he thinks about Martin Luther King Jr. It is well known that he was unfaithful to his marriage vows and plagiarized significant portions of his doctoral dissertation, and yet most Americans view him as a towering moral leader, who, by the way, advocated civil disobedience when manmade laws fail to conform to God’s laws and the natural law. I’m not suggesting that Kim Davis’ actions are equivalent to the work of Martin Luther King Jr. Rather, I’m suggesting that moral failings don’t necessarily render persons incapable of acting in the service of truth. Just ask Bill Clinton.

In Huppke’s risible attempt at an analogy, he describes the change in McDonald’s menu as an “abomination,” a term that is used in the Bible to refer to homoerotic acts—not to God’s provision to the Israelites of manna in the morning and quail at night. In so doing, Huppke brings into even starker relief not only his biblical ignorance but also his ignorance of the nature and public purposes of marriage.

Marriage has an inherent nature central to which is sexual differentiation. Children have an inherent right to be raised whenever possible by a mother and a father, preferably their own biological parents. And the public good is served in incalculable ways by recognizing and protecting marriage and children’s rights.

So, precisely what was Huppke’s purpose?

Was he mocking the Bible in its entirety—a compilation of texts the meaning of which he seems not to grasp?

Was he mocking Christians for taking Scripture seriously?

Both conservatives and “progressives” agree that elected government officials, those employed by the government, and citizens in the private sector ought to obey laws. Both sides also agree that civil disobedience is occasionally morally justifiable. The two sides just disagree on which laws (or Supreme Court decisions) are so egregiously unjust and irrational that civil disobedience is warranted or justifiable.

So, when conservatives waxed angry about President Obama’s or Eric Holder’s refusal to defend the duly enacted Defense of Marriage Act, they—conservatives—were not angry about Obama’s, Holder’s civil disobedience per se. Conservatives were angry that they refused to defend a just and rational law—one which, to paraphrase Martin Luther King Jr., conformed to both God’s law and natural law.

Let’s imagine that five unelected U.S. Supreme Court justices were to apprehend within the Constitution’s emanations and penumbra a phantasmagorical justification for prohibiting interracial marriages. Would Huppke become incensed if a county clerk were to continue to issue marriage licenses to interracial couples? And what would Huppke think if she, like Martin Luther King Jr., were to cite her religious beliefs as justification for her action?

Regardless of what happens in Kentucky, it’s just a matter of time before another case of civil disobedience arises and perhaps one that will be less fraught with intellectual and moral complexity. Imperious “LGBTQQIAP” activists who demand that even the First Amendment yield to their social and political agenda will brook no dissent. As New York Times lefty Frank Bruni hopes, soon the exercise of religious liberty will be restricted to heart, home, and pew. Dare to trot it out in the public square, and in the brig you will go.