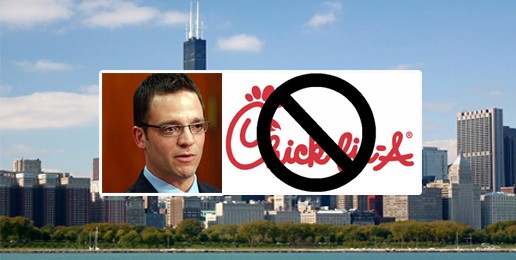 Last Wednesday, also known as Chick-fil-A Appreciation Day, was a very encouraging day for anyone who values the First Amendment and who believes that government doesn’t create marriage and ought not try to deconstruct it.

Americans turned out in droves to demonstrate their support for free speech, religious liberty, and true marriage. They showed their support by patronizing Chick-fil-A, waiting patiently for hours to demonstrate with their time and their money that First Amendment rights and marriage matter.

For those who have been vacationing in some Internet-free wilderness, Chick-fil-A’s president and COO Dan Cathy has been vilified for stating in an interview with a Christian organization that he believes marriage is the union of one man and one woman and for donating money to organizations that are trying to maintain the legal definition as such.

The mayors of Chicago, Boston, and Washington D.C. as well as Chicago Alderman Proco “Joe” Moreno and New York City Council speaker, lesbian Christine Quinn, in effect, told the entire nation that conservatives are unwelcome in their cities. In so doing, they revealed a willingness to abuse power and an embarrassing degree of constitutional ignorance.

Quinn wrote this in a letter to the president of New York University:

NYC is a place where we celebrate diversity….We revel in the diversity of all our citizens and their families….Let me be clear—I do not want establishments in my city that hold such discriminatory views. We are a city that believes our diversity is our greatest strength and we will fight anyone and anything that runs counter to that….As such I urge you to sever your relationship with the Chick-fil-A establishment that exists on your campus. (emphasis added; irony Quinn’s)

The good news is that outside the irrational, hypocritical, bullying world of homosexual activism, these five received widespread condemnation even by progressive pundits and the ACLU.

The Strange Theology of Alderman Moreno

Cardinal Francis George responded  to Rahm Emanuel’s claim that support for true marriage is inconsistent with Chicago values (which may be true, if Emanuel is using “Chicago” as a presumptuous synecdoche for himself).  Christians, both Catholic and Protestants, have been encouraged by his unequivocal words, a portion of which are quoted here:

Recent comments by those who administer our city seem to assume that the city government can decide for everyone what are the “values” that must be held by citizens of Chicago. I was born and raised here, and my understanding of being a Chicagoan never included submitting my value system to the government for approval…. The State’s attempting to redefine marriage has become a defining moment not for marriage, which is what it is, but for our increasingly fragile “civil union” as citizens.

The Chicago Tribune reports that Alderman Moreno had this to say about Cardinal George and the Bible:

“It’s unfortunate that the cardinal, as often happens, picks parts of the Bible and not other parts,’ said Moreno, who added that he was raised Catholic in western Illinois, attended a Catholic grade school and was an altar boy. Moreno said he now occasionally attends church.

“The Bible says many things,” Moreno said. “For the cardinal to say that Jesus believes in this, and therefore we all must believe in this, I think is just disingenuous and irresponsible. The God I believe in is one about equal rights, and to not give equal rights to those that want to marry, is in my opinion un-Christian.”

The Look of Love

Pandering politicians like mayors Rahm Emanuel, Tom Menino, and Vincent Gray have a greater commitment to currying favor with homosexual activists, who have become increasingly brazen in part because of conservative cowardice, than they do to protecting constitutional rights.

The behemoth of homosexual activism has grown by gorging on political and judicial power, academia, the mainstream press, the entertainment industry, and the arts. Now it stands slavering over the church and marriage. It licks its chops while waiting for these last delectable morsels of civilized life to be handed to them on a silver platter by an obsequious public afraid of confrontation and persecution. Yum, yum, eat ‘em up.

And they’re no fools. They gussy themselves up in Sunday-go-to-meetin’ finery, deceiving America—especially America’s gullible youth—with the language of love and “social justice,” keeping their gimlet eyes affixed on images that appeal and beguile. Homosexual activists keep Americans from the hard intellectual work of critically analyzing their flawed presuppositions, propositions, and analogies:

Throughout the Chick-fil-A imbroglio, a number of commentators have said that although Dan Cathy has a right to express his views and donate his money to whatever cause he wants, getting involved in controversial social issues is just bad business practice. It’s curious that I have never heard those same pundits fret about the “bad business practices” of Jeff Bezos, founder and CEO of Amazon who just donated $2.5 million to defend same-sex marriage in Washington State; Disney; General Mills; Home Depot; JC Penney; Marriott; Microsoft; Nabisco; Office Depot; Starbucks; or Target, all of which have very publicly taken sides on the controversial issue of homosexuality.

The Firing of CFO Adam Smith

Adam Smith, the CFO and treasurer of a medical device manufacturing company in Tucson, Arizona, and a lecturer at the University of Arizona, visited a Chick-fil-A on Wednesday, recorded his conversation with the young woman who waited on him, and then posted his recording on YouTube. He is now the former CFO and treasurer of the medical supply company, Vante.

Some are arguing that he shouldn’t have been fired and that conservatives are hypocritical for not supporting his right to express his views. That line of thinking seems flawed. Adam Smith’s problematic behavior was not the expression of his political or religious views. The problems were, first, he publicly impugned the character of a young woman whom he did not know, saying to her, “I don’t know how you live with yourself and continue to work here.”

Second, he continued to record her even after she told him that she was uncomfortable with him recording her.

And finally, he posted this recording, presumably without her permission, online. If this remarkably poised and respectful young woman is under 18, Smith’s actions may not have been merely rude and inconsiderate, they may have been illegal.

The lack of respect for the feelings of this young woman and his lack of judgment in posting his video are more than sufficient justification for his firing.

Some claim that this incident was “really just about the First Amendment.” It wasn’t. It was equally about the truth of marriage. It was equally about whether marriage has an objective status and whether our government should recognize, promote, and regulate it—or whether it should be deconstructed to accommodate the desires of a small group of people with specious arguments, abusive voices, political power, and deep pockets.

Let’s hope Americans will not slip back into inertia, acquiescence, and cowardice. As Michael Medved said, Wednesday was inspiring.