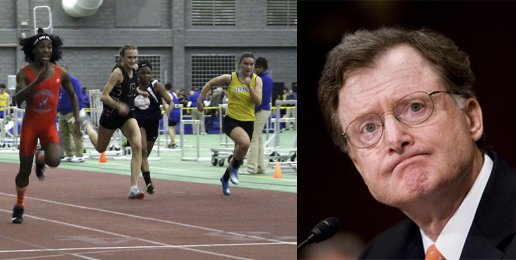 Let’s take a 10-minute break from reading about the Chinese Communist government’s gross malfeasance to look at the malfeasance of an American judge who thinks he has the authority to mandate Newspeak.

In February the Alliance Defending Freedom (ADF) filed a lawsuit on behalf of three members of girls’ high school track and field teams in three different Connecticut high schools, claiming that the girls’ rights are being violated by the schools allowing biological boys who pretend to be girls to participate on the girls’ teams. The defendants are the Connecticut Interscholastic Athletic Conference and four Connecticut school boards. Controversial U.S. District Judge Robert N. Chatigny ordered ADF attorneys to refer to the boys as “transgender females,” describing ADF’s use of the term “males” as bullying.

First some background on Chatigny: In 2010, Barack Obama tried to move Chatigny up to the Second Circuit Court of Appeals, but his nomination met with opposition due to Chatigny’s “empathy” for child rapist/murderers. A Washington Times editorial called his nomination an “abomination”:

The [Senate Judiciary] committee should kill the federal appeals court nomination of Federal District Judge Robert N. Chatigny of Connecticut. … Judge Chatigny has a weird record of empathy for those accused of sexual crimes involving children. … [T]he U.S. Supreme Court eventually reversed Judge Chatigny, unanimously, when the judge tried to rule against one aspect of his state’s version of a Megan’s Law sex-offender registry. In 12 child-pornography cases, Judge Chatigny imposed a sentence either at or more lenient than the recommended minimum—with most downward departures involving sentences less than half as long. And in an outrageous case of judicial abuse, Judge Chatigny threatened to take away an attorney’s law license if the lawyer failed to appeal the death sentence of an eight-time murderer of girls and young women. The judge claimed the killer’s “sexual sadism” was a mental disorder that made the murderer himself a victim.

In an April 16 conference call with ADF attorneys, Big Brother Chatigny issued this astonishing command regarding the boys on the girls’ track teams:

[Y]ou must refer to them as “transgender females” rather than as “males.” Again, that’s the more accurate terminology, and I think that it fully protects your client’s legitimate interests. Referring to these individuals as “transgender females” is consistent with science, common practice and perhaps human decency. To refer to them as “males,” period, is not accurate, certainly not as accurate, and I think it’s needlessly provocative. I don’t think that you surrender any legitimate interest or position if you refer to them as transgender females. That is what the case is about. This isn’t a case involving males who have decided that they want to run in girls’ events. This is a case about girls who say that transgender girls should not be allowed to run in girls’ events. So, going forward, we will not refer to the proposed intervenors as “males”; understood?

What a galling display of arrogance in the service of an incoherent, ignorant, and destructive ideology. “Transgender female” is a leftist term created to propagate an ideology. Forcing ADF attorneys to use it does not protect their clients’ interests. It does exactly the opposite. It undermines their interests while promoting the interests of the defendants, the boys who are violating the rights of the girls, and the “trans” cult.

Exactly what “common practice” is Big Brother Chatigny referring to? The common practice has forever been to refer to biological males as males. Even today, millions of people refer to biological males who pretend to be, or wish they were, or falsely believe they are female as males. Sure, leftists like Big Brother Chatigny are hell-bent on coercing common practice to change via commands, fines, and laws, but their efforts violate the First Amendment rights of those who seek to speak truth that is consonant with hard science.

Big Brother Chatigny makes the absurd claim that referring to biological males as males is “not as accurate” as his PC choice of the PC term “transgender females,” which is merely a political stepping stone to the next step when the “trans” cult demands “transgender” be dropped.

In Transtopia where “transgender females” are females, why should they be discriminated against by being referred to as “transgender females”? If other females (you know, actual females) are just called “female,” so too should biological males who pretend to be females. When that day arrives, Big Brother Chatigny will surely command those who appear before him in court to stop saying “transgender females,” UNDERSTOOD?

With no sense of irony, Chatigny argues that human decency requires humans to participate in an elaborate deception that denies biological reality, mutilates bodies, disrupts healthy biological processes, and requires both lying and violating the privacy rights of others.

Chatigny argues that referring to biological males who pretend to be female as “males” is “needlessly provocative.” Has the man utterly lost his capacity for rational thought? Does he really not see that commanding others to refer to males as females is needlessly provocative? Adding “transgender” to “females” does not make it less provocative.

Leftists arrogate to themselves the unilateral right to redefine every term that suits their moral, philosophical, or political purposes. They get to redefine marriage, love, safety, tolerance, bigotry, bullying, hatred, he, she, female, male, and now “provocative.” Like a gang of scornful Humpty Dumpties, leftists proclaim, “When I use a word, it means just what I choose it to mean—neither more nor less.”

Yes, this case is exactly about males running in girls’ track and field events. Does he think there exists no such objective phenomenon as biological males in nature? Does he believe biological male is merely a construct, idea, or epiphenomenon of the mind made real or instantiated only by the commingling of thought and desire?

George Orwell warned about the political abuse of language by oppressive governments which he called “Newspeak”:

The purpose of Newspeak was not only to provide a medium of expression for the world-view and mental habits proper to the devotees of IngSoc, but to make all other modes of thought impossible. It was intended that when Newspeak had been adopted once and for all… a heretical thought… should be literally unthinkable, at least so far as thought is dependent on words. Its vocabulary was so constructed as to give exact and often very subtle expression to every meaning that a Party member could properly wish to express, while excluding all other meaning and also the possibility of arriving at them by indirect methods. This was done partly by the invention of new words, but chiefly by eliminating undesirable words and stripping such words as remained of unorthodox meanings, and so far as possible of all secondary meaning whatever. … [T]he special function of certain Newspeak words … was not so much to express meanings as to destroy them.

That is exactly what the “trans” cult and it’s “progressive” sycophants like Chatigny are doing.

Fortunately for their plaintiffs and all the rest of sane society, ADF will not yield to the unseemly, unconstitutional commands of Big Brother.  The ADF filed a motion asking that the judge recuse himself, arguing that “A disinterested observer would reasonably believe that the Court’s order and comments have destroyed the appearance of impartiality in this proceeding. That requires recusal.”

Kudos to and prayers for ADF.

We take very seriously the trust you place in Illinois Family Institute when you send a gift. We understand that we are accountable before you and God to honor your trust. IFI is supported by voluntary donations from good people like you.