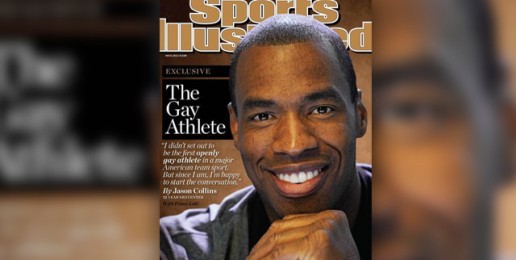 As most of the nation now knows, NBA player Jason Collins recently announced in a splashy Sports Illustrated article that he is homosexual, an announcement characterized by White House Spokesman Jay Carney as courageous.

After President Barack Obama had concluded a press conference and left the lectern, a reporter asked a question about Jason Collins. Obama uncharacteristically returned to the lectern to say that he “ couldn’t be prouder” of Jason Collins for announcing he is homosexual. What a dispiriting time and place this is that the president of this great but declining nation can’t think of any action that a professional athlete could do to make him “prouder” than having him announce he’s sexually attracted to men. And what a terrible message both men have sent to our nation’s children.

The First Lady of our declining nation then announced that she’s “got Collins’ back,” which raises the question, from what might she need to protect Collins? From the gushing mainstream press? From the rhapsodic Hollywood elite who suffer from an astonishing dearth of philosophical diversity (and depth) on homosexuality?

Oh, wait, it must be those intimidating pastors, priests, theologians, philosophers, and other conservative scholars writing erudite papers on the nature and morality of homosexuality and marriage that no one reads who pose a threat to Collins. Collins can breathe easier knowing that fit-as-a-fiddle Michelle Obama will defend him against those brainiac bullies with her uber-buff arms.

Like so many other words manipulated by the Left, “courage” has taken on a whole new meaning. In fact, it now means the opposite of what it used to mean. Courage is now demonstrated by publicly affirming the fallacious values, beliefs, ideas, and behaviors that our Leftist-dominated culture celebrates. Courage is demonstrated by publicly affirming those values, beliefs, ideas, and behaviors when doing so not only costs nothing but elicits encomia galore.

In my state of utter unhipness, I think Barronelle Stutzman, the 70 year-old florist in Washington State, is heroic. Because of her faith in Christ, Ms. Stutzman steadfastly refuses to use her gifts, time, and labor to profit from a same-sex “wedding” and consequently is being sued by the State of Washington. I wonder what the Obamas, who claim to be followers of Christ, think of Ms. Stutzman. I wonder if President Obama is proud of her. I wonder if Mrs. Obama has got her back. I wonder if the mainstream press will ask the Obamas if they think Stutzman is courageous.