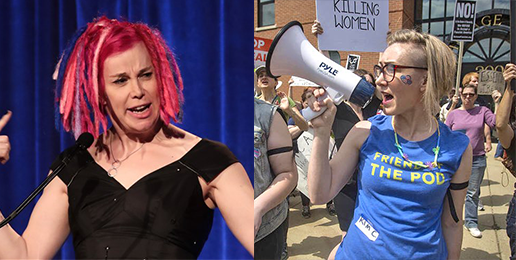 Last Thursday night, District 211—the largest high school district in the state with 12,000 students and five high schools—held a board meeting to discuss Superintendent Daniel Cates’ boneheaded proposal to allow students who “identify” as the opposite sex to have unrestricted access to the locker rooms of opposite-sex peers. Expecting a large crowd, the district moved the meeting to Palatine High School. The Daily Herald reported that 25 speakers were randomly selected, 16 of whom opposed the proposal, which is well over 50 percent.

Several years ago, when the district was first sued by a biological boy who was self-“identifying” as a girl, Cates allowed him to use the girls’ locker room as long as he changed clothes behind a privacy curtain. Cates steadfastly opposed this boy’s request for unrestricted access to the girls’ locker room. That was then, this is now. Now Cates proposes allowing boys and girls who pretend to be the sex they aren’t to have unrestricted access to the locker rooms of their opposite-sex peers. Perhaps Cates is spineless and follows the path of least resistance, which now leads into darkness. Perhaps he has morally devolved as so many school administrators have. Or perhaps his retirement at the end of this school year has freed his authentic inner corrupt self to emerge.

Cates couldn’t do this dirty work alone. It takes a village and at least four board members to indoctrinate children with an incoherent, irrational, and harmful ideology. One of those sorry villagers is the newly elected, morally corrupt, and unpleasant District 211 board member Kim Cavill, who is a sex “educator” when she’s not promoting feckless locker room policies.

If her name rings a bell, it’s because I mentioned her in an article about former District U46 school board member Jeanette Ward, a fearless, wise, and gracious woman who endured egregiously disrespectful treatment from fellow board members Traci O’Neal Ellis, Veronica Noland, and Melissa Owens. In an online post, Cavill referred to Jeanette Ward as the “High Priestess of the Order of Moron.” Oddly, that comment has been scrubbed from the Internet. Maybe she thought such a comment wouldn’t help her get elected to the District 211 board. Sounds a wee bit intolerant and hateful.

The curious story of the April 2019 election of Kim Cavill actually goes back to the even curiouser story of the 2017 school board election. Three well-qualified people who opposed co-ed private spaces for minors were running against three people who supported co-ed private spaces for minors. The three well-qualified challengers were,

We are fed up with this small group of vocal, transphobic people guided by a national hate group [Alliance Defending Freedom] wreaking havoc in our community…. Our District 211 community will not tolerate adults bullying kids or intimidating us for one more day. The ADF-inspired slate of candidates ran with the agenda of inserting a hate-based, national agenda into our schools. They didn’t care that their policy changes would increase bullying and violence against kids…. So we reached out to Trans United Fund and they helped us to get our message out to our neighbors and community members. (emphasis added)

The belief that biological sex is the source of feelings of modesty and the right to privacy when undressing does not constitute hatred of persons no matter how many times people like Salvatore and Cavill spread their repugnant lies.

I wonder if Salvatore spreads these same ugly and false lies about feminists—including lesbians—who oppose biological males in women’s private spaces. Perhaps Salvatore is unaware of the growing schism in the “LGBT” alliance. Just a week ago, a group of influential supporters of the “LGB rights” movement in the United Kingdom, including Stonewall UK founder Simon Fanshawe, published an open letter in the Sunday Times in which they criticize Stonewall and suggest it’s time for the formation of a new organization that is “committed both to freedom of speech and to fact instead of fantasy.” Here’s an excerpt from that letter that Salvatore, Cavill, and Cates should ponder:

Last October a group of LGB rights supporters asked Stonewall to “commit to fostering an atmosphere of respectful debate rather than demonising as transphobic those who wish to discuss, or dissent from, Stonewall’s transgender policies.” Since then, Stonewall has refused repeated requests to enter into any such dialogue…. We believe it has made mistakes in its approach that undermine women’s sex-based rights and protections. The most worrying aspect of this is that all primary-school children are now challenged to review their ‘gender identity’ and decide that they may be the opposite sex if they do not embrace outdated gender stereotypes.

Almost immediately after the school board election and defeat for all three good candidates, Cavill and her sister deactivated their Super PAC. Malignant Mission Accomplished.

And now we return our story to the school board election of April 2019. Kim Cavill, the person who orchestrated the ugly and deceitful campaign smear of three good people by creating a Super PAC front for a Super PAC financed by “LGBTQ” donors from out of the district, ran for the District 211 board and won. Is she really an emblem of good government and transparency?

If you are not yet convinced of her unfitness for serving on a school board or her unfitness to serve as a role model for children, here are just a smattering of quotes from her sex ed podcasts for children and teens.

One thing notable from sexpert Cavill’s podcasts is how studiously she avoids the words boy, girl, man, and woman. Even in her podcast explaining how babies come into existence, she never mentions men and women. Instead, she describes a “grown-up with a penis” and a “grown-up with a vagina.” Huh. I wonder what those are.

There are two lessons to be learned from this incredible story:

1. Local communities no longer control their own school boards and, therefore, their schools.

2. Cultural regressives are targeting the hearts, minds, and bodies of other people’s children—your children—and they’re using your money to do it.