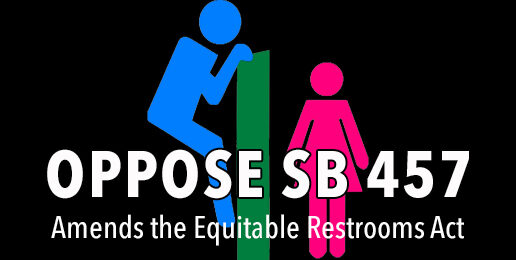 What will it take for decent, sane Illinoisans to organize and protest the loathsome laws coming out of the un-mucked out stable in Springfield? Maybe this bill will do it.

The purpose of this Section is to promote the privacy, safety, and gender inclusivity of all Illinois residents and visitors. …

Maybe a reporter could ask Bush what exactly a “different gender” from all genders is? And maybe someone could ask her how exactly the privacy and safety of Illinois girls and women are promoted via mixed-sex bathrooms. In the meantime, Illinoisans should cogitate a bit on the rest of this dung heap of a bill.

For those who don’t remember, Melinda Bush was one of the prime movers of Illinois’ malignant “Reproductive Health Act,” more accurately called the Kill Babies Bill. Apparently, there are a lot of Grayslake voters who don’t much care about girls of any age.

This is the primitive, uncivilized dystopia leftists are socially constructing and imposing on all Americans: a world without modesty and privacy. To them, accommodations for modesty and privacy point to sex differences, and that is something they will not abide.

If biological sex as manifest in biology and anatomy has no intrinsic and profound meaning relative to undressing, nudity, or intimate bodily functions, then there remains no reason for any sex-segregated private spaces anywhere for anyone.

If biological sex is a superficial trait as unimportant as skin color, then it makes no sense for any woman to prefer female gynecologists for exams or prefer female x-ray technicians for mammograms.

But if objective, immutable biological sex is intrinsically and profoundly meaningful with regard to feelings of modesty and the desire for privacy when engaged in intimate bodily functions or undressing, then the refusal to respect and accommodate biological sex differences in private settings is evil.

Make no mistake, this is coming to all public spaces in all states. The “trans”-cult will leave no corner unsullied by its delusional and evil beliefs and practices, because the presence of any cultural recognition that biological sex exists and has meaning threatens the shaky ideological grounding of their cult-like, science-denying beliefs.

As I wrote two weeks ago,

Leftists have their gimlet eyes always focused on the big picture as they play the long game to rule the country. While conservatives dismiss the “little” offenses and fume briefly about the big offenses against decency, morality, and truth, leftists continue their march through every institution that shapes culture.

Slowly they come, step by step, prepared for the wailing of conservatives, full of sound and fury, signifying nothing. Leftists bide their time, knowing the annoying sound and fury will shortly abate. Exhausted, conservatives will go home, abandoning all that messy, unpleasant opposition to the culture-unmaking of leftists. Conservatives won’t organize, won’t persevere, and won’t sacrifice. And the ones who do fight the evil-doers are alone and isolated because the masses of conservatives don’t want to do the hard work of culture-making.

What Illinois and the nation need are a few good men and women to rise up and lead a movement of all decent people against this injustice. Just imagine what kind of country we will bequeath to our children and grandchildren if we continue to do nothing now.

Take ACTION: Click HERE to send a message to your state senator and state representative. Urge them to vote against SB 457 and the foolish agenda that fails to recognize biological facts. Ask them to protect the privacy, dignity and safety of all Illinois citizens.