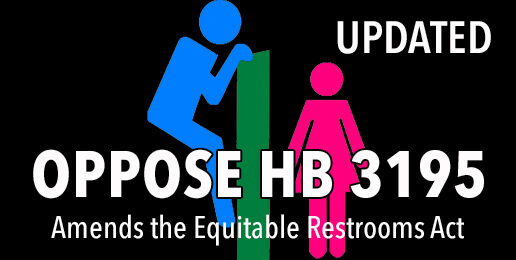 Two months ago, I first warned about a screwball amendment (HB 3195) to the “Equitable Restrooms Act,” which has now been passed by the muck-making bureaucracy we call the Illinois House of Representatives by a vote of 63-43 and is now being considered by the Illinois Senate. Here’s a section of that screwball, privacy-denying amendment:

The purpose of this Section is to promote the privacy, safety, and gender inclusivity of all Illinois residents and visitors. …

Further, if a new co-ed multiple-occupancy bathroom is constructed, any bathroom nearby must also be a co-ed bathroom.

Cross-dressing men like “Martine” Rothblatt and “Jennifer” Pritzker use their wealth and political power to normalize their deviant sexual fetishes. Some may remember that the big burly RINO “Jennifer” Pritzker published an editorial threatening that if the GOP didn’t capitulate to his demands that the GOP affirm “trans”-cultism he would take his filthy lucre and stomp home in his man-sized stilettoes.

Both Pritzker and the eccentric Rothblatt—who has created his own religion which teaches that “death is optional,” as well as a creepy “humanoid robotic” bust of his actual wife programmed with hours of his wife’s “memories, feelings, and beliefs”—are pouring money into academia to promote their “trans”-cultic beliefs and practices.

Unfortunately, they’re not alone in using academia to promote “trans”-cultism. Just this week, the Chicago Tribune—almost always on the wrong side of history—had a splashy piece announcing the opening of the Chicago-based Center for Applied Transgender Studies, which “aims to combat misinformation and lack of trans-led research.” 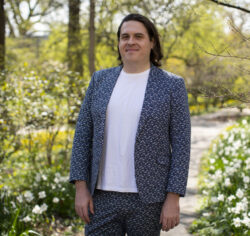 They mean research whose results are pre-ordained, including poorly constructed “social” science research.

The founder, TJ Billard, is a foolish assistant professor at Northwestern University—a man who self-identifies as a “non-binary” “scholar of political communication and media activism” who wants adults to refer to him by the pronouns “they/them.” #eyeroll.

The managing director of the Center for Applied Transgender Studies is also a sexually confused man who goes by Erique Zhang (formerly Eric Zhang), who also expects to be referred to by plural pronouns.

In an interview with the equally foolish Joan Esposito, Billard expressed his hope that the center, composed of him, his two co-founders, “17 senior research fellows and 10 junior fellows” would influence public policy, presumably including policies pertaining to the sexual integration of private spaces. 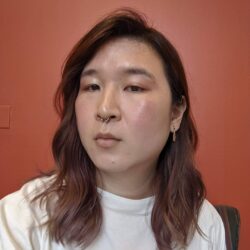 “Trans”-cultists seek to impose on the world their metaphysical claims and dubious psychological beliefs in the hope of having their feelings and fetishes treated as healthy, normal, and essential components of their “authentic identities.”

But society has no obligation to act as if the false ontological and moral assumptions of “trans”-cultists and their ideological allies are true. And, by the way, we don’t have to capitulate to their language commands.

Take ACTION: Click HERE to send a message to your state senator to ask him/her to vote against HB 3195 and the foolish agenda that fails to recognize biological facts. Ask them to protect the privacy, dignity and safety of all Illinois citizens.