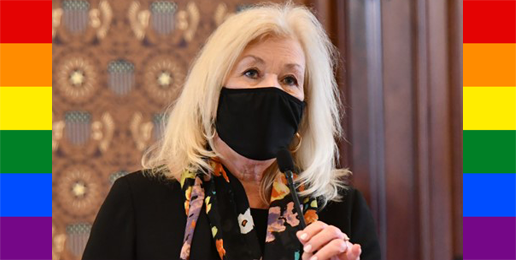 Illinoisans who are struggling to make ends meet as the Democrat-ruled state teeters on the knife edge of insolvency and whose children are suffering grievously from social isolation and missed milestones that can never be recovered have been waiting for the General Assembly to take action. Illinois families of diverse colors, especially those who lack the financial resources to weather a pandemic, a grossly inept response to a pandemic, government corruption, and decades of egregiously irresponsible economic policies have little choice but to wait for tyrannical, inept, irresponsible and corrupt leaders to help them.

As dispirited Illinoisans waited with labored breath for help, Illinois Senator Julie Morrison (D-Lake Forest) came to the rescue, introducing a bill on January 21, 2022 that if passed will amend a gazillion “Acts concerning children.”

With hopes raised a smidge, Illinoisans wondered how Morrison would help their children.

Maybe Morrison is addressing the urgent need to get children back in school—unmasked.

Maybe she’s calling for school choice, so impoverished families will have the freedom to choose how their children are educated.

Maybe she is taking on public schools like those in Deerfield whose “educators” teach obscene material to other people’s children.

Maybe she’s addressing the scourge of children in the womb being slaughtered or taxpayer-funding of human slaughter.

Maybe she’s got a plan to weaken the power of teachers’ unions that care more about preventing teachers from teaching and about setting social policy unrelated to education than they do about children.

Maybe, Morrison will try to get “comprehensive” sex ed and “lgb” and “t” advocacy out of our publicly subsidized kindergartens.

Oh no, Morrison’s proposed bill “concerning children,” SB 3961, (and HB 4626 in the Illinois House) addresses far more urgent issues.  Morrison along with chief co-sponsor Melinda Bush (D-Grayslake) who jumped aboard on Monday, and co-sponsors Laura Fine (D-Glenview) and Cristina Castro (D-Elgin) have introduced a bill that will expunge every occurrence of the pronouns “he,” “she,” “his,” and “her” from existing laws pertaining to children. These women (can’t be too sure these days) also seek to bowdlerize laws that mention “uncle, aunt, nephew, niece, great-uncle, great-aunt, step mother, step father, step sister, step brother.”

Ahhhh, finally, a real proposal to help suffering Illinoisans, many of whom are making plans to hightail it out of the state. Illinois will once again be a grand and glorious place to raise children when all biologically based pronouns and terms are expunged from law and, it is hoped, from our collective memory. When the heartland never again permits public recognition of the bi-biodiversity (i.e., the sexual dimorphism) of the human species, Illinoisans can stop worrying and be happy. And Morrison and her collaborators can pat themselves vigorously on the back for a dirty job well done.

Take ACTION: Click HERE to send a message to your state lawmakers to ask them to vote down SB 3961 and HB 4626. You may want to point out that the people of Illinois do not want lawmakers to re-write the English language to accommodate the demands of a group of left-wing ideologues. They have other priorities that demand their attention during this abbreviated session. Spending time to push legislation that would eliminate pronouns is a non-starter.

Please also contact your state senator by phone during normal business hours via the Capitol switchboard: (217) 782-2000.