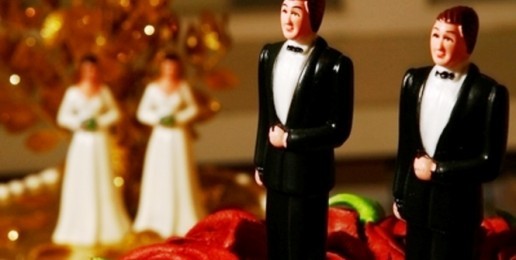 October 10, 2008, was a crisp, sunny day in San Francisco. Shirley Holcomb and other women from the Evangelical Church had gathered at noon for Bible study. The passage they contemplated that day was the parable of the 10 virgins. As she read silently, Shirley could not imagine how the foolish virgins could have slept as the wedding day approached. Shirley shook her head and sighed. This never would have happened on my watch, she thought. In closing, the women bowed their heads in prayer. As they had been doing every Friday for years, Shirley and her Christian friends prayed that the spiritual darkness draped over San Francisco like a heavy woolen blanket would be lifted. A half-hour later Shirley departed, confident God would soon answer her prayer.

That same Friday was also the perfect day for a wedding. On the other side of San Francisco first-graders from a local public school were taken on a field trip to city hall to attend the wedding of their teacher, Erin Carder, which was being performed by Mayor Gavin Newsome. The school children were giddy as they lined the steps of city hall and threw rose petals in the path of the bride, who wore a beautiful white wedding dress and a long flowing veil. As the first-graders cheered and clustered about the newly-wedded couple, the bride turned to kiss … her bride. Later in the day, six-year-old Alyssa Holcomb went to visit her grandmother Shirley. She was very excited and could hardly wait to tell her “nana” about her teacher’s wedding.

The first scenario above is fiction. Sadly, the second is true. On October 10, 2008, first-grade teacher Erin Carder married her lesbian lover, Kerri McCoy. San Francisco Mayor Gavin Newsome officiated and Carder’s first-grade students attended. Carder’s was one of approximately 14,000 homosexual marriages performed legally in California between May 15, 2008, the day the California Supreme Court declared homosexual marriage to be a constitutional right, and November 4, 2008, the day California voters approved Proposition 8 and amended the state constitution to prohibit same-sex marriage. Whether Carder’s marriage is still valid remains unclear.

How did we get here?

In 1960 homosexual conduct was a felony in all 50 states. In the 1950s and 1960s the average American considered homosexual conduct to be sinful and criminal. Back then, homosexual activists knew that same-sex marriage would not become legal overnight and that their goals would have to be achieved incrementally over time. The plot to steal marriage took root and began to unfold in San Francisco in 1971, but its basic plan originated at least 15 years earlier.

The evolution of law concerning homosexuality officially began in 1955 when the American Law Institute (ALI) issued what it called its Model Penal Code. ALI urged all 50 states to adopt the Code in order to maintain uniformity of all state criminal laws. The Model Penal Code decriminalized all consensual, non-violent sexual conduct.

It was no secret that ALI had relied heavily on the works of Alfred Kinsey in writing the Code. Kinsey, a zoologist by education and training, undertook “research” in the 1940s to study the sex habits of human beings. His infamous “research” was published in two books: Sexual Behavior in the Human Male (1948) and Sexual Behavior in the Human Female in (1953). These two books, collectively known as the Kinsey Report, caused a sensation because their conclusions appeared quite inconsistent with the universally approved moral code in place in America at the time.

According to Robert Knight, former director of the Culture and Family Institute for Concerned Women for America, Kinsey’s books “revolutionized the study of sex, and provided a ‘scientific’ justification for sexual promiscuity, pornography, abortion, homosexuality and ‘child sexuality.'” In the 1940s and 1950s it was mistakenly believed that Kinsey’s “research” was collected and analyzed in accordance with accepted scientific methods; that is, the studies were carefully controlled and monitored so the data collected would be accurate and the results valid. Objectivity and control are critical in scientific studies because data improperly collected would produce unfounded conclusions.

Such was the case with Kinsey. In the book Kinsey: Crime and Consequences, Kinsey expert Dr. Judith Reisman estimates that 86% of the data collected by Kinsey was based on the self-observations and journal entries of previously incarcerated criminals and sexual deviates.

According to Knight, “Kinsey’s work was a thinly disguised attempt to misuse science to justify his own prolific sexual appetites and practices, which included group sex, homosexual sadomasochism, voyeurism, wife-swapping and his support for the idea of adult-child sex.”

Dr. Charles Socarides, a psychiatrist who dedicated most of his career to the study of homosexuality, wrote that the “[American Psychiatric Association] rationale for removing homosexuality from the list of mental disorders relied heavily on the work of Alfred Kinsey and his belief in the normality of homosexuality. … The Kinsey Report has had in several ways a severe and damaging delayed impact on our sexual mores, especially as they pertain to homosexuality.”

It was not the Kinsey report alone, however, that motivated the APA to remove homosexuality from its Diagnostic and Statistical Manual of Mental Disorders in 1973 but also extreme political pressure brought to bear by homosexual activists. Armed with the Kinsey Report, homosexuals now had the weapon they needed to attack the long-held cultural and religious belief that homosexuality was unnatural and abnormal. In his book Homosexuality and American Psychiatry: The Politics of Diagnosis, Dr. Ronald Bayer noted homosexual activists first attacked the APA in 1970 during the APA convention in San Francisco. According to Bayer, homosexual activists intentionally disrupted the conference by interrupting speakers and shouting down and ridiculing psychiatrists who viewed homosexuality as a mental disorder. In 1971, homosexual activist Frank Kameny worked with the Gay Liberation Front to demonstrate against the APA’s convention. At the 1971 conference, Kameny grabbed the microphone and yelled, “Psychiatry is the enemy incarnate. Psychiatry has waged a relentless war of extermination against us. You may take this as a declaration of war against you.” At the same time, homosexuals who had forged APA credentials gained access to exhibit areas in the conference. They threatened anyone who claimed that homosexuals needed to be cured. Intimidated by such threats, the APA two years later removed homosexuality from its list of mental disorders. Emboldened homosexual activists next leveled their sights on public schools, politicians, lawyers and judges.

The next year, in 1972, the National Coalition of Gay Organizations met in Chicago to strategize and craft a plan of action. The long-term battle plan adopted at this meeting would, if successful, result in the following changes: homosexuals infiltrating the public schools and presenting homosexuality as a valid, healthy lifestyle and as a viable alternative to heterosexuality; repeal of all state laws prohibiting private sexual acts involving consenting persons; repeal all state laws prohibiting solicitation and prostitution; legislation prohibiting discrimination because of sexual orientation; legislation permitting child custody, adoption, visitation rights, and foster parenting for homosexuals; repeal of all legislative provisions that restrict the sex or number of persons entering into a marriage unit, and the extension of legal benefits to all persons who cohabit regardless of sex or numbers.

In the ensuing years, homosexual activists accomplished 90% of what they set out to do in 1972. They successfully persuaded numerous local, state, and federal governments to amend or repeal civil and criminal laws to not only decriminalize homosexual conduct but also to give self-avowed homosexuals specially protected status under law.

Too little too late?

Why is this brief history important? Because Kinsey’s fraudulent “research” was the weapon used to gain homosexual marriage. As Resiman said, “Today, Kinsey’s ‘junk science’ is the unquestioned foundation for all the legal, legislative and media debate on marriage and civil unions.” The achievement of court-ordered same-sex marriage in Massachusetts in 2003 was the culmination of a carefully crafted plan that began in the 1940s. Homosexuals exhibited a remarkable endurance that Christians may be required to emulate.

Like the five foolish virgins, many in the church slept as gay activists hailed Kinsey and caused America’s Judeo-Christian foundation to be dismantled brick by brick. We watched as homosexuals threatened the medical profession; claimed to be victims; infiltrated public schools; demanded a place at the political round table; and lobbied state legislatures and city councils for equal rights.

It was only after traditional marriage was threatened that the church stood up and said, “Enough!” But by then it was too late. Not only had the homosexuals captured the schools and lawmakers, they had captured the courts, too. In a year or two the homosexualization of America will be complete, unless the body of Christ takes a bolder stand.

What Can I Do?