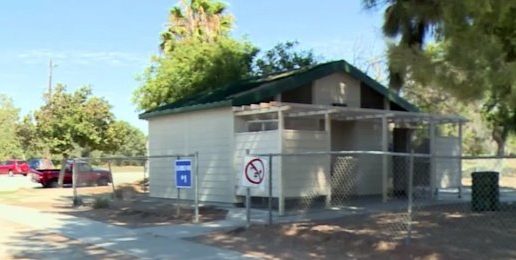 (caution: may not be suitable for younger readers)

Men seeking sex with men have been using a particular public restroom in San Jose, California for their semi-clandestine, wholly vile activities for some years. In fact, it’s become such a popular gathering place for men whose sexual predilections involve public lavatories and strange men that a picnic table has been set up by the country health department offering free condoms and pamphlets about HIV and other sexually transmitted infections/diseases. This popular site for perverse sex just happens to be immediately next to a baseball diamond used by children for their baseball games which are, of course, attended by their families.

Attorney Bruce Nickerson, panties in a twist over a 2014-2015 sting operation that resulted in two dozen men being charged with “among other things, loitering near a bathroom with the intent to commit a lewd act,” plans on filing a class action lawsuit against the police department.

Nickerson sees the sting operation as a gross violation of the 14th Amendment’s guarantee of “equal protection before the law.” How so, you may be wondering. After pouring over the arrest records of the San Jose Police Department for similar sting operations, Nickerson discovered “the department has not made any decoy arrests for male-female lewd conduct,” which he views as a clear violation of the 14th Amendment. So now taxpayers will foot the bill to defend the purported violation of the rights of men who seek to have sex with men in a public restroom.

In his lawsuit, Nickerson, who views his effort as “the gay equivalent of stopping Jim Crow laws,” will be asking not only that “the police department stop these stings, but will also ask for the arrests to be removed from the defendants’ records and a ‘modest’ cash settlement.”

San Jose lesbian activist Gabrielle Antolovich argues that “Arresting people does not change anything.” What she wants is “dialogue and discussion” between “two different kinds of people using the same space.”

I guess this is the kind of worldly “wisdom” we should expect from a lesbian who has been participating in and promoting perversity for decades. Back in 1990, the year she was “International Ms. Leather,” she shared (*warning: article contains offensive material not suitable for all audiences*) her views on lesbian sadism and masochism (S & M):

“Everyone has a different view of what whipping means to them. To the outside world, it all looks the same: flog, flog, flog. But when I have a whip in my hand, that’s an extension of me—from the whip to the person I’m whipping. For me, the whip is like a magic wand. When the body of the partner submits, it’s a gift.”

She stops and points to the center of her palm. “When you use a whip, this part of your hand gets hot. I discovered that in alternative medicine; this is the sexual meridian, the spiritual place. Have you noticed how in Renaissance and other religious paintings, this is where the light comes out?”

“Look, I go to S-M parties and sometimes I think, ‘I can’t believe I’m into this,'” Antolovich confesses. “It’s ugly. I want to throw up. So I go to the bathroom and tell myself, ‘This is your old attitude.’ Sometimes I look at my lover and say, ‘I can’t believe I want to do this to her.’ But I know it’s just the old stuff, the old propaganda.”

Antolovich says that in the long run the S and M life has made her wiser, more community-oriented, infinitely happier. “I have to be worthy to be given to. I have to develop in the way that a person wants to give to me. I look at my lover and I know I can have anything I want. And she knows she can too. It’s amazing. Think about that.”

Antolovich’s words are amazing. Her words illustrate that the abandonment of truth results in all manner of destruction and chaos, affecting human will, emotions, and thoughts.

Homosexual and sex-rejecting (aka “transgender”) activists have been abusing, exploiting, and perverting the U.S. Constitution to serve their sexually anarchistic cultural revolution for years. Their revolution recognizes no authority and few boundaries. The public good and truth of marriage and properly ordered sexuality, the rights of children, and the Constitution will be sacrificed on the twin altars of perverse sexual desire and absolute autonomy

Our Founding Fathers—deists and theists alike—must be whirling maelstroms in their resting places over the abuse of the U.S. Constitution to enable public homosex.

“The heart is deceitful above all things,
and desperately sick; who can understand it?”
~Jeremiah 17:9