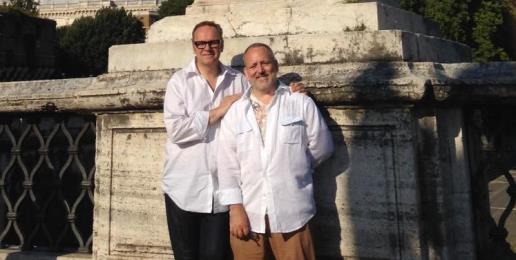 Holy Family Parish in Inverness, Illinois has been at the center of yet another controversy spawned by the unholy effort to impose a “progressive” sexuality ideology on the entirety of society, including churches. Holy Family recently fired its choir director, Colin Collette, following his Facebook announcement of his intention to “marry” his same-sex partner, William Nifong, a Chicago high school teacher.

Following his firing, a church meeting drew a large and impassioned crowd. What, you may ask, inflamed the passions of hundreds of parishioners? Was it the unholy union of a church leader, a union which violates both Scripture and Catholic doctrine?

Was it the indefensible acquiescence of church leaders to the serious and unashamed embrace of sin by Collette who says that church leaders knew he was homosexual and that he was in a same-sex relationship: “‘This has not been a secret,’ said Collette, who held the job at Holy Family for 17 years. ‘My partner has read for the church at Mass.…We have been living together for five years.’”

No. What inflamed the passions of many parishioners was the removal of Collette for his unapologetic embrace of sexual perversion—a sin that the God these parishioners claim to serve detests. Yes, even while loving his creation, God detests much of what we do, and some of the things we do, he detests more than others.

Chicago Tribune reporter Lisa Black quoted a Holy Family church cantor who resigned from his choir  position in protest, arguing that other “prominent ‘sinners’ in Christian history” had “retained high-ranking positions and questioning why a gay couple’s marriage is any different.”

Well, I’ll take a stab at that question.

Second, there is a difference between people who sin and repent and those who embrace sin while calling it non-sin.

The church is necessarily composed of sinners because that’s the only kind of human that exists. But failing to live perfect lives is wholly different from embracing, affirming, and celebrating sin as central to one’s identity—which is what Collette is doing. Church member Bob Garbacz said that “‘[Collette’s] just a pillar of that community. For the church to say you can’t be here because of this rule is ludicrous to us.’”

Of course, the belief that marriage is inherently a union between one man and one woman is not just a “rule.” It’s a reality established by God, affirmed by his son, and taught in his Word.

From all accounts, Collette seems to be a lovely man with many good qualities. But the presence of admirable qualities does not mitigate the offense of embracing and affirming sin. Nor do his admirable qualities render him automatically suitable for a leadership position.

This letter which appeared in the Chicago Tribune epitomizes the truly foolish thinking that has infected the minds of many contemporary Christians:

I am a member of Holy Family Parish in Inverness; I serve humbly in a ministerial and voluntary role. The unfairness and brutality of this recent decision to fire our choir director rests squarely at the doorstep of the Catholic hierarchy.

Our challenge as Catholics will be to forgive them.

So many errors, so little time:

1. The proximate cause of the decision to fire the choir director rests at the doorstep of the Catholic hierarchy. The ultimate cause is the ultimate law-giver: God. Scripture teaches with unequivocal clarity that marriage is the union of one man and one woman. Both the Old and New Testaments teach that homoerotic activity is profoundly sinful and abhorrent to God. The New Testament teaches that those who engage in homoerotic activity—among other sins—will not see the kingdom of God. The New Testament teaches that church leaders must live godly lives and that church members who are involved in serious sin for which they refuse to repent must be disciplined. Church discipline involves not just removal from church leadership but also when necessary expulsion from fellowship.

2. Church discipline for the unrepentant embrace of serious sin is painful and difficult, but it is neither unfair nor brutal. Failure to engage in proper, biblically-prescribed church discipline constitutes disobedience and puts at risk the eternal lives of those who embrace and affirm sin. Such dereliction of one of the most difficult ecclesiastical duties is unfair and brutal.

All Christians—and especially church leaders—who proclaim and promote as righteousness that which God abhors will one day beg for forgiveness, but not from their fellow Christians.