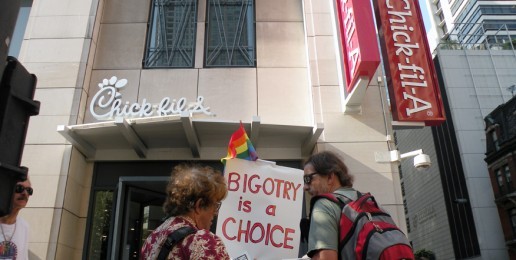 No matter how much ink has been spilled on the unconstitutionality of using government power to censor speech, including by scores of “progressives,” homosexual activists just won’t let up.

The Civil Rights Agenda (TCRA), yet another organization committed solely to normalizing homosexuality, has filed an absurd complaint against Chick-fil-A with the Illinois Department of Human Rights. Their claim is that Chick-fil-A violates “Section 5-102(B) of the Illinois Human Rights Act, which prohibits a ‘public accommodation’ from making protected classes ‘unwelcome, objectionable or unacceptable.’”

In their press release last Thursday, TCRA made clear their tyrannical and unholy demands on Chick-fil-A — demands that no serious Christian could accommodate. TCRA explained that they and Alderman Proco “Joe” Moreno  have been trying since last February to get Chick-fil-A to “examine” its corporate policies. Here’s what TCRA and Moreno want from Chick-fil-A:

Yes, TCRA and Moreno want to coerce an organization that is owned by theologically orthodox Christians to have policy that implicitly and/or explicitly teaches employees that homosexuality is ontologically and morally equivalent to heterosexuality, to provide benefits to unions that violate the clear teachings of Scripture, to advertise in a community that seeks to redefine marriage and family, and to subsidize hormone-doping and genital-mutilating surgery for the gender-confused.

The complaint from TCRA exposes a number of troubling issues:

1. The complaint reveals the serious problem with the ambiguous language in the Illinois Human Rights Act, which includes the following:

The sentence construction is odd and awkward. I suspect its awkward construction resulted from homosexuality advocates’ intent to use this for exactly the purpose it’s being used now. TCRA is using this section of the Illinois Human Rights Act to prosecute speech outside of the work place that they don’t like.

Dan Cathy’s expression of his beliefs about marriage had nothing whatsoever to do with customer service in Chick-fil-A restaurants, which are the only actions that this section of the Human Rights Act should legitimately address. His statements about marriage said nothing whatsoever about who is not welcome in Chick-fil-A restaurants. For this section of the Human Rights Act to be applicable to the Chick-fil-A situation would require that Dan Cathy knew that his statement of belief about marriage would make homosexual patrons be unwelcome — not feel unwelcome, but actually be unwelcome. There is no evidence that those who identify as homosexual are unwelcome in any Chick-fil-A in the country or that any employee has ever treated any homosexual customer as objectionable or unacceptable.

Quite the contrary. The anonymous couple on whose behalf TCRA is filing the complaint have said that until they learned of Dan Cathy’s beliefs on marriage, Chick-fil-A “was one of their favorite places to eat.” In other words, this couple and the child they are raising were treated well.

The problem is that the government has no right to prohibit speech simply because it hurts someone’s feelings. It’s both unconstitutional and dangerous to prohibit citizens, including business owners, from making moral or political claims about any issue, including sexuality and the nature of marriage. The First Amendment guarantees the right to express beliefs and opinions, especially unpopular opinions.

2. If TCRA’s reasoning were to be applied consistently, it would prohibit anyone who runs a business from ever expressing opinions on what constitutes moral behavior. If Dan Cathy’s expression of his belief that marriage is a sexually complementary union violates some fundamental anti-discrimination principle because it makes those who are in same-sex relationships feel bad, then does the expression of the belief that marriage is a union of only two people violate the same principle because it makes Fundamentalist Latter Day Saints who believe in polygamy feel bad?

Moreover, if Cathy’s expression of the belief that marriage is the union of one man and one woman makes homosexual couples feel unwelcome, and if their subjective (and erroneous) feelings that they are unwelcome constitutes proof that he violated the Illinois Human Rights Act, then what does it mean if a business owner says that marriage has nothing to do with sexual complementarity? Clearly, when a business owner expresses that idea, it means he thinks Christian, Muslim, and Orthodox Jewish beliefs about marriage are wrong. If Christians, Muslims, and Jews, therefore, feel unwelcome in businesses owned by people who express “progressive” beliefs, are those business owners guilty of engaging in religious discrimination, which is also prohibited by the Illinois Human Rights Act? After all, the religious beliefs of Christians, Muslims, and Jews are as central to their identity as are the sexual feelings and beliefs of homosexuals.

This intellectual and pragmatic sticky wicket points to the critical need to remove this ambiguous language from the Illinois Human Rights Act. No law should include language that could be interpreted in such a way as to make it illegal for a business owner to say publicly that he believes homosexual impulses are disordered, or that homosexual acts are immoral, or the there is no such thing as same-sex marriage; or that Illinois should not legalize same-sex unions; or that homosexuals should not be permitted to adopt, without fear of complaints or lawsuits. We should not have a law that contradicts the First Amendment to the U.S. Constitution which guarantees the right to speak freely on issues even when such speech offends someone.

Homosexuality is in some cases mutable (even “queer” theorists argue that “sexual orientation” is fluid) and is constituted solely by subjective feelings of attraction and volitional sexual acts that are perfectly legitimate to assess morally.

This raises the question that will surely soon emerge on the cultural landscape: Why should homosexuality and “gender identity,” which are constituted by subjective feelings and volitional acts, be included as protected classes in anti-discrimination laws but not other conditions similarly constituted? For example, why shouldn’t polyamory be included in anti-discrimination laws?

4. The complaint provides yet another example of how homosexual activists continually conflate disapproval of volitional sexual acts with disrespect or hatred of persons. The complaint states that Chick-fil-A has “made it clear the lives of LGBT individuals are unacceptable to them and that same-gender families are unwelcome at Chick-fil-A.” One would assume that the lives of “LGBT” individuals involve more than just their homosexual (or cross-dressing) acts. Expressing the belief that marriage is the union of one man and one woman, as Dan Cathy did, says nothing about what he believes regarding the totality of the lives of homosexuals. And judging from press accounts, there is no indication that his treatment of or interactions with homosexuals indicates that he believes their lives in their totality are unacceptable or that they are unwelcome in any Chick-fil-A restaurant. Has Jeff Bezos, founder, chairman, and CEO of Amazon who just donated $2.5 million to defend same-sex marriage, “made it clear that the lives” of theologically orthodox Christians are unacceptable to him because he thinks their beliefs on marriage and sexuality are wrong?

The Illinois Human Rights Act is a rhetorical and legal mess being exploited by those like The Civil Rights Agenda who have a pernicious obsession: the eradication or silencing of conservative moral beliefs about homosexuality. If the Constitution has to be shredded in the process, so be it.