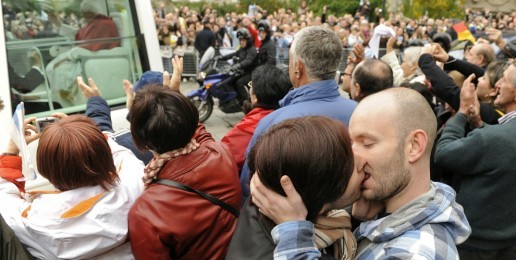 This past weekend, Pope Benedict XVI visited Spain where approximately 100 homosexual activists intentionally staged a kiss-in protest in front of the Barcelona cathedral.

This obnoxious and in-your-face protest was well covered by international press. But no where have I read or heard it referred to as anti-Catholic or Christianphobic — which it obviously was. While protests or dissenting comments against the political agenda of pro-gay leaders and politicians are routinely labeled “anti-gay” and “homophobic” by the press, for the dominant pro-gay media, this type of hate simply doesn’t fit into their narrative.

This kiss protest was intended to offend the Pope, the attending bishops, priests, as well as traditional Catholics and bible-believing Christians everywhere. It was utterly disrespectful, insensitive and entirely intolerant. I have to wonder why these gay activists never target a Caliph outside a mosque.

While the homosexual “rights” movement started by appealing for privacy in the bedroom for consenting adults, it has now moved brazenly to the public square demanding that we accept and even celebrate their sexual proclivities.

And if that isn’t enough, pro-gay groups like the Human Rights Campaign — which has a $40+ million annual budget — and Lambda Legal — which has a $20 million annual budget — seek to legislate and adjudicate gay, lesbian, transgender and bisexual choices as civil rights, as if their sexual choices are equal to skin color, to the detriment of those of us who hold moral and religious objections to this lifestyle.

These homosexual activists who proclaim the virtue of tolerance are thoroughly intolerant of conservative people of faith and moral conscience.