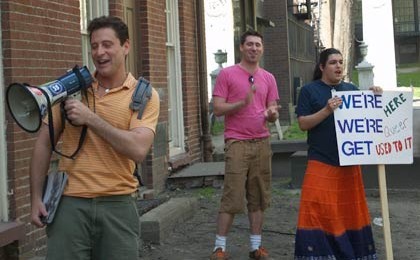 Imagine if this Scenario Were Reversed: One might suppose that homosexual militant Wayne Besen would be the last fellow to question the idea that “gay” activism threatens religious freedom in America. At right, Besen is photographed harassing a Boston church hosting an ex-“gay” conference – by yelling through a bullhorn into the window of the church during the conference. (Click HERE for MassResistance’s full story on the homosexual protest, and HERE for a report on a much larger and more violent pro-homosexual protest against another Boston church in 2005.) What if a bunch of Christian activists terrorized a meeting at a homosexual church in a similar manner? We suspect that Besen and fellow “gay” advocates might accuse them of using fascist tactics, and rightly so. Besen also wrote a hate-filled screed against Christian activist Michael Brown and his “God Has a Better Way” Gospel outreach at the Charlotte, NC “gay pride” festival. Homosexual activist Wayne Besen of the oddly named Truth Wins Out described Dr. Michael Brown’s group of evangelists (the “God Has a Better Way” campaign responding to the Charlotte, N.C. “gay pride” parade) as “uninvited locusts” descending on Charlotte. With that description in mind, I wonder how conservatives should describe the thousands of participants in “pride” parades and “fairs” who pollute our streets with illegal nudity and public sex acts to which law enforcement agents, who are paid by the public to enforce laws, turn a blind eye.

When Besen said that “the notion that gay people in conservative North Carolina needed Brown to educate them about religious fundamentalism was farcical,” he revealed his ignorance about Biblical and Historical Theology. Although the belief that homosexual acts violate God’s will is a belief held by “fundamentalists,” it also integral to all orthodox theological traditions and has been since the beginnings of the church. His ignorance is not surprising, however, since Besen is a member of the homosexual activist movement that regularly makes numerous ludicrous exegetical claims, including the claims that Ruth and Naomi and David and Jonathan had homosexual relationships.

Then Besen makes a patently false assertion when he states that homosexual activists are “falsely accused of working to undermine freedom of religion.” He may want to read the words of Georgetown University lesbian law professor, Chai Feldblum who writes that when same-sex “marriage” is legalized, conservative people of faith will lose religious rights.

Besen’s clouded vision is manifest in this description of a group of Christians engaged in evangelism: “Most alarming are these charlatans’ deliberate perpetuation of paranoia by trumpeting alleged religious persecution that exists only in their warped minds.” Perhaps Besen should talk to the Christian infertility doctors in California whom a lesbian sued when their religious convictions prevented them from inseminating a lesbian. Or perhaps he should talk to the Christian owners of a New Mexico photography studio who were sued and fined for “discrimination” when their religious beliefs prevented them from photographing the commitment ceremony of two homosexuals.

Perhaps Besen (left) should talk to the Christian mother in Alameda, Cal., whose public school is introducing pro-homosexual resources to first-graders next year. The school is refusing to notify parents prior to the presentation of these resources and is refusing to allow parents to opt out. Or perhaps he should talk to me about the efforts of change.org to get a hotel to break a legal contract with Illinois Family Institute because of our religious conviction that homosexual acts are immoral. Sounds remarkably like religious persecution to me.

What is confusing in Besen’s diatribe are these two seemingly contradictory claims: first, he said, “Brown tries to cover his tracks by sprinkling his apocalyptic rhetoric with calls for non-violence. Good orators, however, understand the principle of ‘layering’ messages. If in one sentence you speak of violence and in the next of non-violence, the listener will almost always embrace the words that support his or her belief system.” This clearly implies that Dr. Brown “spoke of violence in one sentence.”

But shortly thereafter, Besen said, “Brown, of course, doesn’t actually have to make an overt pitch for mayhem,” which seems to imply that Dr. Brown did not, in fact, “speak of violence.”

Besen takes issue with the proposition that the movement to normalize homosexuality tampers “with the foundations of human society.” Surely, he knows that this belief is not unique to Dr. Brown. It is widely held by theologians from most denominational traditions and by many legal scholars, philosophers, political commentators, sociologists, psychologists, and ordinary people of all educational backgrounds and walks of life. Many, many people view heterosexual marriage between one man and one woman who together produce and nurture future generations of children to be the foundational institution of any healthy society. Once society divorces marriage from children and marriage from gender, the institution becomes meaningless and the culture dies.

Besen goes on to say in his apoplectic way that “It is time for Brown and his comrades to abort their increasingly hostile and combative tactics before it leads to more wanton death.” This tactic of misrepresenting any public opposition to the ideologies and political actions of homosexual activists and their supporters as hate mongers, fomenters of violence, and bigots is the stock-in-trade of the “LGBT” movement. The logical implication of the argument that the expression of opposition to one group’s moral claims represents hatred, bigotry, and incitement to violence, however, would be that Besen’s words represent hatred, bigotry, and incitement to violence against Christians, and Orthodox Jews, and Muslims, and secular conservatives.