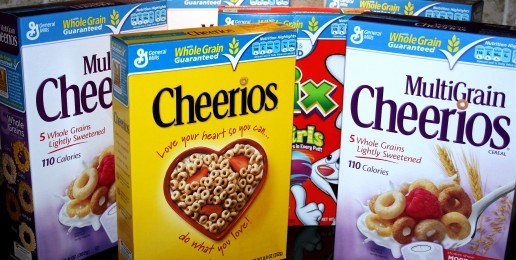 Another large company has recently come out of the corporate closet in support of same-sex marriage. Food giant General Mills has joined a growing list of corporate gay marriage supporters like Target and Starbucks.

Speaking at a Gay Pride event recently, CEO Ken Powell said General Mills opposes an effort to preserve marriage as the union of one man and one woman in Minnesota, where the corporation is headquartered.

Tom Forsythe, vice president of corporate communications, echoed Powell’s thoughts claiming the proposed constitutional amendment banning same-sex marriage would hurt Minnesota’s economy.  “For decades, General Mills has worked to create an inclusive culture for our employees. We believe it is important for Minnesota to be viewed as inclusive and welcoming as well. We oppose the proposed constitutional amendment because we do not believe it is in the best interests of our employees or our state economy,” he said.The National Organization for Marriage (NOM) blasted the General Mills Corporation for the show of support.  “Marriage as the union of one man and one woman is profoundly in the common good, and it is especially important for children,” said Brian Brown, NOM’s president. “General Mills makes billions marketing cereal to parents of young children. It has now effectively declared a war on marriage with its own customers when it tells the country that it is opposed to preserving traditional marriage, which is what the Minnesota Marriage Protection Amendment does.”A national survey conducted by the Alliance Defense Fund (ADF) last year showed that 63 percent of people with children living in their home, “believe marriage should be defined only as a union between one man and one woman.” Just thirty-five percent of people with children at home disagreed with the statement. Overall, the ADF survey found that 62 percent of adults believe marriage is only the union of a man and a woman.

“This will go down as one of the dumbest corporate PR stunts of all time,” said Brian Brown. “It’s ludicrous for a big corporation to intentionally inject themselves into a divisive social issue like gay marriage. It’s particularly dumb for a corporation that makes billions selling cereal to the very people they just opposed.”

The maker of cereals such as Cheerios, Chex and Cinnamon Toast Crunch joins St. Jude Medical as one of two companies based in Minnesota who have taken an anti-amendment position. Most companies have pledged neutrality on the issue.“It is very disappointing that General Mills has decided to play PC politics by pandering to a small but powerful interest group that is bent on redefining marriage, the core institution of society,” said John Helmberger, Chairman of Minnesota for Marriage. “Marriage is more than a commitment between two people who love each other. It was created by God for the care and well-being of the next generation. The amendment is about preserving marriage and making sure that voters always remain in control over the definition of marriage in our state and not activist judges or politicians.”

Planned Parenthood Above the Rules?

ADF: Parents Matter in Abortion Decisions
b
a
x
r