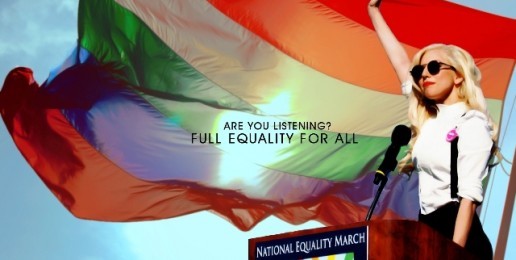 While preaching to the choir at his April 12 Nuclear Security Summit, President Obama revealed his perspective on America’s matchless military might: “Whether we like it or not,” he said, “we (the United States) remain a dominant military superpower.” That the president would even imagine “we” might not “like it,” betrays his fixed membership within that “progressive” camp of self-loathing “or nots.” (Mr. Obama’s anti-Americanism is showing.)

Indeed, if there were ever a question whether Democrats are woefully weak on national defense, that question was cleared up on Tuesday. Taking direction from Lady Gaga (evidently Mr. Obama’s new national defense czar) Senate Majority Leader and chief surrender monkey Harry “the war is lost” Reid cynically attempted, but fortunately failed, to ram through a repeal of Section 654,Title 10, USC – the law prohibiting homosexual conduct within the ranks of the armed services.  Just two Democrats – Sens. Mark Pryor and Blanche Lincolnof Arkansas – voted against repeal.

Often mislabeled “don’t ask, don’t tell,” this law has been in force since 1993, when it was passed with overwhelming bipartisan support. The legislation simply codified the military’s objective finding that “homosexual acts would create an unacceptable risk to the high standards of morale, good order and discipline, and unit cohesion that are the essence of military capability.” That finding remains to this day.

Although the strict policy barring homosexual behavior in the U.S. military has been in effect from our nation’s inception, Congress nonetheless found it necessary to codify the prohibition after President Clintonannounced his intent to homosexualize the armed services. To him, the military was merely a petri dish for San Francisco-style social experimentation.

More recently, Mr. Obama, as did Mr. Clinton before him, announced similar plans to compel military leaders to permit self-described “gays” and lesbians to serve openly: This is in spite of the fact that nearly all top brass, in all branches of the armed services, vehemently oppose the move.

Even Gen. James F. Amos, the president’s recent pick to take command of the U.S. Marine Corps, testified before the Senate just days ago that reaction among Marines has been “predominantly negative.” He understandably fears “the potential disruption to cohesion that may be caused by significant change during a period of extended combat operations.” It stands to reason that in the precise game of war, even a slight disruption in unit cohesion or troop morale can spell the difference between life and death.

But none of this matters to the Obama-Reid-Lady Gaga triumvirate. They’ve somehow concluded, in the face of significant evidence to the contrary, that 234 years of American history, nearly all of our military’s top leaders and the vast majority of boots on the ground simply have it wrong.

Madame Gen. Gaga summed up the trio’s battle plan rather succinctly at a recent homosexualist rally for repeal: “Our new law is called ‘If you don’t like it, go home!'” she observed. Those 12 words are perhaps the most perceptive ever to grace the dirty diva’s foul-mouthed lips.

In fact, according to a 2008 Military Times poll, Gaga’s got it right. When asked the question “If the ‘don’t ask, don’t tell’ policy is overturned and gays are allowed to serve openly, how would you respond?” almost 10 percent of active-duty personnel replied: “I would not re-enlist or extend my service.” Another 14 percent warned: “I would consider not re-enlisting or extending my service.”

Of course, the potential exodus of up to 24 percent of current military personnel from our all-volunteer services would be devastating to national security. But when those holding the reins of government function from an egalitarian, globalist, Euro-socialist worldview, we shouldn’t be surprised that national security takes a backseat to political correctness.

While in the interest of promoting sanctimonious notions of “tolerance” and “diversity,” we dress up our military like Poochie poodle in a pink sweater, Iranian, North Korean and Chinese pit bulls bark at the gate.

While we work to “gay”-down our historically unparalleled fighting force to mirror those of Canada, the Netherlands and Switzerland, our nation’s single-minded enemies ramp up intense combat training and military spending.

Progressives have had their fun, but the grown-ups are pulling into the driveway. Defense-minded conservatives must take charge in November. If they don’t, America’s historic stand as the world’s dominant military superpower may indeed fall.