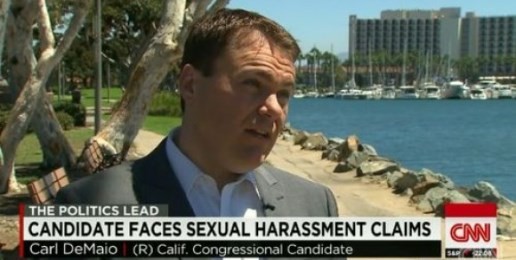 U.S. Republican House Speaker John Boehner (OH), who came under fire from conservatives for resisting the creation of a Benghazi select committee until the scandal got too big to ignore, is under fire from conservatives once again. On Saturday he raised funds for Carl DeMaio, a gay Republican congressional candidate at the center of a scandal to turn the GOP into a gay-friendly political party like the Obama Democrats.

DeMaio, charged with sexual harassment and exhibitionism, is one of the Republican “young guns” getting official Republican money and support. But he has also enjoyed the strong support of Fox News personalities, especially Richard Grenell, a Fox News contributor and homosexual activist who advises his campaign.

The Conservative Review calls DeMaio a “deviant” and wonders whether the National Republican Campaign Committee (NRCC) vetted DeMaio before the Republican Party funneled $1 million into his campaign.

Although House Speaker Boehner is under fire for supporting the controversial candidate, the growing scandal pits two news organizations, Fox and CNN, against each other.

Back in January, Fox News had run a story about DeMaio preparing to “make history” in the congressional race, while Dana Perino, co-host of the channel’s “The Five,” hailed DeMaio for being in a “committed relationship” with another man and the first candidate “to feature his partner in campaign literature.”

“Full disclosure,” said Perino. “I am a former employee of the San Diego City Council, where I worked with Ric Grenell, now again a colleague of mine at Fox News Channel, and who currently consults on the DeMaio campaign.”

Despite this conflict of interest, DeMaio appeared on Fox News with Martha MacCallum and declared, “I don’t think either political party ought to be talking about social issues.”

Yet, his campaign website declares that on social issues:

Boehner’s fundraising for the controversial candidate comes as prominent San Diego Christians have announced they will cast a “tactical vote” against DeMaio and in support of his Democratic opponent, Rep. Scott Peters (D-CA).

The letter from the Christian leaders, issued before the sex scandal broke wide open, says DeMaio not only supports homosexual “marriage,” but abortion rights. He supports “medical marijuana” and is reported to be open to the idea of legalizing marijuana for recreational purposes.

He also accepts the Obama line on so-called climate change, having declared that “human activity has an impact on the climate,” and that “we must continue to invest in research to determine what is happening, why, and what we can do to mitigate it.”

The Christian leaders declared, “DeMaio is an avowed LGBTQ activist (Lesbian, Gay, Bisexual, Transgender, Questioning). The LGBTQ movement believes in a genderless society, where God’s order of male and female is denied. Their goal is much greater than that. It is to impose their views upon us, with the intent of abolishing our rights to freedom of religious conscience, coercing us to affirm homosexual practice and to forever alter the historic, natural definition of marriage.”

Despite the sex scandal charges against DeMaio, Boehner and the National Republican Congressional Committee are still in support of this “new generation Republican” candidate.

However, former Arkansas Governor and Republican pro-family leader Mike Huckabee is threatening to leave the GOP over the issue. “If the Republicans want to lose guys like me—and a whole bunch of still God-fearing Bible-believing people—go ahead and just abdicate on this issue, and while you’re at it, go ahead and say abortion doesn’t matter, either,” he said.

CNN’s coverage of the issue has noted the relationship between DeMaio and Fox News contributor Grenell.

After interviewing Bosnich on camera, CNN said it “repeatedly tried to get detailed answers from DeMaio’s campaign,” but that a conference call “was led by hired consultant Richard Grenell, a former Mitt Romney presidential campaign spokesperson and Fox News contributor. Grenell refused to answer questions and accused CNN of being on a partisan witch hunt.”

Grenell is an official of Capitol Media Partners and an open homosexual who appears frequently on Fox News. His areas of expertise include “crisis communications,” and his website declares, “Capitol Media Partners has a proven track record of working with journalists, editors and executives to mitigate developing stories and shape ongoing news coverage. We have extensive contacts and relationships with a variety of national and international reporters across industries and beats.”

But the crisis has been building for DeMaio and Boehner.

Meanwhile, national pro-family leaders have sent a letter to Boehner and other Republican officials opposing official GOP support for candidates like DeMaio who are openly homosexual or pro-abortion.

The letter, signed by Brian S. Brown, President, National Organization for Marriage; Tony Perkins, President, Family Research Council; and Tom Minnery, President, CitizenLink, said, “The undersigned organizations are writing to inform you that we actively oppose the election of Republican House of Representative candidates Carl DeMaio (CA-52) and Richard Tisei (MA-6) and Oregon U.S. Senate candidate Monica Wehby and will mount a concerted effort to urge voters to refuse to cast ballots for them in the November election.”

Richard Tisei is a homosexual Republican running for the U.S. House from Massachusetts, while Monica Wehby is a GOP Senate candidate from Oregon who has endorsed homosexual marriage.

This decision was reached only after having exhausted all attempts to convince the Republican leadership of the grave error it was making in advancing candidates who do not hold core Republican beliefs and, in fact, are working to actively alienate the Republican base. We believe that Republican candidates should embrace the full spectrum of conservative principles—economic, national security and social issues—that have defined our party since President Reagan led us to a transformative victory. While we acknowledge that a national party must accommodate varying points of view on matters of prudence, we also believe a party must stand for certain core principles that it expects its candidates to defend.

Referring to the National Republican Congressional Committee supporting candidates like DeMaio, Tony Perkins has said it appears that “some of the GOP want to snatch defeat from the jaws of victory” this November.

Sounding optimistic, candidates DeMaio and Tisei have formed a joint fundraising committee called the Equality Leadership Fund, and plan to “build a foundation for other gay Republicans to use in their campaigns for office.”

But that depends on Republicans voting for and electing these candidates.

Pro-family advocate Peter LaBarbera of Americans for Truth says Republican “big shots” have failed to take into account  the number of social conservatives who will “walk away from the GOP or simply not vote,” as result of the party nominating candidates like DeMaio.