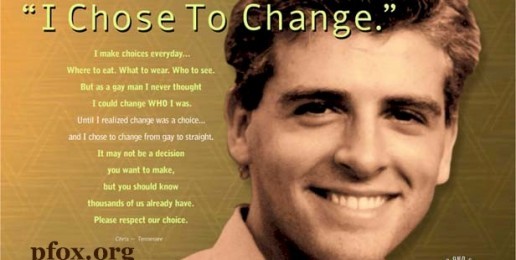 There are scores of organizations across America that help people overcome same-sex attraction disorder and gender identity confusion.  All of them are becoming targets of the far left.  In California, the state legislature actually passed a bill nearly shutting down all such agencies even though clients voluntarily choose their help.

A counseling group in New Jersey, another liberal bastion of tolerance, is being sued by a far-left group called the Southern Poverty Law Center (SPLC).  The SPLC claims that JONAH (Jews Offering New Alternatives for Healing) is involved in consumer fraud because reparative therapy and sexual reorientation counseling is not always successful.  (No counseling of any kind, even the very best, is ever anywhere near 100 percent successful.)

The SPLC is arguing that sexual orientation is fixed at birth and therefore cannot be changed.  But the Freedom of Conscience Defense Fund, which is representing JONAH, has pointed out that the medical community is deeply divided on this issue. They have submitted numerous affidavits from medical professionals providing evidence that change is possible and sexual preference is fluid among those identifying as homosexuals and bisexuals.

One of the affidavits for JONAH should have made big news.  It comes from renowned psychologist, Dr. Nicholas Cummings, who was the past President of the American Psychological Association (APA).  In recent years the APA has become political and very left leaning on social issues and even their own research involving homosexuality. Yet, Cummins affidavit states that he personally treated over 2,000 homosexuals for various conditions, while his staff counseled thousands more.  Cummins affidavit states that he personally knows hundreds of former homosexual who successfully changed their orientation to heterosexual.