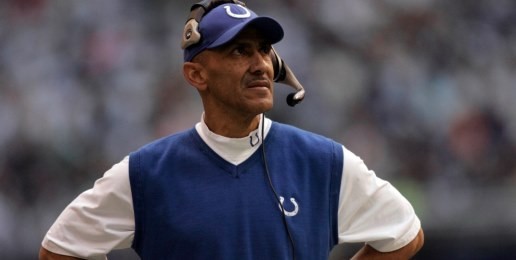 The Chicago Tribune must have an expansive anti-discrimination hiring policy that prohibits discrimination based on foolishness because the paper hires a boatload of foolish writers. The feckless Trib writer ‘o’ the week is sports writer Steve Rosenbloom who penned an embarrassing piece about the admired football coach Tony Dungy.  To be clear, it is Rosenbloom—not Dungy—who should be embarrassed.

Rosenbloom was in high self-righteous dudgeon over what Dungy said when asked if he would have drafted openly homosexual NFL player Michael Sam. Dungy replied, “I wouldn’t have taken him. Not because I don’t believe Michael Sam should have a chance to play, but I wouldn’t want to deal with all of it.”

If Rosenbloom had taken a deep breath and done some research, he would have discovered that the “it” in Dungy’s statement, which has caused such moral indignation among the “tolerant,” did not refer to  Sam’s sexual predilections. Rather, “it” referred to the distraction of the media circus that is following Sam, including a now-postponed reality television program for the Oprah Winfrey Network (OWN).

Yes, Dungy wanted to avoid the very distraction that led Sam himself to postpone his reality show. In a May 16 statement, Sam’s agent Cameron Weiss said that an agreement had been reached with the OWN network to postpone the show in order “to ensure no distractions to his teammates.”

Rosenbloom’s presumptuous and error-ridden editorial beckons for a smidge of rebuttal—that is, a small rebuttal to small-minded, superficial thoughts common to the Left.

First, Rosenbloom compares Michael Sam to convicted dog-fighter Michael Vick, claiming that in Dungy’s world, “a man who wants to love another man is worse than a man who supports killing dogs for sport.”

Such a free-floating, ambiguous, decontextualized rhetorical question is at best meaningless, at worst devious. The equality our Founding Fathers sought to enshrine in both our Declaration of Independence and the Constitution (which “progressives” re-imagine when its original intent doesn’t suit their fancy) had nothing to do with the protean sexual impulses of constitutionally sinful humans. The equality they valued was political equality based on universal, non-behavioral human traits.

No unmarried adult is denied the right to marry. Homosexuals are not demanding the right to marry. They are demanding the unilateral “right” to redefine marriage by jettisoning the most enduring, cross-cultural marital feature. And it is a re-definitional “right,” by the way, that polyamorists, close blood relatives, and “minor-attracted” persons do not enjoy. Being prohibited from unilaterally redefining marriage to suit their desires does not mean homosexuals are prohibited from marrying.

Rosenbloom continues, describing Dungy’s view that marriage is an institution composed of one man and one woman as “sad” and  “unevolved.” Rosenbloom argues that the belief that sexual differentiation is inherent to marriage “downgrades” those who want their homoerotic unions to be recognized legally as marriages. Does Rosenbloom think that the view that marriage is a union of only two people “downgrades” polyamorists?  Does America’s valuation of equality demand that our conceptualization of marriage further evolve to allow the legalization of plural marriages?

And finally, what Leftist anti-marriage, anti-Christ screed would be complete without the inclusion of the old homosexuality=race saw. Rosenbloom asks,  “What if late, great Steelers coach Chuck Noll had not wanted what he thought might be the distraction of hiring a black assistant coach many decades ago?” To reiterate, Dungy did not view Sam’s aberrant sexual feelings as the distraction. Moreover, race (or skin color) per se is not analogous to sexual attraction. Now, racism and homoeroticism do share something in common. Human sin and lousy biblical exegesis resulted in both the cultural embrace of racism and the current cultural embrace of homoerotic identity politics.

The two titles given to Rosenbloom’s editorial aptly convey both Rosenbloom’s ignorance and the ignorance of the “progressive” sexuality dogma that infects so many in the arts, academia, and the mainstream press in America:

Remember these titles next time someone accuses conservatives of being judgmental. Remember too that Christians are commanded to “Judge with righteous judgment.” Righteous judgment—or properly ordered discrimination between right and wrong—is judgment that aligns with biblical truth. All truth is God’s truth, and truth, like God’s nature, does not evolve—not even to accommodate human desire.

It would behoove “progressives” to read a little less from mainstream journalists and a little more from the great American writer Flannery O’Connor who wrote this in a letter to Betty Hester:

But I can never agree with you that…truth, has to satisfy emotionally to be right….It does not satisfy emotionally for the person brought up under many forms of false intellectual discipline….[T]he very notion of God’s existence is not emotionally satisfactory anymore for great numbers of people, which does not mean that God ceases to exist…. The truth does not change according to our ability to stomach it emotionally. A higher paradox confounds emotion as well as reason and there are long periods in the lives of all of us, and of the saints, when the truth as revealed by faith is hideous, emotionally disturbing, downright repulsive. Witness the dark night of the soul in individual saints. Right now the whole world seems to be going through a dark night of the soul.

Tony Dungy’s views on marriage are views shared by countless Catholic, Orthodox, Protestant,  and Jewish scholars working in prestigious colleges, universities, and seminaries today (not to mention throughout history).  These women and men believe that homoerotic activity is immoral, that it effaces the image of God written on human beings, and that it undermines human flourishing. To affirm such activity would constitute a profoundly unloving act. No loving person affirms that which puts at risk the temporal and eternal lives of others.

These scholars are men and women recognized for their academic accomplishments and their civil treatment of others, including those with whom they disagree on homoerotic activity and marriage. How is it possible that “progressives” look at the lives of men and women like Ryan Anderson, Hadley Arkes, Michael Brown, J. Budziszewki, Anthony Esolen, John Finnis, Robert Gagnon, Robert George, Sherif Girgis , Vigen Guroian, David Bentley Hart, Peter Leithart, Russell Moore, Francesca Aran Murphy, David Novak, Michael Novak, John Piper, Alexander Pruss, R. Reno, Elizabeth Scalia, Andrew Wilson, Doug Wilson, and N.T. Wright—scholars all—and claim that they are ignorant, hateful bigots? It defies reason and evidence to suggest that all these scholars and the scores of others who share their views are motivated by ignorance, stupidity, or blind hatred.

But it’s clear that the Left is not motivated by a desire for truth, nor constrained by lack of evidence. Toss in a few cliché shibboleths like “equality” and “homophobia,” and they win the demagogic battle for the hearts of unthinking Americans who love nothing so much as being part of the cool group.