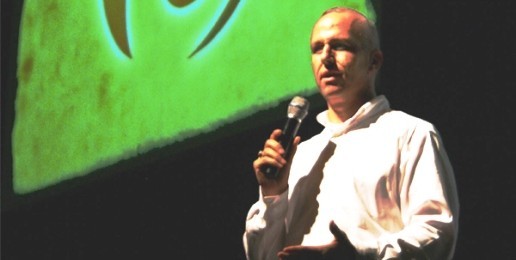 The president of Exodus International, Alan Chambers, has just announced in an extended apology to homosexuals, that he is closing Exodus International, the ministry for those who experience unwanted same-sex attraction, and from its ashes he is creating a new organization titled “Reduce Fear.” The “fear” to which the name refers emanates from theologically orthodox churches that teach the whole counsel of God, including the pesky parts about God’s condemnation of homosexual acts. Apparently, Chambers doesn’t want to scare those who affirm homosexuality with bothersome biblical truths about eternity.

This doesn’t come as a surprise to those who have been closely watching Chambers’ slow abandonment of orthodoxy and his concomitant embrace of the “gay Christian” movement, which promotes the heresy that Christians may affirm a homosexual identity and remain in homosexual relationships.

A year ago in  an interview with The Atlantic, Chambers articulated a tidbit of his exegetically questionable theology:

Atlantic: Does that mean a person living a gay lifestyle won’t go to hell, as long as he or she accepts Jesus Christ as personal savior?

Chambers: My personal belief is that everyone has the opportunity to know Christ, and that while behavior matters, those things don’t interrupt someone’s relationship with Christ. But that’s a touchy issue in the conservative group I run with. (emphasis added)

For those who remain uncertain about Chambers’ deviation from the path of theological soundness, please watch this video of his appearance at a Gay Christian Network event.

Chambers’ transition to heresy has been accompanied by dizzying changes to Exodus’ Board of Directors over the past two years. Here’s a glimpse into that protean board.

The troubling constant on the board is board chairman Rev. Clark Whitten about whose theology Dr. Robert A. Gagnon has warned here  and here.

I’m not suggesting that the Exodus leadership wants believers to experience grace without discipleship, dying to one’s self, and letting Christ live in them. I am saying, though, that they assure self-professed believers (falsely) that the nature of grace is such that believers can have one without the other….

Alan Chambers now calls “evangelical” a “dirty word” that he no longer applies to Exodus or to himself (“Guests in an Ever Changing Culture—Letter from Alan Chambers March 2013”). He complains that Evangelicalism is too “black and white” and he assures us that God is not “black and white,” which presumably means that God’s aim is to shade the light into gray. The story of Christ is now the story of Gray breaking into the darkness.

Evangelicalism, Mr. Chambers complains, gives too much attention to “right and wrong” and requires one to “take a stand” on moral issues. Chambers cries: “Gone are the days of evangelizing through scare tactics, moral legislation, and church discipline.” So instead the Exodus leadership prefers to assure self-professed Christians who engage in unrepentant homosexual practice that they are going to heaven irrespective of whether they bring their life into line with a confession of Christ’s lordship. The Exodus leadership refuses to take a stand against “gay marriage” even as it takes public policy stances on issues that homosexual activists support. And the Exodus leadership categorically rejects church discipline despite the fact that it is commanded by Jesus and Paul.

Earlier this month Alan Chambers even went so far as to insert secretly the e-mail address of Jeremy Hooper, an abrasive homosexual activist, into the middle of a private group email thread containing a number of pro-family leaders (including moi). This led to a number of misrepresentations online by homosexual activist sites and even Salon.com. This deceitful alignment with a person who maligns those who believe in a male-female foundation for marriage is not exactly a model for Christian conduct, certainly not for someone leading what is supposed to be a Christian ministry.

In an Exodus post a couple of weeks ago Leslie Chambers affirmed her husband’s severance of the transformed life from genuine saving faith, saying that while obedience to God is preferred it is not “required”. Neither Leslie nor Alan appears to realize that a necessary byproduct of true faith is a life lived for God.

As Dr. Gagnon mentioned, Chambers’ dissolution of Exodus was accompanied by his serious ethical lapse regarding an email group. A couple of months ago, a well-known and well-respected conservative author sent an email to a group of conservatives. Chambers responded to the entire group, angry that a person or persons in this large group have allegedly used terms in some context that Chambers finds offensive. He never identified the person or persons who used the term/s, nor did he identify the context.

One of the email recipients noticed that Chambers had surreptitiously added homosexual activist Jeremy Hooper, who has a blog titled Good As You (G.A.Y.). When confronted about the stealth addition of Hooper, Alan defensively admitted that he had, indeed, done so in the hope that Hooper would report on the email exchange and that the “good and decent people” on the list would be shamed into publicly exposing and rebuking others whom they may not know for offenses Chambers would not reveal.

I asked Chambers the following questions, which he refused to answer:

No ministry should ever tell those who experience same-sex attraction or any other sin inclination that there’s a human way to eradicate all sinful impulses. If Exodus staff conveyed that unbiblical idea to those to whom they ministered, they erred.

Conversely no Christian should be told that God will not free them from same-sex attraction or that they will never experience heterosexual attraction, for those too are erroneous ideas.

Scripture tells us that God will free us from bondage to sin, but that full sanctification does not come in this life. We are promised that in this life, God will give us the power to resist our sinful impulses, which for most of us persist at least in attenuating strength.

God does not, however, give us permission to affirm our sinful impulses or act upon them. We are to pursue lives of holiness—which will never include homosexual relationships.

Since Exodus has abandoned orthodoxy, it is a good thing that it is shuttering its doors.  Fortunately, a far better ministry exists to fill a desperate need: Restored Hope Network

When we read about prior heresies, they seem like distant historical curiosities, but right now we are eyewitnesses to the birth and growth of a heresy in our lifetime. Let’s hope and pray that it’s soon relegated to the dustbin of heresies.

More on Alan Chambers from Christianity Today
b
a
x
r