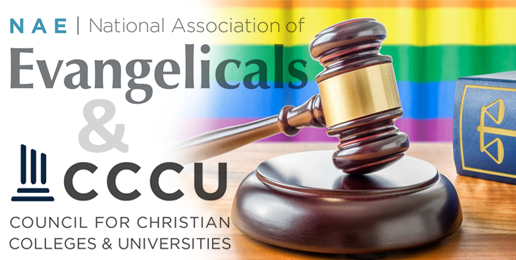 In stunning semi-secretive decisions motivated by fear of religious persecution, the boards of two major evangelical organizations, the National Association of Evangelicals (NAE) and the Council for Christian Colleges and Universities (CCCU), have voted to pass motions that represent an unacceptable compromise with homosexuals and the science-denying “trans” cult. These two influential organizations passed motions that would ask the government to add “sexual orientation” and “gender identity” as protected classes in federal anti-discrimination law in exchange for religious liberty protections that many people know would merely be stepping stones yanked out from under people of faith eventually.

According to World Magazine, in October, the NAE board unanimously passed its motion, titled “Fairness for All” (first discussed in Christianity Today in 2016), which asks “Congress to consider federal legislation consistent with three principles,” the problematic one which says this:

No one should face violence, harassment, or unjust discrimination on the basis of sex, sexual orientation, or gender identity.

Of course, no one should face violence on the basis of any condition. So far, so good. But the rest of this principle is a theological, philosophical, political, and rhetorical mess. To illuminate the mess, here are a few questions for the Christian leaders who passed motions based on it:

1.) While this compromise may—for a short time—protect Christian colleges and universities, how might the religious liberty of ordinary Christians in, for example, wedding-related businesses, be affected if under federal law, homosexuality becomes a protected class?

3.) Would those Christian leaders who voted for these motions have done so if, instead of the euphemisms “sexual orientation” and “gender identity,” in which are embedded false assumptions, the motions had used plain-speaking or even biblical terms? Let’s give the Fairness for All statement above a less-sanitized whirl:

How would that more accurately phrased statement have sat with the Christian leaders?

4.) Unlike other protected classes that are constituted by objective conditions that are in all cases immutable and carry no behavioral implications (e.g., sex and nation of origin), homosexuality, bisexuality, and opposite-sex impersonation are constituted by subjective and often fluid feelings and volitional acts with moral implications. Therefore, what other conditions similarly constituted will eventually be deemed protected classes? Why should homosexuality be included and polyamory or Genetic Sexual Attraction (aka incest) excluded?

To fully grasp the magnitude of the potential effect of these motions requires knowledge of the size of the organizations that passed them. The NAE “is an association of evangelical denominations, organizations, schools, churches and individuals. The association represents more than 45,000 local churches from nearly 40 different denominations and serves a constituency of millions.”

To be clear, we must not assume any of these colleges and universities supported the motion passed by the CCCU board. For example, Dr. Benjamin Merkle, president of New Saint Andrews College, which is a CCCU member, explained that “I’ve registered my opposition to this move, as have several other CCCU presidents.”

While the CCCU and NAE boards capitulate to the Left’s relentless demand to have disordered sexual desires and deviant sexual behavior deemed conditions worthy of special protections, 75 prominent religious leaders oppose capitulation to such demands.

In recent years, there have been efforts to add sexual orientation and gender identity as protected classifications in the law—either legislatively or through executive action. These unnecessary proposals, often referred to as SOGI policies, threaten basic freedoms of religion, conscience, speech, and association; violate privacy rights; and expose citizens to significant legal and financial liability for practicing their beliefs in the public square. In recent years, we have seen in particular how these laws are used by the government in an attempt to compel citizens to sacrifice their deepest convictions on marriage and what it means to be male and female….

SOGI laws empower the government to use the force of law to silence or punish Americans who seek to exercise their God-given liberty to peacefully live and work consistent with their convictions. They also create special preference in law for categories based on morally significant choices that profoundly affect human relations and treat reasonable religious and philosophical beliefs as discriminatory. We therefore believe that proposed SOGI laws, including those narrowly crafted, threaten fundamental freedoms, and any ostensible protections for religious liberty appended to such laws are inherently inadequate and unstable.

SOGI laws in all these forms, at the federal, state, and local levels, should be rejected. We join together in signing this letter because of the serious threat that SOGI laws pose to fundamental freedoms guaranteed to every person.

In a recent interview, John Stonestreet used the recent firing of a Virginia high school French teacher for his refusal to use incorrect pronouns when referring to a “trans”-identifying student to illustrate the potential danger SOGI laws pose to Christians in the work place:

Every version of the Fairness for All proposals that I have seen would not help Peter Vlaming at all. In fact, it would put us on the wrong side of that…. Here you have a government employee working at a public school who serves the public interest that has already been defined by Fairness for All and SOGI legislation as including “sexual orientation” and “gender identity” as a category of human being, and that basically sets Peter Vlaming up for failure.

It’s astonishing that time and again the experts—people like Ryan Anderson, Anthony Esolen, Robert Gagnon, Robert George, and Doug Wilson—who have been writing presciently for years on cultural/political issues related to disordered sexuality are ignored by those who spend far less time thinking and writing about them.

Shirley Mullen who is president of Houghton College and a member of the NAE Board, wrote that “the most viable political strategy is for comprehensive religious freedom protections to be combined with explicit support for basic human rights for members of the LGBT community.” What are the “human rights” of which members of the “LGBT” community are currently deprived? Near as I can tell, they are deprived of no human or civil rights. (Anticipating an objection, I will add that no man has a human or civil right to access women’s private spaces—not even if he pretends to be a woman.)

On his American Conservative blog, Rod Dreher quotes a pseudonymous friend called “Smith” who has been working behind the scenes for years on the Fairness for All compromise with “LGBT” activists. Smith argues that this compromise is necessary because conservatives—who have lost the cultural battle on sexuality—cannot count on either statutory or judicial protections of their free exercise of religion. But Smith revealed something more troubling:

[T]here really is a question of justice within a pluralistic society that conservative Christians have to face. We may sincerely believe that homosexuality is morally wrong, but at what point does the common good require that we agree that gay people have a right to be wrong?

First, since when do conservatives deny that “gay people have a right to be wrong”?

Second, since Smith isn’t really arguing that the common good demands that conservatives agree that gay people have a right to be wrong, what specifically is it he believes the common good demands of conservatives? In a consistently dismissive tone, Smith suggests that conservatives demonstrate an absolute rigidity but fails to identify the specific ways conservatives are being intolerantly inflexible and in so doing harming the public good. He seems to be suggesting that standing firm against SOGI laws—which put at grave risk religious liberty and constitute complicity with both moral and scientific error—is the issue that threatens the common good and on which we must capitulate compromise.

If pluralism is about accommodating deep difference—if conservative Evangelicals are going to ask for accommodation of difference, then they can’t turn around and say in every single case when they are asked to accommodate sexual minorities, ‘No, we will fight to the death.’ That’s not pluralism if all you’re doing is protecting your own rights and saying error has no rights when it comes to you. Pluralism has to be seen by others who disagree with you as fair.

Yes, pluralism is about accommodating differences, but there are differences on which accommodation is impermissible for Christians. I doubt Smith would have made such an ambiguous claim about Christians who rigidly refused to compromise on the nature and intrinsic worth of enslaved blacks or who will not accommodate Planned Parenthood’s views of humans in the womb. The nature, meaning, and value of biological sex, marriage, and children’s rights are other issues on which it is impermissible for Christians to compromise, even if that inflexibility results in persecution.

As you may know, thanks to amazingly generous Illinois Family Institute partners, we have an end-of-year matching challenge of $100,000 to help support our ongoing work to educate and activate Illinois’ Christian community.

Please consider helping us reach this goal!  Your tax-deductible contribution will help us stand strong in 2019!  To make a credit card donation over the phone, please call the IFI office at (708) 781-9328.  You can also send a gift to: