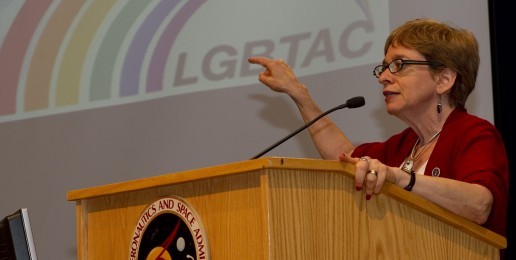 Georgetown University lesbian law professor Chai Feldblum believes that when same-sex is marriage is legalized, which she argues is both necessary and inevitable, conservative people of faith will lose religious rights. This is the same Chai Feldblum who has been nominated to serve on the Equal Employment Opportunity Commission (EEOC).

Feldblum, speaking at a Becket Fund Symposium in December 2005 stated the following:

[L]et us postulate, for the moment, that in some number of years an overwhelming majority of jurisdictions in this country will have changed their laws so that LGBT people will have full equality in society, including access to civil marriage. Or, indeed, let us postulate that the entire country is governed–as a matter of federal statutory and constitutional law–on the basis of full equality for LGBT people….

Assume for the moment that these beliefs ultimately translate into the passage of laws that prohibit discrimination based on sexual orientation and that provide same-sex couples the same societal supports currently available to opposite-sex couples, including access to civil marriage….[G]ranting this justified liberty and equality to gay people will likely put a burden on those religious people who believe acting on one’s same-sex sexual orientation is a sin and who may feel they are aiding and abetting sin if they rent an apartment to a gay couple, allow a gay couple to eat at their restaurant, or provide health benefits to a same-sex spouse….

That is because I believe granting liberty to gay people advances a compelling government interest, that such an interest cannot be adequately advanced if “pockets of resistance” to a societal statement of equality are permitted to flourish, and hence that a law that permits no individual exceptions based on religious beliefs will be the least restrictive means of achieving the goal of liberty for gay people…

Not surprisingly, following her nomination to the EEOC, Feldblum requested that her name be removed from the subversive document she signed in 2006 entitled “Beyond Same-Sex Marriage: A New Strategic Vision for All Our Families and Relationships,” which begins with this troubling statement:

We, the undersigned–lesbian, gay, bisexual, and transgender (LGBT) and allied activists, scholars, educators, writers, artists, lawyers, journalists, and community organizers– seek to offer friends and colleagues everywhere a new vision for securing governmental and private institutional recognition of diverse kinds of partnerships, households, kinship relationships and families. In so doing, we hope to move beyond the narrow confines of marriage politics as they exist in the United States today.

We seek access to a flexible set of economic benefits and options regardless of sexual orientation, race, gender/gender identity, class, or citizenship status.

The “Beyond Marriage” authors seek to have “Committed, loving households in which there is more than one conjugal partner” as well as “Queer couples who decide to jointly create and raise a child with another queer person or couple, in two households” be recognized as families and accorded all the benefits of traditional marriages.

Click HERE to watch a short and important video that exposes the radical nature of Feldblum’s vision for America, American jurisprudence, and religious liberty.

And here are the titles of just three of Feldblum’s scholarly articles:

One of the authors of “Beyond Same-Sex Marriage,” Nancy Polikoff, another lesbian law professor, is pleased as punch that her radical compatriot Feldblum is being considered for the EEOC. Polikoff, who teaches about sexuality and the law at American University, has written voluminously on the issue of families headed by homosexuals. Through her many feckless assertions about families, Polikoff provides clear evidence that intelligence is often wholly disconnected from wisdom.

Here are just a few of her statements from an article entitled “The Deliberate Construction of Families Without Fathers: Is it an Option for Lesbian and Heterosexual Mothers?“

“I start this paper with the premise that it is no tragedy, either on a national scale or in an individual family, for children to be raised without fathers.”

“Contrary to the ideology that simultaneously glorifies fathers and vilifies mothers, I want women to have the option to form families in which their children have no fathers.”

If conservatives continue to self-censor, if we refuse to courageously and publicly counter the relentless, pervasive, deafening cultural messages that affirm homosexual acts as moral, we will lose speech rights, religious liberty, and we will see the destruction of marriage and the natural family.

On Thursday, Dec. 10, 2009, the Senate Committee on Health, Education, Labor, and Pensions approved Feldblum for the EEOC, which sends her nomination to the full Senate for a vote. Please contact both Senators Durbin and Burris to express your vehement opposition to her confirmation.

Take ACTION: Contact Republican leaders in the U.S. Senate to ask them to oppose the nomination of this radical activist.

Make A Tax-Deductible Donation
The work of the Illinois Family Institute is completely underwritten through the voluntary generosity and shared blessings of pro-family citizens. IFI operates on a modest annual budget, which represents the greatest need for your support. We operate with a small, full-time staff, and we hire additional part-time legislative staff to assist us during the General Assembly.

To help our work for Illinois’ families continue, please send your donation today: