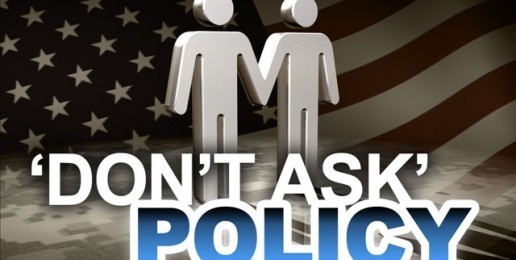 Let your members of Congress know that allowing open homosexuality in the US military is bad public policy.

On January 27th, President Barack Obama delivered his first State of the Union address. Conservative pundits were hoping that the President would signal a move toward a more centrist platform. That hope was not realized.

Instead of a reconciler who could govern from the center, he seemed to insist on radical Leftist ideology. Obama’s pledge to overturn the Military Eligibility Law of 1993 — known as “Don’t Ask, Don’t Tell” — (a policy that governs homosexuals in the military) is desperately irresponsible. It would place the military in the strange position of actively recruiting personnel who intend to violate the Uniform Code of Military Justice (which prohibits certain forms of immoral sexual behavior).

The Washington Times reported on a poll conducted by the Military Officers Association of America in which it found support for the current “Don’t ask, Don’t tell” policy (16 percent) or an even stronger law excluding homosexuals from the military (52 percent). The same combined percentage, 68 percent, expressed the belief that repeal of the 1993 law would have a very negative effect (48 percent) or a moderately negative effect (20 percent) on troop morale and military readiness.

Take ACTION:  Send an email to President Obama and our Illinois U.S. Representatives and U.S. Senators, and ask them to NOT allow open homosexuality in the military.

Please forward this email to all of your friends.

Thank you for taking action.

Mormon Exodus from Scouting Is Good for Boys

What is Wrong with the Southern Poverty Law Center?
b
a
x
r