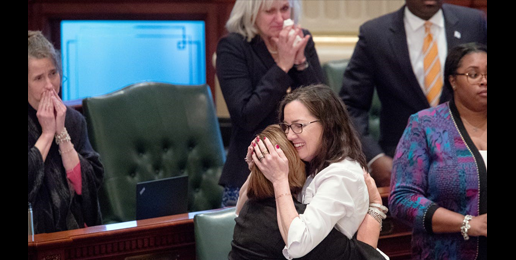 State Rep. Cassidy celebrating the passage of her baby snuff bill.
Does Kelly Cassidy Really Care About the Least of These?
Written By Laurie Higgins   |   03.28.22
PRINT

As I wrote last Friday, Illinois’ worst lawmaker, State Representative Kelly Cassidy (D-Chicago), made scurrilous comments about her colleague Representative Tom Morrison (R-Palatine), refusing even the most basic collegial courtesy of referring to him by name, instead referring to him as “that man.” Cassidy falsely accused Morrison of engaging in hate speech, of “tormenting” minors who identify as the sex they aren’t, of not caring about the deaths of “trans”-identifying persons, and of causing the suicides of gender dysphoric “youth.” She provided no evidence to support her claims.

What had Morrison said to elicit such a vitriolic attack delivered with palpable rage by the morally untethered Cassidy? He made a brief statement delivered in the gracious and measured tone for which Morrison is known in which he said it is unjust for men to compete against women in sports, that it is unjust for adult men to room with girls on school overnight field trips, and that it is unjust for male prisoners to be housed with women. From those statements, the omniscient Cassidy discerned all of his interior feelings.

Morrison also said, “We can and should be kind to individuals who suffer from gender dysphoria,” but anything other than absolute approval for the “gender” beliefs of leftists is deemed hatred by Cassidy.

Cassidy also made a surprising and ironic statement in light of her legislative history. She self-righteously proclaimed,

We are watching around the country as right-wing politicians take aim at trans youth and their families picking on the least of these. … We will embrace our youth. We will protect our youth … because we actually love and care for people as God made them.

You see, in 2019 Cassidy was the chief sponsor of a bill that legalized the slaughter of the unborn for any or no reason throughout the entire nine months of gestation. She doesn’t really care about the least of these. She doesn’t embrace all human beings. She doesn’t seek to protect all “youth.” She doesn’t actually love and care for people as “God made them.”

Morrison in contrast does.

While Cassidy falsely accuses Morrison of not caring about the deaths of “trans”-identifying persons, she actively supports killing humans in the womb. In her unhinged attack on Morrison, Cassidy referred to an “epidemic of murders” committed against cross-sex impersonators. Not surprisingly, Cassidy didn’t flesh out any details about those murders.

Fortunately, Federalist writer Chad Felix Greene, who is homosexual, did flesh out the details in an article titled “I Crunched the Data. The Violence ‘Epidemic’ Against Trans People Is a Myth.” There is no proof that any of the murders of “trans” people were caused by the beliefs of theologically orthodox Christians like Tom Morrison.

According to the Human Rights Campaign, there were about 50 “trans”-identifying persons killed in all of 2021. In contrast, there were about 2,762 humans killed in the womb after 21 weeks of gestation just since Jan. 2022. Doctors who perform fetal surgery on babies at this age administer both analgesics and anesthesia to prevent pain. Abortionists do not.

After reading IFI’s article about her, Cassidy posted this:

It’s Saturday. Almost brunch time. Here’s an idea – join me this morning at Ethiopian Diamond for brunch with a venomous lesbian. The latest screed from the Illinois Family Institute is a ranting piece yelling at me for taking one of my colleagues to task for his continued demeaning and dangerous language about our Trans neighbors. I always know I’m on the right side of things when the IFI is boiling mad. Please join me this morning for my spring fundraiser and help me raise the funds I need to keep pushing back on the vile haters of the IFI.

Cassidy, purported supporter of women, heartily endorses the slaughter of pre-born girls up to birth, the so-called “right” of male athletes to steal awards from women, the “right” of men to use women’s private spaces, the “right” of male prisoners to be housed with women, and the “right” of leftists to indoctrinate other people’s children with leftist their social, moral, and political beliefs on “gender,” sex, and “sexual orientation.” Righteous anger over Cassidy’s lies about those who disagree with her means to Cassidy that she’s on the “right side of things.”

Woe to those who call evil good
and good evil,
who put darkness for light
and light for darkness,
who put bitter for sweet
and sweet for bitter!
(Isaiah 5:20)