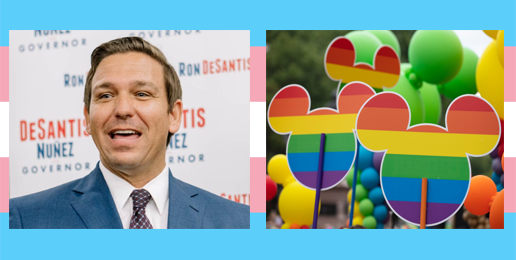 Florida Governor Ron DeSantis is a man for such a time as this. He has a titanium spine, a precisely tuned moral compass, and an intellect that makes him a worthy foe of leftist sophists and dissemblers in the legacy media. His tenacious willingness to challenge destructive ideas through word and deed terrifies and enrages leftists who fear he may one day be president of the United States. Their response to truth and courage is—as usual—lies and epithets.

The latest act of DeSantis to cause conniptions among the brittle leftist masses was his signing a bill into law to protect the parental rights of children, focusing primarily on ages 5-9. This is the summary of the “Parental Rights in Education” law that leftists have deceitfully renamed the “Don’t Say Gay” law:

This new law is intended to stop or prevent leftist activists/re-educators from interfering in the relationship between parents and their children.

In addition to prohibiting classroom discussions of “sexual orientation” and “gender identity” in kindergarten through third grade, the law also prohibits age or developmentally inappropriate discussions of those topics in older grades. This section of the law really enrages the worker bees who want to use their publicly subsidized jobs to gather the minds of other people’s children into the regressive hive mind. Leftists are buzzing cacophonously because in Florida they will no longer be free to colonize the minds of young children.

The Walt Disney Company released a statement condemning the law and declaring war on all Floridians whose elected representatives passed it, saying,

Our goal as a company is for this law to be repealed by the legislature or struck down in the courts, and we remain committed to supporting the national and state organizations working to achieve that.

So, Disney—purveyor of “entertainment” for young children—wants to ensure the indoctrination of young children in government schools.

If huge corporations with bulging bank accounts can repeal duly enacted state laws, are we any longer a government of the people, by the people, and for the people?

Ryan Thoreson writing for the leftist Human Rights Watch bemoans the requirement that in grades 4-12, discussions of “sexual orientation” and “gender identity” must be “age appropriate.” He ironically complains,

[The law] does not specify what would be considered age-appropriate, or who decides.

This complaint is ironic in that leftists continually assert that every piece of deviant and obscene material to which they expose children is “age” and “developmentally appropriate.” And they rarely if ever specify what would be considered age-appropriate and who decides.

If an in-district committee was formed to establish criteria for determining appropriateness of material, parents should ask who specifically formed it and how was it formed? What are the names of the members? Is the committee evenly balanced between “progressive” and conservative members? What are the specific criteria used to determine the appropriateness of material?

Thoreson, like countless other sexual deviance advocates, frets that school staff will no longer be free to keep secrets from parents:

It would significantly limit the ability of counselors and teachers to be a confidential resource for students, including LGBT students who may not feel safe or comfortable asking questions about sexual orientation or gender identity to family members.

It is astonishing that any faculty members or administrators ever arrogated to themselves the right to keep secrets from parents.

Take a look at the contrast between “progressive” and conservative beliefs pertaining to sexuality. You decide which set of beliefs are taught and promoted in public schools and which are banned:

Leftists are not angry that discussions of homoeroticism and gender dysphoria can no longer take place in K-3 classrooms in Florida. Leftists have long supported censorship of conservative views of “sexual orientation” and “gender identity” in the classroom.

Rather, devotees of diversity, equity, and inclusion are angry that their assumptions about “sexual orientation” and “gender identity” can no longer be promoted in early elementary school.

Leftists defend their de facto censorship of conservative views of homoerotic acts and cross-sex identification by claiming that such views are signs of conservative hatred of persons. But the belief that conservatives hate those who identify as “LGBTQ” is a leftist, socially constructed and imposed belief. Most people are fully capable of loving those who hold different beliefs and who live in accordance with those beliefs. Most people do that every day. It is leftists who hate those who hold different beliefs and make life choices consistent with those beliefs.

What conservatives hate is leftists using government schools to impose their beliefs on the children of conservatives. Governor DeSantis and Florida lawmakers hope to stop the scourge of leftists using schools and taxpayer funds to ideologically groom other people’s children.