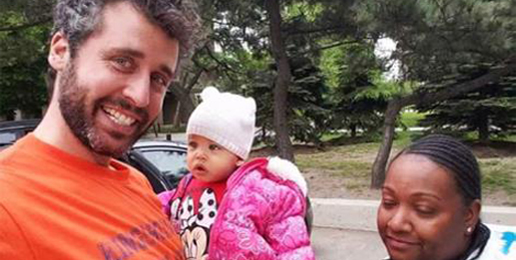 A recent New York Post story  illuminates the tragic consequences of the sexual revolution that separated sex from procreation, sex from marriage, and marriage from children. Children are intentionally and cavalierly separated from their biological parents.

The Post tells the story of peculiar 40-year-old City University New York (CUNY) math professor Ari Nagel who has sired 22 children with 18 women over the past 12 years.

Sometimes when Nagel is “donating” the old-fashioned way to a lesbian who has never had sex with a man, her partner will sit in bed with them holding her partner’s hand for moral support. Loss of virginity can be traumatic, so it’s nice to see that human compassion still exists.

Single women and lesbians all over the country have found Nagel via word-of-mouth, Craigslist, and “Known Donor Registry, a free website for those looking for sperm donors.” They solicit his services because of his “’good looks, personality and high sperm count.” Man-boy Nagel toots his own horn, claiming that his sperm count is “off the charts.”

Nagel’s children range in age from 11 months to 12-years-old and live in New York, New Jersey, Connecticut, Florida, Virginia, Illinois, and Israel. According to the Post, “Some he sees once a week, some he sees once a year, some he’s never met.”

Half of Nagel’s paycheck is garnished as a result of five mothers successfully suing him for child-support. But that’s okay with Daddy Nagel: “‘Financially, it’s bankrupted me, but I’m still very happy with the way things turned out….I got 22 million in the bank — in my kids.’”

Glib New York television news anchors, Sukanya Krishnan and Scott Stanford, interviewed a smirking Nagel on his unseemly hobby, mischaracterizing Nagel’s rejection of normal sperm donation channels as evidence of his desire for a more “rewarding experience.” Waxing sycophantic, Krishnan exults, “He knows most of the children and has connections with them, which I think is great!”

Only fools would think that men who know most of their children but raise none are “great” fathers.

In the world of “progressivism” where virtually every desire transmogrifies into a “right” which society is obligated to accommodate, facilitate, and celebrate, the rights of children are little discussed. Women who are not blessed with marriage or choose not to marry are not entitled to children. And those  who choose to be in intrinsically sterile homoerotic unions—that is, unions that are by design non-procreative—should not be procuring children. Children have intrinsic rights, one of which is to be raised whenever possible by a mother and a father, preferably their own biological parents. This right supersedes the desires of single women and lesbians to bear and raise children.