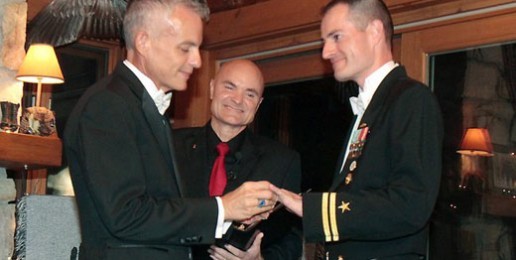 The ineptitude with which political candidates and the rest of us mere mortals answer questions regarding issues related to homosexuality is understandable given the vitriolic attacks with which truthful answers are greeted. But vitriol doesn’t justify ignorance, cowardice, or lack of preparedness.

Michele Bachmann and Rick Santorum, two estimable candidates vying for the Republican nomination, have recently demonstrated the need for not only political candidates but all conservatives to understand more fully and express more articulately topics related to homosexuality.

Several weeks ago in an inquisition by the unnecessarily aggressive David Gregory on Meet the Press, Michele Bachmann performed ably on every question save the questions related to homosexuality. (Click HERE to watch.) Similarly, when questioned recently by Chris Wallace on Fox News Sunday, Rick Santorum demonstrated an uncharacteristic inartfulness in some of his responses concerning homosexuals serving openly in the military. (Click HERE to watch — starting at 7:56) He is to be commended for at least stating the obvious fact that homosexuality is not like race, but so much more needs to be said and could have been said in response to some doors that Wallace’s questions threw open.

Polling shows that a majority of Americans support the repeal of the policy “Don’t Ask, Don’t Tell” (DADT), which may point to the effectiveness of the homosexuality-affirming movement to dominate, often in via ethically dubious ways, the cultural debate. It surely points to the unconscionable silence and cowardice of the church, that is to say, Christians.

According to LifeSiteNews, last week at the Values Voter Summit, Lieutenant General Jerry Boykin, former Deputy Under Secretary for Defense Intelligence, lamented the failure of Christian leaders to publicly oppose the repeal of DADT:

Lieutenant General Jerry Boykin described…the exasperation of pro-family leaders in Washington who found themselves abandoned by church leaders unwilling to make a stand for the “Don’t Ask, Don’t Tell” policy. Boykin, who spent the majority of his career in the Special Forces, was mission commander of the battle portrayed in the Hollywood movie “Black Hawk Down,” and accepted the surrender of Panama military dictator Manuel Noriega in 1989.

According to Boykin, “nobody in this country fought a greater fight” against normalizing homosexuality in the military than Family Research Council President Tony Perkins, himself a former Marine who joined forces with senator and fellow veteran John McCain.

“The answer was, they were silent. The church was silent.” [Emphasis added]

The disturbing polling data may also reveal the public’s failure to understand the role of major cultural institutions in shaping public opinion. In other words, although the military’s primary purpose is to defend and protect America, it also plays a role in promoting and sustaining particular beliefs and values.

Do Americans ever ask themselves why homosexuals are hell bent on talking about their homosexuality while serving in the military? Perhaps they desperately want to share the hopes, dreams, and weekend plans they and their homosexual partners share. But there are other likely reasons. Homosexual activists are determined to eradicate public disapproval of and opposition to homosexuality. And the means they use to eradicate such disapproval and opposition is by capturing the institutions that symbolically and actually espouse, promote, and sustain moral beliefs: churches, synagogues, marriage, public education, legislatures, courts, corporate America, mainstream press, Hollywood, and, finally, the institution most closely associated with male strength, the military.

Homosexual activists may couch their argument in the rhetoric of integrity, but their ultimate goal is not “honesty.” Their ultimate goal is the annihilation of moral opposition to homosexuality, which is still embedded in the policy and ethos of our military. Transforming the beliefs of young men and women through explicit indoctrination (i.e., diversity and sensitivity training) and through non-rational, emotional associative experiences will then affect the beliefs of the general population.

If a politician or anyone else takes a position on homosexuals serving openly in the military (or the legalization of same-sex marriage, or adoption by same-sex couples), they should learn how to defend their position.

Here’s my imaginary Q & A between an inquisitor and a conservative candidate running for political office, based on the questions Wallace asked Santorum:

CANDIDATE:Actually, it is actually, the Uniform Code of Military Justice (UCMJ) that says “There is no constitutional right to serve in the armed forces,” and that “Military life is fundamentally different from civilian life in that the military society is characterized by its own laws, rules, customs, and traditions, including numerous restrictions on personal behavior, that would not be acceptable in civilian society.”Still today, the UCMJ also states this:

The government has every right to establish requirements for membership in an institution like the military (or marriage) that has a particular character and serves particular purposes.

Civil rights are rights that cannot be denied based on non-behavioral, morally neutral conditions. The belief that volitional homosexual acts are moral acts is not an objective fact. It is a radical, a-historical, arguable moral belief.

You state that heterosexuals have served for years with no problem, overlooking two salient points: First, heterosexual men in the military do not sleep, shower, and toilet with the group of people to whom they are sexually attracted. Second, according to a recent report from the Guttmacher Institute female active-duty military personnel experienced twice the rate of unintended pregnancy as compared to the civilian population.

Your question also points to the problems inherent in the politically contrived term “sexual orientation,” which suggests that homosexuality and heterosexuality are equivalent, analogous, or flip sides of the same coin. They’re not. That is the non-factual proposition that homosexuals are promulgating. It is a subversive proposition that no one is obligated to accept as true, and I don’t.

And since homosexuality is principally constituted by volitional acts, society through its policies and institutions have every right to conclude it’s not moral conduct.

INQUISITOR:Do you think that gay soldiers are going to go after their male counterparts in the barracks?

CANDIDATE: If the question is, do I believe that men who state that they are sexually and romantically attracted to other men might be sexually aroused by and romantically attracted to other men with whom they shower and perform other intimate activities, the answer is “Yes.”
Do I think every homosexual soldier will “go after” fellow soldiers. No. But do I think it’s more likely that a homosexual soldier would pursue a fellow soldier than would a heterosexual soldier, the answer is “Yes.”

INQUISITOR:You have said that we shouldn’t inject social policy into the military. Their job is to fight and defend. They’re not a social experiment. I want read a quote to you:

The Army is not a sociological laboratory. Experimenting with Army policy, especially in time of war would pose a danger to efficiency, disciple and moral and would result in ultimate defeat.

CANDIDATE: Sound bite responses are woefully inadequate for complex, contentious issues. I should have been more precise. The military should not be allowed to be exploited and disrupted by homosexual activists to serve their moral and political goals. They are pursuing every major cultural institution to compel society to accept their false belief that homosexuality is by nature analogous to race and morally equivalent to heterosexuality.

The integration of the military was necessary in order to correct the false belief that black men and white men are by nature different. Correcting that false and destructive belief, though difficult as all cultural change is, was essential.

Furthermore, this radical change in policy will usher in a whole slew of other problems, including threats to religious liberty.Here are just a few of the questions Chuck Donovan, Senior Research Fellow at the Heritage Foundation’s DeVos Center for Religion and Civil Society, asks:

1. What would be the impact of a full repeal on particular operational issues (e.g., fraternization, submarine service, field deployment, special forces, etc.)?

2. Some jurisdictions now license homosexual unions either as marriages, domestic partnerships, or civil unions. If Congress’s policy on homosexuals serving openly in the military is changed, and military personnel enter into officially licensed same-sex unions under state law, what would be the impact on military family policy with respect to benefits related to housing, insurance, and other compensation contingent on spousal or family status?

3. How would changing Congress’s military eligibility law affect other federal laws, including the Defense of Marriage Act (DOMA), which defines marriage as the union of husband and wife? Would a change to the current law make the U.S. military exempt from the application of DOMA? If Congress fails to make its intentions clear, could a later court interpret a change to the current ban on open homosexuality as an implicit repeal of DOMA? How would repealing the statutory ban on open homosexuality in the military affect constitutional litigation challenging the traditional definition of marriage at the state and federal levels?

4. What would be the impact on the personal moral beliefs and religious expression of other service members? Will the utterance of a belief that homosexual conduct is morally wrong be punishable in any manner as an expression of discrimination or intent to discriminate?

5. What would be the impact on service chaplains and counselors who may have specific denominational or personal views on the illicitness of same-sex conduct and same-sex relationships? Could they face punitive, administrative or remedial measures (e.g., sensitivity training) that impact their ability to perform their professional roles or infringe on their right to hold and express certain moral or religious views?

6. If military personnel express disagreement with changes to policy approving of homosexuality, how will that affect their careers?

7. Will homosexuality be considered a protected class for promotion or advancement purposes? Will the new law require that promotion boards include precept language requiring the promotion of homosexuals?

INQUISITOR: It is a fact that biology determines one’s sexuality, and it shouldn’t prevent someone from defending their country.

CANDIDATE: There is no proof whatsoever that homosexual impulses are biologically determined. But more important, the desire to serve and defend one’s country must never supersede the needs of the institution charged with that task: the military.

Some argue that the wishes of those who desire to serve their country as openly homosexual men and women should take precedence over the wishes of those who don’t want to serve with openly homosexual men and women. The argument is usually presented as homosexuals are acting unselfishly in their effort to be “out” in the military, while those who oppose serving with them are putting their own needs above the needs of the country. But how is it more selfish to say “I don’t want to serve in the military if I have to shower and toilet with men who tell me they are attracted to men” than it is to say “I don’t want to serve my country unless I can talk openly about my homosexual proclivities”?Homosexual activists try to elevate their desire to share their homosexual proclivities by couching it in ennobling rhetoric as in, “The government is forcing me to live a lie. I can’t live with integrity unless I’m free to express who I am.” Under DADT, no one was asked to tell a lie, because no one was asked.

Moreover, acting on homosexual impulses is the epitome of living without integrity, in both senses of the word. Volitional homosexual acts are degrading and constitute a rejection of the truth that men as sexual beings are complete. As Professor Robert Gagnonstates so eloquently:

Maybe this interview is not only imaginary but quixotic. Oh, well, a conservative girl can dream…