An ugly cultural truth has been confirmed through the Chick-fil-A mess. Yes, some glimmers of light momentarily pierced the darkness as we saw most of the country’s liberal columnists and pundits condemn Boston Mayor Thomas Menino, Chicago Mayor Rahm Emanuel, Chicago Alderman Joe Moreno, and now Philadelphia Councilman Jim Kenney for their anti-liberty pontifications.

I say “glimmers” of light because these same pundits also feverishly assured the public that while they defend the First Amendment, they condemn Dan Cathy’s views, lest anyone think they’re ignorant, provincial, un-evolved, un-hip, hateful chuckleheads.

I say “momentarily” because I have no confidence that a decade from now our liberal pundits and columnists will be such vociferous defenders of speech rights and religious liberty when it comes to homosexuality. We need only look at Canada to see our future.

Religious discrimination directed at any religion is wrong, offensive, and scary, but what Americans should have learned through recent events is that in America, there’s really only one faith tradition against which our cultural elites pride themselves in discriminating: theologically orthodox Christianity. (Many also rather enjoy mocking orthodox Christians).

A number of stories have emerged that reveal that Menino and Emanuel are far more generous to and tolerant of those who hold the same marriage views as Dan Cathy but follow religious traditions that aren’t as politically easy to persecute.

Boston radio host Michael Graham explains that “Mayor Menino ‘sold’ $2 million worth of city property to the [Islamic Society of Boston’s mosque] for $175,000, despite their well-documented links to Muslim extremism. The mosque teaches a form of Islam that condemns homosexuals to death.”

Rahm Emanuel proclaimed “‘Chick-fil-A’s values are not Chicago values. They’re not respectful of our residents, our neighbors and our family members. And if you’re gonna be part of the Chicago community, you should reflect Chicago values.'” That strikes many as a peculiar comment in light of the fact that until a few months ago the president whom Emanuel served opposed same-sex marriage and said so explicitly during his first presidential campaign.

It’s also peculiar because Emanuel apparently feels no moral queasiness about the Nation of Islam reopening its restaurant Salaam in Chicago even though Nation of Islam leader Louis Farrakhan said this about same-sex marriage:

Sin is sin….[Obama’s] the first president that sanctioned what the Scriptures forbid. Now why is it all you politicians take your oath of office on the Bible? If the Book is no good, what the h*ll are you using it for?

Philadelphia Councilman Kenney is a Jimmy-come-lately to the freedom fray and apparently hasn’t noticed that even most “progressives” are troubled by the implications of government efforts to penalize someone for exercising his First Amendment rights.  In his effort to promote tolerance in “the city of Brotherly Love and Sisterly Affection,” Kenney wrote this to Dan Cathy (you can’t make this stuff up): “So please—take a hike and take your intolerance with you.”

The notion that the Constitution guarantees the right of men to marry men and women to marry women is sufficiently bizarre to cause some serious grave-turning among our Founding Fathers. So too would be the notion that opposing “same-sex marriage” could get you in a financial or legal sticky-wicket. This is not progress. Our collective cultural understanding of church-state relations, marriage, and sexuality is devolving from sense to pernicious non-sense.

Please Christians, get educated and speak up boldly while you’ve got the chance. If not for yourselves, do it for your children and grandchildren. 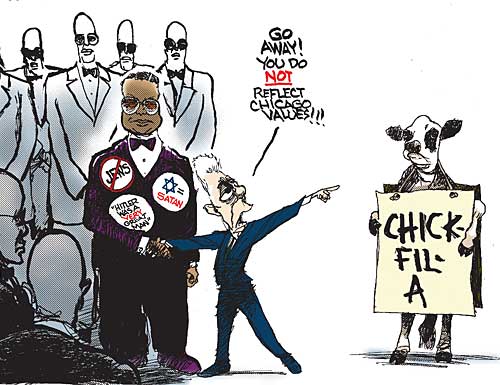 Take ACTION:  If you haven’t yet taken action, please click HERE to let Alderman Joe Moreno know that his actions constitute an intolerant affront to many Illinoisans, threaten religious liberty and speech rights, and demonstrate a profound lack of respect for diversity.  Please be respectful in your comments.

More ACTION:  Pro-family groups across the country are calling for a Chick-fil-A Appreciation Day on Wednesday, August 1st.  IFI would like to encourage you to patronize a local restaurant, if you are able. For a list of Chick-fil-A locations in the state of Illinois, click HERE.