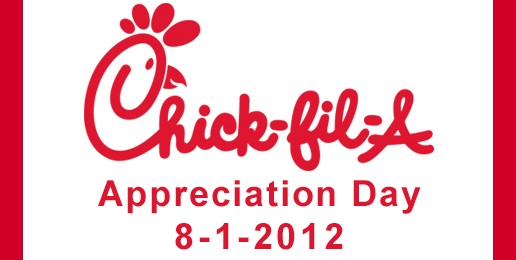 When it comes to supporting God’s design for marriage, Illinois Family Institute isn’t “chicken,” and neither is Chick-fil-A president Dan Cathy.  Christian-owned Chick-fil-A is under attack because Mr. Cathy has publicly affirmed his belief in the biblical definition of marriage.

As a result, homosexual groups have launched un-relenting and vicious public attacks against Chick-fil-A. Here in Illinois, Equality Illinois, a pro-LGBT activist group, is calling for a “Kiss-In” this Friday, August 3rd.  According to news reports, Equality Illinois says, “LGBT supporters will show their disdain for Chick-Fil-A’s policies with public displays of affection in front of their restaurants.”  And in the process they will once again be demonstrating just how intolerant, insensitive and disrespectful the Left is in pushing its “anything goes” agenda.

Chick-fil-A Appreciation Day is being promoted by Gov. Mike Huckabee, Senator Rick Santorum, Gov. Sarah Palin, American Family Association, Family Research Council, WallBuilders and Illinois Family Institute.  This is a great way of showing our support for a company whose owners believe in marriage as one man and one woman.

IFI encourages you to patronize a local Chick-fil-A restaurant on August 1st,  if you are able.  If you cannot make it this Wednesday, please visit one sometime this week. For a list of Chick-fil-A locations in the state of Illinois, click HERE.

And when you do, please take a moment to thank the staff and management by letting them know you appreciate the company’s Christian values.