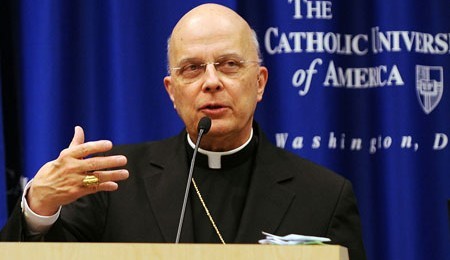 With all due respect to Cardinal Francis George, I think his apology is misguided and his reasoning troubling:

During a recent TV interview, speaking about this year’s Gay Pride Parade, I used an analogy that is inflammatory.

I am personally distressed that what I said has been taken to mean that I believe all gays and lesbians*are like members of the Klan. I do not believe that; it is obviously not true. Many people have friends and family members who are gay or lesbian, as have I. We love them; they are part of our lives, part of who we are. I am deeply sorry for the hurt that my remarks have brought to the hearts of gays and lesbians and their families.

I can only say that my remarks were motivated by fear for the Church’s liberty. This is a larger topic that cannot be explored in this expression of personal sorrow and sympathy for those who were wounded by what I said.

His primary justification or at least his public justification was that his analogy was hurtful. I wonder if he would publicly state that homosexual acts are “abominable.” Surely, that would be “hurtful” to those who identify as homosexual, and yet that’s how Scripture characterizes them.

The notion that the presence of hurt feelings means that Cardinal George has done something wrong suggests that the ethical legitimacy of public speech is determined by the subjective response of hearers. But consistently applied, that principle would prohibit all expressions of moral propositions.

Anyone who bothered to read his original comments knows that he did not suggest that all homosexuals are “like members of the Klan.” His comments were about “some” homosexual activists. Moreover he expressed his “hope” that the “gay pride” parade would not “morph” into something like the marches the KKK led against the Catholic Church.

I understand why non-Christians have lost sight of how profoundly wrong homosexual acts are, but when followers of Christ have so little spiritual discernment and so much theological ignorance, society is in deep trouble.

Homosexual activists as an organized public movement do not preach violence or engage in violence, but many express hatred. I have been on the receiving end of multiple hair-curling epithets and death wishes.

In addition, the effort to teach little children in our government schools, subsidized with public dollars, that this sin is good is an unconscionably evil act. Homosexuality is so serious a sin that it puts people at risk of eternal separation from a Holy God, and we’re teaching children in school that it’s morally equivalent to heterosexuality. Most of us are so desensitized or inured to the wickedness (if I may use this somewhat archaic term) of homosexual acts and so spiritually obtuse that the evil of teaching children that wrong is right doesn’t even register on our moral barometer.

Moreover, homosexual activists seek to prohibit parents from opting their children out of such teaching. I can’t think of a group that seeks such an egregious and arrogant usurpation of parental rights.

I agree that the analogy was inflammatory and that the point that homosexual activism is becoming increasingly hateful, aggressive, and tyrannical could have been made without it. Cardinal George could have said that some homosexual activists discriminate based on religion; that some activists hate people who hold orthodox theological beliefs on homosexuality; that some employ hateful and obscene rhetoric; that some march in the streets violating public decency laws and promoting evil ideas; that some seek to diminish other people’s fundamental constitutionally protected liberties; and that some seek to use public schools to promulgate their philosophical, moral, and political beliefs about homosexuality. All of this may be hurtful to hear, but it is not unethical to say.

What I wish Cardinal George had said was that homosexual acts are soul-destroying acts that are “detestable” in God’s eyes and that the parade is a tragic, offensive event that shouldn’t take place on any day in any neighborhood. It is not an act of love to affirm or appear to affirm that which God condemns.

*Cardinal George should not use the terms “gay” and “lesbian.” Those terms do not merely denote same-sex attraction and volitional acts. They connote biological determinism, immutability, and an inherent morality. What other groups would Cardinal George choose to identify by their disordered inclinations and freely chosen sinful acts? Rhetoric matters.