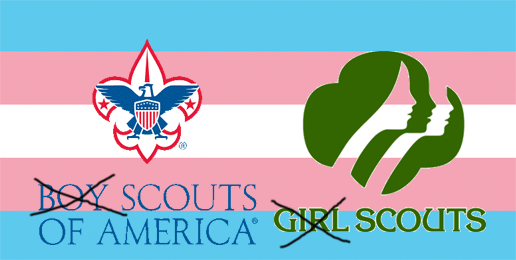 The Girl Scouts USA (GSUSA) has got a collective case of the vapors over their discovery of a “covert campaign to recruit girls into programs run by the Boy Scouts.”  How dare the Boy Scouts of America (BSA) even consider allowing girls in the BSA!

Does someone have a towel to wipe up the irony that drips from the brows of the conspiracy theorists who man the helm of the Left-listing GSUSA ship?

A spokesperson for the GSUSA told BuzzFeed that the sexual integration of the BSA is a “‘potentially dangerous and bad idea,’…citing research supporting ‘single gender programming’ which says that girls learn best in an all-girls environment when it comes to scouting.”

I suspect the spokesperson meant to say “single-sex” programming, rather than “single-gender” programming, but he/she/ze/they should be forgiven for his/her/zir/their error. It’s hard to keep up with the shifting definitional sands upon which the Leftist sexuality/gender ideology is built.

If the sexual integration of scouting is at minimum a “bad idea” and “potentially dangerous,”—as the GSUSA claims—why the heck has the GSUSA been admitting boys for six years?

Now that both clubs admit opposite-sex children, what possible justification could the GSUSA offer for opposing a decision by the BSA to admit all girls who want to join? If a club for boys allows girls to be members based on nothing more than the desire of those girls to be boys, why not admit other girls based solely on their desire to be boy scouts? What if these girls internally identify as boy scouts? What if they need to be boy scouts to live authentic lives?

Isn’t the GSUSA arguing for discrimination based on sex when it seeks to prevent objectively female children from joining the Boy Scouts?

Either way, it seems that the GSUSA has been hoist by its own petard. Its perverse sexuality ideology applied consistently permits no sex-segregation anywhere for anyone.

Either objective, immutable, biological sex as evidenced in anatomy is profoundly meaningful and should be recognized and respected—or it isn’t.

The “trans” cult, borrowing tactics from homosexual activists, exploit the historical plight of blacks, repeatedly claiming that single-sex private spaces constitute the same kind of invidious discrimination that blacks experienced during the slave era and era of Jim Crow laws.

Of course, such a claim is absurd and invidious.

While there are no ontological differences between people of different skin colors, there are significant differences between males and females, which even homosexuals tacitly acknowledge when they say they are romantically and erotically attracted to only persons of their same sex. So, too does research that demonstrates that single-sex educational contexts serve the needs of boys and girls best.

When I worked at Deerfield High School, even “progressive” teachers inadvertently acknowledged these differences when they would good-naturedly gripe about having classes heavily weighted with students of one particular sex. Take a stab at which students—male or female—are generally more disruptive and harder to manage en masse in a classroom context (PE excluded).

The differences between males and females include–but are not limited to–anatomical differences, and it is anatomical differences that account for natural and good feelings of modesty and the desire for privacy. If anatomy has no meaning relative to modesty and privacy and if segregating humans based on objective, biological sex constitutes unjust discrimination, there should be no sex-segregated spaces anywhere for anyone, and that’s exactly what “trans”-cultists seek.

The BSA claims it will continue to allow girls to join only certain of its programs but not all. Remember when it claimed it would not change its membership policy on homosexuality and on girls who wish they were boys? Remember when it took seriously its oath to honor God? Does anyone really believe the Boy Scout leadership will stand firm in the face of pressure from the National Organization for Women to allow girls to join all BSA programs and the Change.org petition started by a young “activist” who is determined to be an Eagle Scout? What reason could the BSA have for allowing girls who wish they were boys to join the Eagle Scouts but not this young activist?

It’s only a matter of time.

If conservatives don’t speak up as loudly and persistently in defense of the meaning and value of sexual differentiation as Leftists do in defense of their cultic, science-denying “trans” ideology, we will witness one of the most profound cultural revolutions the world has ever seen: We will see the eradication of all public recognition of sex differences everywhere for everyone. This will not result in a handful of gender-dysphoric persons accessing opposite-sex private spaces—which is pernicious enough.

We’re just one step closer to the phantasmagorical “progressive” world that pretends that sex differences are meaningless.

I wonder, which scouting club should “gender-non-binary” and “gender fluid” kids join?

If you appreciate the work and ministry of IFI, please consider a tax-deductible donation to sustain our endeavors.

Watching a Bully Get Smacked
b
a
x
r