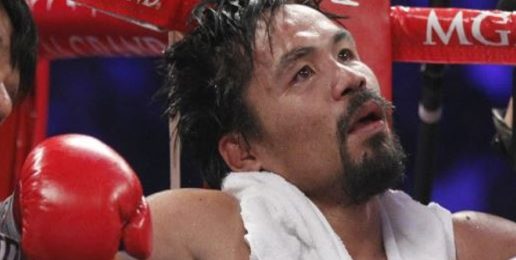 Boxer Manny Pacquiao has rightly apologized to “LGBTQP” activists for saying, “Do you see animals mating with the same sex? Animals are better because they can distinguish male from female. If men mate with men and women mate with women, they are worse than animals.”

Homosexual Hollywood pontificator Perez Hilton responded, “There’s absolutely no call to demonize and denigrate gay people by comparing them to animals.” He is not alone in his criticism of Pacquiao.

Both Pacquiao and homosexual activists err.

Although God detests homoerotic activity, which mars the image of God imprinted on man, God does not think of humans who engage in it as subhuman. Rather, he views them as he does all  humans. He views them as fallen people in need of redemption.

“Yet you have made him a little lower than the heavenly beings
and crowned him with glory and honor.”
~Psalm 8:5

“For all have sinned and fall short of the Glory of God.”
~Romans 3:23

“And such were some of you. But you were washed,
you were sanctified, you were justified in the name of
the Lord Jesus Christ and by the Spirit of our God.”
~1 Corinthians 6:11