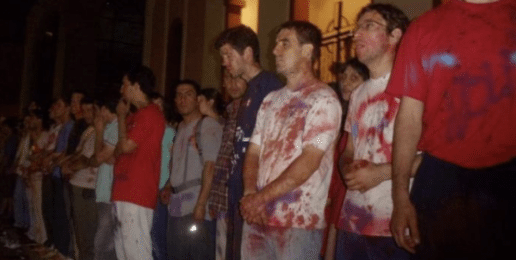 The raw footage is disturbing to the extreme (warning: viewer discretion advised for nudity, lesbian lewdness and violence. A censored version is available here.)

Both the video and the story have since gone viral. WorldNetDaily.com (WND) summarizes the attacks as follows: “Chanting, ‘Get your rosaries out of our ovaries,’ a mob of pro-abortion feminists – many of whom were topless with Nazi swastikas on their chests and foreheads – attacked and sexually molested a group of Roman Catholic men who were praying as they stood outside a cathedral in Argentina to protect it from threats of vandalism.”

Indeed, it’s hard to watch the footage without discerning the palpably dark spirit that possesses many of the estimated 17,000 lesbian, pro-abortion and feminist assailants (but I repeat myself).

Thousands of painted, topless pagans prancing a ring around the pope burned in effigy – for the chief purpose of celebrating a “right” to sacrifice, alive, their own children to goddess abortion – is eerily redolent of ancient Baal worshipers dancing about the inferno and live-roasting, in burnt offering to Moloch, their own children.

For liberals, although the means may change, the ends remain the same.

Still, equally disturbing are a number of comments posted about the incident on at least one award-winning “gay”-activist blog. Ironically, the site, “JoeMyGod,” a serial Christian-defaming cyber-rag, won the award for “Outstanding Blog” in 2011 at the Gay and Lesbian Alliance Against Defamation (GLAAD) Media Awards.

While Joe Jervis – the blog’s militant atheist and “gay” sadomasochist founder – refused to denounce the Argentinian “hate crimes” outright, he at least begrudgingly admitted: “I really can’t see how this advances the cause of abortion rights.”

Even so, Jervis, whose blog has a long history of anti-Christian extremism and violence-charged rhetoric, nonetheless permitted several of his regular posters to not only condone the feminist attacks, but to illegally call for a steep escalation in anti-Christian violence in general (up to and including church bombings, and both the castration and even murder of Christians in the U.S.).

(Update: Jervis has now scrubbed his blog of the post. Screenshots have been taken.)

Poster “mike moore” kicked off the bloodlust: “BRAVA! I wish this happened all the time, particularly here is the U.S. … It’s LONG past time for women to violently react to [being] … denied birth control and then forced to carry a never-wanted child to term.”

“Jeff Chang” offered specific suggestions as to what such violence might look like: “How about destroying the oppresive regims (sic) of the church. To that end would you support firebombing a church? How about removing the clergy (sic) from power? Perhaps a ultra radical (sic) hit squad can use lead pipes and beat the clergy to death. How about just creating FEAR for all male Catholics? A bomb during there (sic) planning meeting would work, do you support that?”

Chang then answered his own questions: “As far as I’m concerned, those quasi-religious, hypocritical bastards should have been castrated on the steps of the cathedral they so pompously took it upon themselves to ‘protect’ – talk about your bulls–t grand-stand plays. That’s right. We should get rid of ALL of them in one fell swoop. I say that we firebomb the next planning meeting.”

“Hands off my uteris!!” agreed: “They should have burned their f–-ing church to the ground!”

So did “Rolf”: “They were lucky they didn’t start castrating them.”

Poster “Seamus Ruah” justified the violence and sexual assault, comparing it to the similarly violent Stonewall Riots of 1969. Stonewall is largely credited for launching today’s increasingly aggressive “gay rights” movement: “When you push a segment of the population too far,” wrote Ruah, “they have a tendency to fight back. /Stonewall.”

In the aforementioned WND report, David Kupelian recalled a similar “1989 attack on New York City’s famed St. Patrick’s Cathedral in which hundreds of ‘gay’ activists stormed the church and terrorized its parishioners during Mass.”

JoeMyGod’s “BudClark” recalls it too: “I HAD a problem with Act Up’s ‘Die-In’ in the middle of High Mass at St. Patrick’s Cathedral in NYC, back in the day,” he wrote. “I DON’T, anymore. The Catholic HIERARCHY deserve (sic) anything and everything they have coming to them, including JAIL.”

Poster “Vel” had a suggestion for Christians and conservatives: “I hope the right wingers come here and take note of these comments. … Assaulting and humiliating people and interfering with their nonviolent expression is OK if done for the right political cause. So the right wingers should note all of this. …”

Rather than lamenting the anti-Christian violence itself, poster “zhera” instead worried: “My only problem with this video is that the Catholics are now able to use it as proof for how they are victims.”

Proof indeed, zhera. And with the burgeoning success of radical “LGBT” and pro-abortion legislation worldwide – especially in countries like Argentina and the good ‘ol USA – we can expect a rapid increase in similar such “proofs” of systemic anti-Christian persecution both at home and abroad.

In its story, LifeSite reported that “some of the women chanted a song, with the lyrics: ‘To the Roman Catholic Apostolic Church, who wants to get between our sheets, we say that we want to be whores, travesties and lesbians. Legal abortion in every hospital.’”

Nice. There you have it: The heart of “gay rights” activism, left-wing feminism and “pro-choice” savagery distilled in one angry rant.

“During the attack some men were visibly weeping,” continued LifeSite. “None of them retaliated against the abuses heaped on them.”

Indeed, to borrow from Madonna, it seems Argentina has much to cry for.

And so does America.

But as for “JoeMyGod,” the question is this: Will GLADD now publicly disavow Joe Jervis for allowing (and perhaps tacitly condoning) such violent (and very likely illegal) rhetoric? Will this self-styled “anti-defamation” group rescind its “Outstanding Blog” award?

Even still, a bigger question remains: Will federal authorities investigate these threats? If it were Christians threatening “gays,” Eric Holder himself would kick-in the door with MSNBC in tow. Every newspaper in America would give it above-the-fold coverage.

And that just doesn’t fit the false “gay victimhood” narrative.