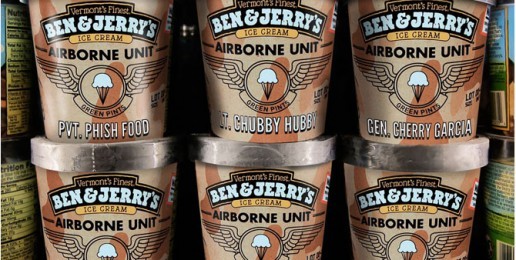 Ben and Jerry’s Hubby Hubby Same-gender marriage is now legal in The Green Mountain State, and Ben & Jerry’s has announced that it will temporarily change its “Chubby Hubby” ice cream to “Hubby Hubby” in honor of homosexual “marriage.” Peter LaBarbera of Americans for Truth about Homosexuality tells OneNewsNow that companies like Ben & Jerry’s neglect to talk about the dangers of the lifestyle.

The public can react by not buying the ice cream products, LaBarbera suggests — but adds that Ben & Jerry’s is probably impervious to conservative criticism at this point.

“The left is really making a fool of itself when it comes to homosexuality. They talk about transparency, but they don’t want to tell anybody about the health risks of homosexual behavior,” he points out. “They claim to follow God and to be Christian, and yet they celebrate all the things that God opposes…abortion, homosexuality. This is just par for the course.”

Unmasking The Human Rights Campaign: The Enemy Masquerading as an Angel of Light
b
a
x
r