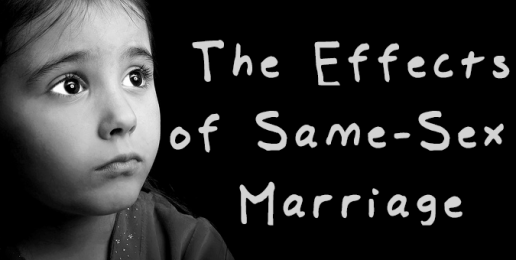 In response to the passage of Illinois’ same-sex “marriage” law, Francis Cardinal George wrote a letter that appeared in church bulletins in which he said that “there will be consequences for the Church and society that will become clearer as the law is used to sue for discrimination …It will contribute over the long run to the further dissolution of marriage and family life, which are the bedrock of any society.”

Chicago Tribune columnist Eric Zorn wrote that he had “looked into this some and haven’t yet been able to identify the research or track records upon which this prediction is based. But given all the handwringing out there among social conservatives, I figure it must be persuasive.”

In preparation for today’s column on same-sex  “marriage,” Mr. Zorn emailed me this question: “What if any practical, difference will this make to those of us who are happily married mothers and fathers? I can’t think of any, but given the animation of groups like yours I thought you surely can.”

Here is my response:

Some of us have concerns about the radical redefinition of marriage that go beyond the personal and parochial. We’re concerned about the rights of all children, the rights of parents five, ten, or twenty years in the future. And we’re concerned about religious liberty for our children and our children’s children. What “animates” us—to use your term—is far greater than our immediate self-interests.

Obama has issued multiple Mother’s and Father’s Day proclamations in which he asserts that mothers and fathers are essential to the lives of their children, and then he incoherently endorses a form of marriage that embodies the fanciful assumptions that mothers or fathers are interchangeable or irrelevant.

Predictions can be based on research—and by research, I assume you mean sociological research—but they  can also be based on reason. One of the problems with not just “progressives” but many on both the Left and Right is their failure to think philosophically. We don’t take the time to think through the logical outworkings of an idea (as opposed to a fallacious slippery slope).

For example, those who argue that marriage has a nature but that nature does not include sexual complementarity and further that marriage is centrally or solely constituted by intense romantic feelings have to offer reasons why plural unions should not be legal. In fact, they need to justify with reasons why marriage should be limited to only those in romantic relationships.  Why should government-sanctioned marriage recognize only romantic unions as marriages? What is the relevance to the common good of inherently sterile romantic/erotic unions? If marriage has no inherent connection to reproductive potential and it’s constituted solely by love, then there is no more reason for the government to be involved in it than there is in the government being involved in recognizing other types of non-reproductive loving relationships. There is a logical outworking of the idea that marriage has nothing to do with reproductive potential and is only constituted by love.

Predictions about the future of marriage, family life, and religious liberty can be based both on sociological research and logical thought. So, for example, there are decades of studies that show that children fare best when raised in an intact family with a mother and father. The Left likes to say that the sex of caretakers is wholly irrelevant and that all that matters is the number of parents, but that’s an assumption based on virtually nothing. Why is the number two essential to marriage while sexual complementarity is not?

It’s frustrating to see the poor research the Left trots out in support of, for example, homosexual parenting or the etiology of same-sex attraction, while they trash much larger better constructed studies that arrive at conclusions that don’t suit their political ends. No social science research is flawless, but the studies that homosexual activists and their many friends in the media extol are by and large much worse than the studies that contradict their biases.

Chai Feldblum who is a lesbian, former Georgetown University Law professor, and current member of the EEOC, has written—that is to say, predicted—that when same-sex marriage is legalized conservative people of faith will lose religious rights She argues that this is a zero-sum game in which a gain for homosexuals means a loss for conservative people of faith (“Moral Conflict and Liberty: Gay Rights and Religion”). In her prediction, she used as an illustration, Christian bed and breakfast owners who will suffer a loss of religious liberty for their refusal to rent their facilities out to homosexuals, an issue we’re seeing right here in Illinois.

It seems reasonable to predict that encoding in law the idea that marriage has no inherent connection to sexual complementarity or reproductive potential will increase the practice of homosexuals creating children to be intentionally motherless and fatherless. It seems reasonable/logical to predict that some years from now, these children will feel the kind of sorrow and resentment at being denied their birthrights that adults who were products of anonymous sperm or egg donations now feel. We are commodifying children, and that is fraught with tragic cultural implications. Read what Alana Newman says in her article, “What Are the Rights of Donor-Conceived People?”

Here’s a NY Times article on free speech case that provides evidence for the claim that the legalization of same-sex “marriage” will affect society negatively–well, that is if you value free speech.

I know that you believe religious discrimination is justifiable and permissible once someone enters the marketplace, but there are two important distinctions that must be addressed: First, providing services to homosexuals is different from providing services for a same-sex union ceremony. It is an inconvenient truth for “progressives” that the elderly baker in WA who is being sued by the state because she wouldn’t provide a cake for a homosexual “wedding” had sold baked goods to the homosexual man who had sought her services for his “wedding.” She didn’t refuse to serve a homosexual. She refused to use her goods and gifts in celebration of something that violates her religious convictions.

Heterosexuality has an objective biological/anatomical component, which homosexuality does not. Homosexuality (unlike race) is constituted solely by subjective feelings and volitional (sexual) acts. Are “progressives” willing to add all other conditions similarly constituted to the list of protected categories?

In addition, since homosexuality (unlike race) is constituted by feelings, desires, and volitional acts, it is perfectly legitimate to assess morally.

There is zero evidence that same-sex attraction is genetically determined, and even homosexual researchers say there never will be a gene for a complex behavior like sexual attraction. But let’s hypothesize that there may be some biochemical influences in some cases for the development of same-sex attraction. Is it your argument that any behavior that is driven by an impulse or desire that is shaped to some degree by biochemistry is necessarily moral? That strikes me as a very dangerous proposition, but that’s precisely the assumption that inheres the Left’s central argument.

Here are some other predictions based on logic:

Years ago we were fed another deceit about marriage. We were told that no-fault divorce would be good for marriages and good for children. It has been disastrous for both. As Richard Weaver wrote, “Ideas have consequences.”

On what basis does the Left predict that severing marriage from sexual complementarity and reproductive potential will have no deleterious effects on marriage, children, or religious freedom?

Those who don’t believe that radical ideas shape culture over time in profound ways don’t read enough history or philosophy.

One final comment: The Left continually spews the ugly and destructive lie that everyone who believes homosexual acts are immoral hates homosexuals. Not only is that false, it’s pernicious, especially when told to children or teens. It destroys any possibility for relationships and dialogue between people of good will who disagree on what leads to human flourishing. Most of us who live in a diverse world are fully capable of enjoying the company of, admiring the good qualities of, and loving those who hold beliefs or make life choices with which we disagree. Most of us do it every day.

The “Trans” Nightmares of Children We Don’t Want to Hear

Our Failing Demographics
b
a
x
r