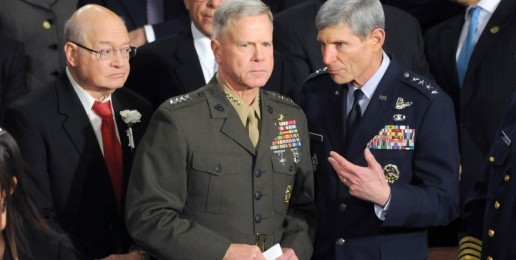 by Malcolm A. Kline –Accuracy in Academia

Now that the President is poised to sign the repeal of the ban on homosexuals serving in the U. S. military, academics are prepared to welcome the armed forces they have banned from their campuses with open arms, at least metaphorically. San Francisco State University political scientist Aaron Belkin will actually be at the White House signing ceremony, according to Renna Communications.

“In the meantime,” the Center for Military Readiness(CMR) notes, “Marine Corps Commandant General James Amos drew criticism from a gay activist group, sparked by his statement expressing concern for his Marines if the current law is repealed:

“Aubrey Sarvis of the Servicemembers Legal Defense Network (SLDN) who was recently seen sponsoring a rally with Lady Gaga in Maine, issued a statement demanding that Gen. Amos resign. Sarvis’ attitude demonstrates ‘zero tolerance’ of dissent-a strategy of intolerance recommended to make the new LGBT Law or policy ‘work.’ Marines who have a problem with the “New Gender Order” will have no recourse but to leave the Corps.”

As CMR discovered, many will choose to do just that:

1.) “Defense Secretary Robert Gates has repeatedly denied that the survey was a ‘referendum.’ He has nevertheless allowed the media to keep trumpeting the Working Group’s misleading claim that 70% of service members predicted that repeal of the current law would have a ‘positive, mixed, or no effect.’ The carefully crafted money quote, spun up from an innocuous inquiry asking personnel whether they knew or liked someone at work who is gay, quickly morphed into the false claim that 70% of military people surveyed favored repeal of the law.

“To the contrary, as Peter Sprigg of the Family Research Council has reported, the highlighted question included ‘mixed’ results indicating that 62% of respondents also believed that repeal would have at least some negative effects:

–Pentagon Report on Homosexuality Buries the Lead: The Majority of Views Expressed Are Opposed to Repeal

“Furthermore, the views of military people on repeal or retention of the current law cannot be stated with certainty because the question was not even asked in any of the Working Group’s survey instruments and focus groups. Nevertheless, the administration is trying to use calculated misrepresentation of the survey results in order to switch sufficient votes to win in the Senate.

-“The claim is belied by specific findings about the strong opposition of combat soldiers and Marines. On page 74 of the DoD Working Group Report available here,and Implementation Plan posted here, we read that ‘Nearly 60% of respondents in the Marine Corps and in Army combat arms said they believed there would be a negative impact on their unit’s effectiveness in this context; among Marine combat arms the number was 67%.’

-“Question 81 of the ‘2010 DADT Survey,’ asking active-duty and reserve troops whether repeal of the current law would affect future career plans, found that 12.6% of personnel in the Military Services Overall said they would leave sooner than planned-a percentage that potentially equates to 264,600 of the 2.1 million active-duty/reserve force. Another 11.1% said they would think about leaving sooner than planned, and potential losses for the Army and Marine Corps would be even higher. (p. 210, DoD Report)

-“Cross-tabbed data displayed in the 2010 DADT Survey indicate that potential losses would be highest among troops described as ‘combat arms.’ Among Army combat arms personnel, 21.4% would leave sooner than planned, and 14.6 would think about leaving the Army.

Malcolm A. Kline is the Executive Director of Accuracy in Academia.