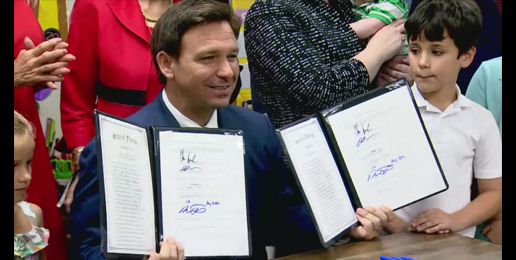 As Americans awaken to the tyrannical aspirations of leftists who seek to impose their socially constructed metaphysical, moral, and political beliefs about sexuality on everyone—including other people’s children—by any means available, Americans are fighting back. This is a war for freedom, the family, America, and our souls. And wars need leaders. In Joe Biden and Ron DeSantis, we have an anti-leader and a leader, respectively.

While parents are mustering the courage to confront arrogant, ignorant school boards; feminists are challenging “gender theory” and the erasure of woman; liberal writers are moving to Substack to expose the totalitarian diktats of former employers; and Hispanic and black voters are fleeing the Democrat Party, anti-leader and crime family boss Joe “Bananas” Biden is getting  out his well-worn shovel and digging his hole deeper.

In honor of sodomy/cross-dressing pride month, President Joe Biden has issued yet another Royal Proclamation Executive Order that he calls “historic.”

While it is symbolically historic in its comprehensiveness, it is more historical in that it’s in keeping with Biden’s long history of ineffectuality. In his Proclamation, Biden expresses his DEEP FEELINGS and shallow thoughts about sexuality—all of which contradict his DEEP CLAIMS about and shallow commitments to Catholicism.

In his Proclamation, Biden “speaks up” about stuff, “releases” stuff, claims that he will “increase awareness” of stuff, and “charges” departments with “issuing guidance” about stuff. Biden is also going to launch, lead, promote, study, support, direct, encourage, expand, explore, research, strengthen, coordinate, identify, seek, establish, address, lead on, and fight back against stuff. Since none of this involves Biden actually doing anything, he’ll have plenty of time for, biking, bilking Americans, and sending money to Hunter.

All of this frenetic activity is in the service of imposing his beliefs about identity, homoeroticism, marriage, cross-dressing, and parental rights on all Americans—beliefs that many Americans find bigoted, hateful, and dangerous.

In contrast, there is Florida Governor Ron DeSantis—a leader and hero.

In the past year, DeSantis signed into law multiple excellent bills to restore integrity to public education. Most of the country heard about the bill about which leftists misinformed the public, calling it the “Don’t Say Gay” bill. The law

This sane bill drives the loons among us to their fainting couches. Creepy adults who want to discuss sexuality with other people’s very young children are incensed that the job they took with the intention of indoctrinating kids has been neutered.

Many people also heard about Florida’s ban on boys playing on girls’ sport teams—another manifestly sane law to which only delusional or cowardly adults object. Contrary to the bigoted claims of leftists, laws like this are not attacks on boys who pretend to be girls. They are protections of and for girls.

But DeSantis also signed into law two other bills of paramount importance: HB 5 and HB 233.

The State Board of Education may not shield students, faculty, or staff at Florida College System institutions from free speech protected under the First Amendment to the United States Constitution [or] Art. I of the State Constitution, or s. 72 1004.097 .

The law makes clear that it is unlawful to “limit students’, faculty members’, or staff members’ access to, or observation of, ideas and opinions that they may find uncomfortable, unwelcome, disagreeable, or offensive.”

This law should be unnecessary in a country founded on a commitment to free speech. Uncomfortable, unwelcome, disagreeable, or offensive speech is precisely the kind of speech the First Amendment was intended to protect. There is no need for guarantees to speak publicly on topics on which everyone agrees.

Moreover, leftist teachers have no objections to conservative students or colleagues being exposed to speech they find uncomfortable, unwelcome, disagreeable, or offensive.

Equally if not more important, DeSantis signed HB 5 into law (titled the Civic Education Curriculum, which amends an existing law pertaining to requirements for high school graduation. The amendment requires that courses about American government,

include a comparative discussion of political ideologies, such as communism and totalitarianism, that conflict with the principles of freedom and democracy essential to the founding principles of the United States.

In the service of that goal,

the Department of Education shall: (a) Develop or approve an integrated civic education curriculum that school districts and charter schools must incorporate as part of regular school work in kindergarten through grade 12.

The civic education curriculum must assist students in developing:

(a) The history and content of the Declaration of Independence, including national sovereignty, natural law, self-evident truth, equality of all persons, limited government, popular sovereignty, and inalienable rights of life, liberty, and property, and how they form the philosophical foundation of our government.

(b) The history, meaning, significance, and effect of the provisions of the Constitution of the United States and amendments thereto, with emphasis on each of the 10 amendments that make up the Bill of Rights and how the constitution provides the structure of our government.

(c) The arguments in support of adopting our republican form of government, as they are embodied in the most important of the Federalist Papers.

Such goals for public education would have been unremarkable and non-controversial sixty years ago, before leftist Boomers began taking over colleges and universities and then mainlining poisonous ideas into the hearts and minds of school children. Now the ideas of national sovereignty, self-evident truth, inalienable right to life, and patriotism are loathed by the left who hope to bequeath their loathing to future generations of Americans.

At last, increasing numbers of conservatives are beginning to understand that the “social issues” matter. In fact, the social issues that RINOs and libertarian-leaning Republicans dismiss as trivial are the most important issues facing Americans today in that addressing them threatens our essential First Amendment protections of free speech and religious free exercise. Speaking freely today—particularly on the morality of homoerotic acts, sexually undifferentiated pseudo-marriage, cross-dressing, and the sexual integration of women’s private spaces and sports will get Americans fired.

While leftists are able to freely express—even shriek—their nonsensical and destructive beliefs about “LGBTQ+” issues with no fear of professional repercussions, conservatives can get fired for tweeting theirs. If the ability to earn a living is threatened if Americans express moral views the left hates, the First Amendment is meaningless.

In the fight to preserve liberty, we must have wise, courageous leaders. There are none in the Democrat Party.