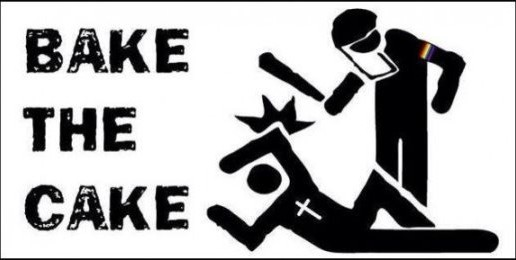 Written by By Laurie Higgins

I would love to hear Melissa and Aaron Klein’s answer if some “LGBTQIAAP” activist or intrepid, “unbiased” journalist asked, “How would the legalization of gay marriage affect you?”

Oh wait, no one can hear their answer because Oregon Labor Commissioner Brad Avakian has ordered them to “cease and desist” from publicly discussing how it’s affected them.

In addition, he has fined them $135,000 for the “emotional distress” they allegedly caused two lesbians whose wedding cake the Kleins declined to make because of their true religious belief that there exists no such thing as a homoerotic “marriage.”

Melissa and Aaron Klein are the former owners of a small, independent bakery in Oregon who exercised their First Amendment right to the free exercise of religion and declined to make a wedding cake for a lesbian anti-wedding. Avakian in his foolishness and arrogance described this as a refusal to serve the lesbians based on their sexual orientation.

Here is Avakian’s statement on the astonishing abrogation of First Amendment protection that he has commanded:

“The Commissioner of the Bureau of Labor and Industries hereby orders [Aaron and Melissa Klein] to cease and desist from publishing, circulating, issuing or displaying, or causing to be published … any communication to the effect that any of the accommodations … will be refused, withheld from or denied to, or that any discrimination be made against, any person on account of their sexual orientation,”

The Daily Signal explains the tortured reasoning of Avakian:

The cease and desist came about after Aaron and Melissa Klein participated in an interview with Family Research Council’s Tony Perkins. During the interview, Aaron said among other things, “This fight is not over. We will continue to stand strong.”

Lawyers for plaintiffs, Rachel and Laurel Bowman-Cryer, argued that in making this statement, the Kleins violated an Oregon law banning people from acting on behalf of a place of public accommodation (in this case, the place would be the Kleins’ former bakery) to communicate anything to the effect that the place of public accommodation would discriminate.

For true followers of Christ, the exercise of their religion extends beyond their pews and homes. It encompasses or should encompass the entirety of their lives. This is something that our Founding Fathers—including even the deists—understood, but contemporary liberals reject with disdain.

The Kleins, parents of five children, were forced to close their bakery, their sole source of income. Their significantly diminished income comes from Aaron’s current job as a garbage collector. To help this family in need, A GoFundMe campaign started which raised $109,000 in a matter of hours. Then, under pressure from tolerant disciples of diversity, the GoFundMe website shut it down. Nothing says tolerance quite like impoverishing families for their religious beliefs.

Here is a list of just some of the (unverified) 88 feelings and/or effects for which the two lesbians sought financial remuneration:

This wowzer list of ailments purportedly resulted from not being able to purchase a wedding cake from one bakery. How, pray tell, do these two function in a diverse world?

Perhaps, just perhaps, their ailments were caused by their own wrongdoing and not by the right actions of the Kleins.

Here are some things that I hope happen:

And on July 4, while we celebrate the freedoms we enjoy in America—chief among them the right to speak and the right to exercise our religion freely—perhaps we should pause for a moment of silence to mourn the denial of those rights to the Kleins.

Please support IFI as we fight for liberty and work to advance the truth
about the sanctity of life and importance of marriage in our culture!