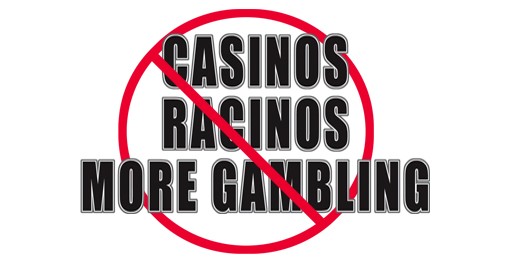 Please take three minutes to respond to this call to action!

With just a few days left before their scheduled May 31st spring session adjournment, Illinois state lawmakers do not have much time left to pass a budget, pension and retiree health care reform, workers’ compensation reform, and create new legislative districts for 2012.

As if they didn’t have enough to do, one of the proposals making their priority list is a massive gambling bill (SB 744) that would create five new casinos in the Land of Lincoln, including one in Chicago. This legislative proposal would authorize additional casinos in Danville, Rockford, Park City, and somewhere in the South Suburbs.

Take ACTION: Contact your lawmakers to tell them “NO MORE GAMBLING — PERIOD.” Don’t delay in speaking out! With only days left in the spring session, this gambling bill will move fast!

Background
Adding to the 10 casinos we currently have in Illinois, residents of this state face the prospect of having 21 casinos or casino-like establishments in the near future, making Illinois a top contender for the most anti-family and predatory gambling state in the nation.

The National Gambling Impact Study Commission suggests that problem gambling and addiction rates DOUBLE within a 50 mile radius of a casino. Think of all the people within a 50 mile radius of 11 new casinos or casino-like establishments, and how many new gambling addicts the state will help to produce with this foolish proposal. In Chicago there are 2.8 million people and in Cook County there are 5.2 million. There is an enormous potential for a great many new gambling addicts in Chicagoland alone! How is this good public policy?

While high-paid lobbyists for the predatory gambling industry promise our lawmakers to solve the state’s fiscal problems. Here are some important insights and facts that must be considered in this debate:

Expanding legalized gambling creates a web of loss, anger and despair that impacts not only the gamblers, but their families, friends and communities. Expanded gambling is not the answer to the state’s fiscal problem, but will instead create pain and suffering for far too many families. Much of this will have to be absorbed by taxpayers as foreclosures, crimes, addictions, divorce, bankruptcies, and unemployment increase.

Tell Springfield Lawmakers “No More Gambling” and “No More Taxes!”
b
a
x
r