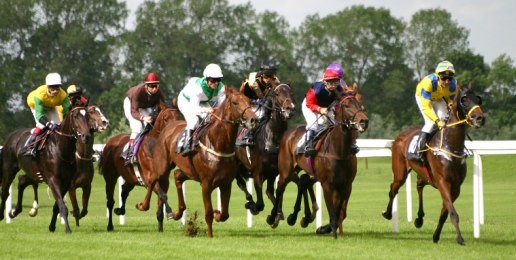 From Illinois Church Action on Alcohol and Addiction Problems

Racetrack owners and horsemen may have reached a deal on Advance Deposit Wagering (Internet betting on horse racing).  This form of wagering will expire on January 31, 2014, without legislative action.   The “deal” extends Internet gambling for three more years, adds 6 more Off Track Betting parlors for racetracks located in Cook County, and adds a tax on winnings to provide more funding for the Illinois Racing Board.

Gambling interests are still pushing for slots at the tracks with the same arguments that they cannot compete with other states that have racetrack casinos.

Look what happened in New Jersey when a new owner, who was “a lifelong harness racing fan”, turned things around at the track.  This year, despite the fact the Meadowlands does not have slot machines and must compete for the best horses with tracks that do have slots that augment purses, the new owner and his team managed to grow wagering significantly essentially by working hard, thinking differently and making customer service a priority.

Mayor Rahm Emanuel’s administration released a study this week that a Chicago casino anchoring redevelopment at the former Michael Reese Hospital site would be more economically viable for the city than a presidential library for Barack Obama or a cluster of convention hotels.

Gambling interests and legislators will try to pass a massive expansion bill (SB 1739) as a way to increase revenue for the State and the City of Chicago.  Gambling is an unstable source of revenue that has not and cannot solve the financial problems.

The Illinois Video Gaming Board will create a blacklist and seek stricter licensing rules.  The Chicago Tribune reported Chairman Jaffe said potential loopholes could “essentially be opening the door to organized crime,” undermining what is supposed to be a tightly regulated industry.

Jaffe publicly complained at the meeting that the gaming board has had trouble getting officials in some jurisdictions to aggressively prosecute gambling offenses…he said he wants lawmakers to give the gaming board the latitude to bring cases to different prosecutors or the attorney general.

Contact your state legislators and Governor Quinn and ask them to oppose ALL gambling bills. CLICK HERE