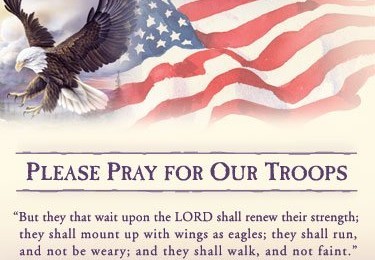 Why No Religious Liberty Protections for Service Members, Who Defend Our Liberties?
05.23.11
PRINT

Official providers of chaplains to U.S. military voice strong concerns over long-neglected conscience protections if DADT is torn down.

WASHINGTON – Twenty-one religious agencies providing chaplains to the U.S. military sent a joint letter to the military’s chiefs of chaplains Monday voicing strong concern over the continuing absence of religious liberty protections if openly practiced homosexual behavior is definitively imposed on the military. The letter asks the chiefs for their help in urging Congress and the Department of Defense to adopt such protections.

ADF attorneys helped draft and propose religious liberty protections for the Pentagon’s working group on the matter, but the law designed to dismantle the so-called “don’t ask, don’t tell” policy still lacks any such protections. ADF has provided free legal support to many concerned chaplains and service members.

“Service members should not be denied the very constitutional liberties they volunteered to defend,” said ADF Legal Counsel Daniel Blomberg. “If this government truly cares about protecting religious liberties as it says it does, why has it been afraid to put it in writing? The alarm has been sounded time and time again in this process by those with the utmost credibility. The question is: will our military leaders and elected officials listen?”

“The protections that ADF and others have proposed simply preserve the constitutional status quo and allow service members to speak openly about their religious and moral beliefs,” Blomberg added. “The chiefs do not have an easy job, and the signers of this letter clearly want to support their service to God and country. Part of that support is encouraging the chiefs to help defend important religious liberties.”

The letter is signed by endorsing agents representing many of the major Christian denominations that provide chaplains, including the military’s largest chaplain endorser, the Southern Baptist Convention’s North American Mission Board. The Roman Catholic Archbishop for the Military Services USA issued his own statement Friday.

The letter expresses additional concern that the endorsing agents, who are highly respected veteran military officers and chaplains themselves, have rarely been sought for input. The letter specifically cites a recent Navy chaplaincy directive that would allow same-sex “marriage” ceremonies at Navy chapels in some states even though doing so would be illegal under the federal Defense of Marriage Act.

“Though this revision is now temporarily suspended pending further review, we are genuinely concerned that this might be a sign of things to come,” the letter states. “We are likewise concerned that endorsers and faith communities had no voice in the formulation of such a significant policy change. DOMA remains the law of the land. There is no clear reason why it does not apply to Federal military facilities, particularly base chapels…. Since the current administration has publicly stated that it will no longer support and defend DOMA, this action has every appearance of selective disregard for the law and raises significant concerns.”

“It is not sufficient to posit, as the CRWG report did, that chaplains and service members remain free to exercise their faith in chapel services,” the letter continues. “Service members should know that chaplains’ ministry and their own rights of conscience remain protected everywhere military necessity has placed them. We hope that you will join us in urging the DoD and Congress to adopt such specific and intentional conscience protections.”

ADF is a legal alliance of Christian attorneys and like-minded organizations defending the right of people to freely live out their faith. Launched in 1994, ADF employs a unique combination of strategy, training, funding, and litigation to protect and preserve religious liberty, the sanctity of life, marriage, and the family.