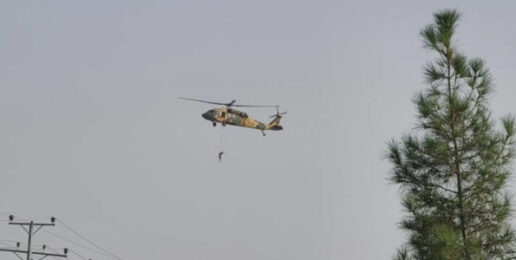 Yesterday, Joe Biden proclaimed the evacuation from Afghanistan an “extraordinary success” that was executed exactly the way “the mission was designed.”

Meanwhile, the Taliban celebrated this extraordinary success, also known as the Taliban’s humiliation of the most powerful military in history, in the only way tyrannical Muslims know how: through a shocking act of grotesque barbarism that makes civilized people weep—or vomit. They flew a U.S. helicopter from which was dangling a corpse.

Now, false god-serving radicals and other godless regimes that devalue human life are emboldened. And with Biden’s gift of “tens of billions of dollars’ worth” of materiel paid for by American taxpayers, the emboldened terrorists are better equipped to torture and slaughter friends of America and to enslave women and girls.

If we don’t turn our sinking ship of state around—starting now—in preparation for the 2022 midterm elections, what will our military look like in the future. Sure, we’ll have critical race propagandists; atheist chaplains; hormone-doping, cross-sex impersonators; homosexuals; and pregnant fighter pilots, but will we have a few good men?

Will young men enlist if they can’t trust the commander in chief?

Will young men enlist to defend and protect a country that they were indoctrinated to believe is a systemically and irredeemably racist country whose Founders were evil and whose Constitution should be shredded?

Will young men indoctrinated with the leftist belief that America the ugly must be reimagined and deconstructed be willing to say, “This We’ll Defend,” “Always Faithful,” “Not self, but country,” or “Aim High … Fly-Fight-Win”?

Elections have consequences. So too do the ideas driving voting decisions.

Sanctimonious Never-Trumpers like David French, Lincoln Project members, and Christianity Today writers whose flawed moral and political calculus led them to conclude that facilitating the election of a corrupt, senile recluse who supports the destruction of marriage, the legal right to slaughter the unborn at taxpayer expense through all nine months of pregnancy for any or no reason, and the mandatory indoctrination of children and government employees with critical race theory was preferable to Trump with all his acknowledged flaws.

In so doing, they are complicit in the harm that is befalling those Afghans who helped us.

They are complicit in the indoctrination of yet more American children who will be taught the destructive, disunifying view that America and white people are ugly oppressors.

They are complicit in the eradication of childhood innocence, sex-segregated bathrooms, and girls’ sports.

They are complicit in the growing toleration and even celebration of lawlessness. Biden incentivized illegal immigration that has resulted in human suffering far surpassing anything the press savaged the Trump administration for. Under Biden, police departments have been defunded, financially strapped cities permit looting, vagrancy and littering laws are flouted creating unlivable cities, and mandatory COVID restrictions are scorned by the rich and powerful.

Heeding the words of Biden’s pick to be our ambassador to Japan, Rahm-bo Emanuel, who famously said, “You never want a serious crisis to go to waste”—this one, the Chinese Communist Pandemic—leftist government leaders are incrementally paving the way for a de facto social credit system akin to China’s. No vaccine? No job.

Add to that the requirement by Big Business and Big Brother Sister Sibling that employees must refer to colleagues who pretend to be the sex they aren’t by incorrect or silly pronouns and, voilà, America’s Social Credit System.

As lawmakers plunge America further into debt; as the last few coins are emptied from the pockets of Americans to fill the emptied coffers of the government; as First Amendment speech rights and religious liberty are undermined; as parental rights are stripped; and as deviant sexual obsessions grip the hearts, minds, bodies of Americans and the institutions that shape our lives, we have decisions to make. Will we accept the gift of self-government, messy as it is, and use it wisely? Or will we leave it to the foolish and spiritually blind who will greedily grip the gift and then crush it.