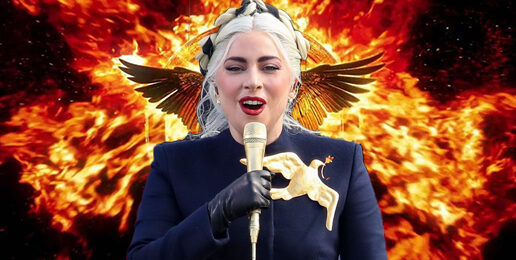 But wait, was it? Wouldn’t the best speech necessarily be a true and honest speech?

Biden said, “[A]t this hour, my friends, democracy has prevailed. … [T]he American story depends not on any one of us, not on some of us, but on all of us. … [T]o restore the soul and to secure the future of America—requires more than words. It requires that most elusive of things in a democracy: Unity. Unity.”

I love unity, unity, as much as the next gal or nonbinary human, but I’m wondering how the efforts of Big Tech, corporate behemoths, AOC, John Brennan, and other Democrats to cancel and crush anyone who expresses ideas they hate fulfill Biden’s quest for double the amount of unity we have right now.

Just a few nights ago on MSNBC, John Brennan cheerfully told lefty Nicole Wallace that the Biden administration is “moving in laser-like fashion to try to uncover as much as they can about” the “insurgency” composed of “religious extremists, authoritarians, fascists, bigots, racists, nativists, even libertarians.” Hmmm …

So, how does the Biden administration define these groups? Will the criteria used for identifying “religious extremists, authoritarians, fascists, bigots, racists, nativists” and “libertarians” be made public? After the laser-focused secret police uncover the plot of Brennan’s enemies to compete freely in the market place of ideas, what will be done with the dissident freethinkers? Will they be forced into PBS’s “enlightenment camps” or will AOC’s “de-radicalizing” pogroms to cleanse America of conservative Christians take care of their disunifying presence?

In the service of doubling our unity, will Biden plead with Big Tech, Big Business, AOC, CNN, MSNBC, the New York Times, and Washington Post to call off their dogs, Overlords, and spy agencies?

Will Biden’s executive order mandating the sexual integration of children’s locker rooms, restrooms, and sports in government schools fulfill his quest for doubling our unity?

In the spirit of unity, will Biden acknowledge that the desire of girls and women to be free of the presence of opposite-sex persons in their private spaces is natural, normal, and good?

In his laser-like focus on unity, will Biden send “guidelines” to public schools recommending they no longer promote the controversial and divisive beliefs of the 1619 Project and Critical Race Theory?

How does the leftist ideological monopoly in our colleges and universities double our unity or foster democracy? We know that in addition to unity, Biden is bigly into diversity. We also know that without diversity of thought, critical thinking is impossible. So, in the service of both unity and diversity, will Biden urge college and university administrators and faculty to seek equity among faculty? Will he implore them to work diligently toward ideological parity, perhaps threatening to withhold government funds until such parity is achieved?

Will he condemn Hollywood and book publishers for their anti-conservative bigotry and de facto censorship of movies, plays, and novels with themes that criticize “progressive” ideas or embody conservative themes?

Will he denounce ugly epithets like “homophobe,” “transphobe,” “hater” and “bigot” that are hurled continuously at any Catholic or Protestant who upholds the historic teaching of the church on sexual matters? Will he agree that Christians should be free to use pronouns that correspond to scientific reality and God’s created order? Will he agree that Christian business owners should be free to make employment and service decisions in accordance with their faith?

To double our unity, will Biden urge Americans to remove lawn signs that say, “Hate has no home here,” since all Americans know those signs are a passive macro-aggressive way of leftists calling their theologically orthodox Bible-believing neighbors—both Catholics and Protestants— “haters”?

In his effort to unify the country twice over, will Biden publicly acknowledge that the claim that homoerotic acts are moral is neither a scientific claim nor objectively true?

Democrats have demonstrated that they are gung-ho about calling in the National Guard and every weapon in our formidable military apparatus to prevent further violence in the Capitol. So, in an effort to multiple our unity, will Biden beseech the New York Times to offer former editorial page editor James Bennet his job back? Bennet was the editor who was forced to resign for publishing an op-ed by Senator Tom Cotton in which Cotton argued that it was legitimate to call in the National Guard to quell the unremitting violence that roiled American cities last summer.

In his inaugural address, Biden said, “This is a great nation and we are a good people.” I’m confused. Critical Race theorists have been telling us for years—and emphasizing it through arson and looting—that America is a systemically evil nation conceived in racism and dedicated to the proposition that all people of color are inferior. So, which is it?

Biden said, “I ask every American to join me in this cause. Uniting to fight the common foes we face: Anger, resentment, hatred. Extremism, lawlessness, violence.” Later, on Inauguration Day, Antifa attacked a federal building in Portland. Has Biden condemned that lawless, violent attack by angry extremists? Did he label it an attack on democracy? Did he call it an insurrection?

While his inaugural address rightly condemned the “riotous mob” that used “violence” to attack the Capitol building, Biden said not one word about the riotous mobs that attacked federal buildings; monuments; private property; and police precincts, vehicles, and officers all summer. Why did his unifying address remain mute on that violence?

If and how Biden answers those questions will give Americans a better idea about whether he wants unity in diversity or unity by crushing diversity. We’ll know if this is the beginning of the Unity Games or—as Lady Gaga’s inaugural costume suggested—the Hunger Games.