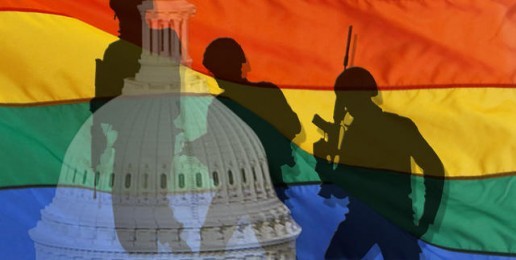 By a vote of 250-175, the U.S. House passed a bill yesterday that would repeal the military’s longstanding “don’t ask, don’t tell” policy involving sexual activity. It now moves on to the U.S. Senate.

U.S. Senate Majority Leader Harry Reid (D-NV) is once again trying to push a bill that would repeal “Don’t Ask, Don’t Tell.” Illinois’ U.S. Senator Mark Kirk must hear from Illinois citizens who are opposed to allowing open homosexuality in the military.

Take ACTION:  Contact Illinois U.S. Senator Mark Kirk to ask him to OPPOSE the repeal of “Don’t Ask, Don’t Tell” and the ban on open homosexuality in the military — a ban that dates back to General George Washington who believed that the military should uphold the Judeo-Christian values upon which our nation was founded.

General James Amos, the head of the Marine Corps, recently told reporters that a change in the policy could result in casualties. “When your life hangs on the line, you don’t want anything distracting… mistakes and inattention or distractions cost Marines’ lives.”

Despite not having yet passed a budget or dealing with the tax code, liberals in Washington are obsessed with pushing a radical social agenda that didn’t show up on the American people’s list of priorities prior to Election Day. This blatant “in your face” to Americans that voted against the liberal agenda must be rejected.

Unfortunately, nothing was going to stop the repeal in the U.S. House, but there remains hope to stop it in the U.S. Senate. Senator Mark Kirk, a military veteran, needs to hear from Illinois this week on this important vote!

Read more: There is an interesting editorial on this issue appearing on the web site “big peace.” It theorizes that the repeal of DADT, which is strongly opposed by front line combat forces, could decimate recruitment and retention numbers and lead to the reinstatement of the draft. You can read that editorial about yet another negative impact of repealing DADT HERE

ACTION: Please contact Senator Kirk’s office at 202-224-2854 or by clicking the link below and urge him to vote against “don’t ask, don’t tell” repeal.

Pres. Obama’s Address to Gay Activists
b
a
x
r