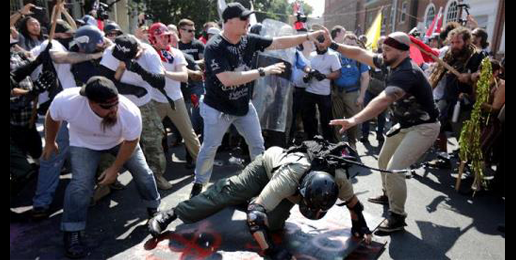 I was hoping not to step into the sticky wicket that the Charlottesville protest, counter-protest, and at

tack created. All discussions of fault or causation carry the risk of being labeled a bigot or hater. But, for a number of reasons, fearful silence is not a justifiable response.

One of those reasons is that the Plainfield Patch published an article titled “Illinois Hate Groups: Map Shows Active Racist Organizations” in which the Patch cites the Southern Poverty Law Center (SPLC) to alert Illinoisans to the presence of “32 hate” groups in Illinois, including the Illinois Family Institute.

It is both morally indefensible and intellectually dishonest of the ethically impoverished Southern Poverty Law Center to include the Illinois Family Institute (IFI) on its list of “hate” groups, alongside repugnant white supremacist groups/white separatists/white nationalists.

IFI is included on this list because we espouse theologically orthodox views of homosexuality, marriage, and the intrinsic and profound meaning of objective, immutable biological sex—views that are held by the Catholic Church, a dozen Protestant denominations, the Mormon Church, Seventh Day Adventism, many non-denominational churches, 2,000 years of church history, the Bible, and Orthodox Judaism.

The goal of the SPLC’s malignant slander is to stigmatize and marginalize any group that defends marriage and sexual morality. Is the Plainfield Patch absolved of all moral culpability for smearing IFI because technically all it did was cite the anti-Christian hate group known euphemistically as the SPLC?

To be clear, the Illinois Family Institute and its sister organization Illinois Family Action—both of which have blacks serving on our boards–unequivocally denounce racism and hatred directed at any persons.

Every decent person and certainly every Christian should denounce the vile racist beliefs of white separatists/white supremacists. We should condemn the actions of the domestic terrorist who launched his car into a crowd to mow down those whose beliefs he rejected. His actions (and the beliefs that impelled them) are as repugnant as those that led to lynchings, Jim Crow laws, and the Holocaust.

Christians must speak truth even when doing so is difficult. In a letter to his son who has embraced the ugly and false beliefs of what has come to be called the “alt-right,” a father reveals what commitment to truth may entail:

On Friday night, my son traveled to Charlottesville, Va., and was interviewed by a national news outlet while marching with reported white nationalists, who allegedly went on to kill a person.

I, along with all of his siblings and his entire family, wish to loudly repudiate my son’s vile, hateful and racist rhetoric and actions. We do not know specifically where he learned these beliefs. He did not learn them at home.

I have shared my home and hearth with friends and acquaintances of every race, gender and creed. I have taught all of my children that all men and women are created equal. That we must love each other all the same.

Peter Tefft, my son, is not welcome at our family gatherings any longer. I pray my prodigal son will renounce his hateful beliefs and return home. Then and only then will I lay out the feast.

He once joked, “The thing about us fascists is, it’s not that we don’t believe in freedom of speech. You can say whatever you want. We’ll just throw you in an oven.”

Peter, you will have to shovel our bodies into the oven, too. Please son, renounce the hate, accept and love all.

The proper response to racial hatred is not the curtailment of speech rights, the destruction of property, or violent vigilantism. Dr. Martin Luther King Jr. and Mr. Tefft understood what antifa anarchists clearly do not.

Peter Beinart, associate professor of journalism and political science at the City University of New York, writes about the history and current incarnation of the troubling antifa movement in an article in the Atlantic titled “The Rise of the Violent Left”:

Since antifa is heavily composed of anarchists, its activists place little faith in the state, which they consider complicit in fascism and racism. They prefer direct action: They pressure venues to deny white supremacists space to meet. They pressure employers to fire them and landlords to evict them. And when people they deem racists and fascists manage to assemble, antifa’s partisans try to break up their gatherings, including by force.

Such tactics have elicited substantial support from the mainstream left.

The violence is not directed only at avowed racists like [Richard] Spencer: In June of last year, demonstrators—at least some of whom were associated with antifa—punched and threw eggs at people exiting a Trump rally in San Jose, California. An article in It’s Going Down [an online website for “anarchists” and “autonomous anti-capitalists”] celebrated the “righteous beatings.”

As members of a largely anarchist movement, antifascists don’t want the government to stop white supremacists from gathering. They want to do so themselves, rendering the government impotent.

Antifa believes it is pursuing the opposite of authoritarianism. Many of its activists oppose the very notion of a centralized state. But in the name of protecting the vulnerable, antifascists have granted themselves the authority to decide which Americans may publicly assemble and which may not. That authority rests on no democratic foundation. Unlike the politicians they revile, the men and women of antifa cannot be voted out of office. Generally, they don’t even disclose their names.

The people preventing Republicans from safely assembling on the streets of Portland may consider themselves fierce opponents of the authoritarianism growing on the American right. In truth, however, they are its unlikeliest allies.

The causes of both racial hatred and anarchism are numerous and complex. As Americans grapple with understanding them and finding solutions, I hope and pray they will think deeply about the causative roles these three phenomena play in rendering young people—particularly young men—vulnerable to racist or anarchistic ideologies:

Pastor and theologian John Piper reminds Christians that what unites humans—what humans of all races and ethnicities share in common—is far greater, more profound, and more substantive than the things that divide us:

In determining the significance of who you are, being a person in the image of God compares to ethnic distinctives the way the noonday sun compares to a candlestick. In other words, finding your main identity in whiteness or blackness or any other ethnic color or trait is like boasting that you carry a candle to light the cloudless noonday sky. Candles have their place. But not to light the day. So color and ethnicity have their place, but not as the main glory and wonder of our identity as human beings. The primary glory of who we are is what unites us in our God-like humanity, not what differentiates us in our ethnicity.

Recovering and passing on to our children an understanding of the political principles on which the greatest country in the history of the world was founded is essential to fostering unity amid diversity. So too is faith in God.

Turning and turning in the widening gyre
The falcon cannot hear the falconer;
Things fall apart; the centre cannot hold;
Mere anarchy is loosed upon the world,
The blood-dimmed tide is loosed, and everywhere
The ceremony of innocence is drowned;
The best lack all conviction, while the worst
Are full of passionate intensity.
(William Butler Yeats)