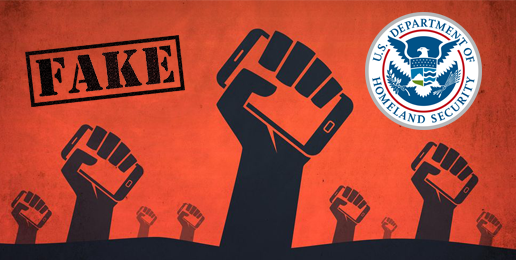 The Biden administration calls it the “Disinformation Governance Board” (DGB—word on the streets is that it was going to be named the “Knowledge Governance Board,” but “KGB” was already taken).

The rest of America calls it the Ministry of Truth, a title derived from George Orwell’s dystopian novel 1984.

In a rollout almost as wildly inept as Biden’s exit from Afghanistan, the Department of Homeland Security (DHS) announced its new effort to combat “disinformation.” After the past decade of Democrats spreading misinformation and disinformation, aided and abetted by leftist collaborators at the New York Times, Washington Post, CNN, and MSNBC, conservatives are justifiably wary about the DGB.

While leftists have sent to their memory hole the mis- and dis- information they spread like manure all across the fruited plains, conservative Americans have not forgotten it.

Conservatives remember the mis- and dis- excrement leftists spread about the cause of the Benghazi attacks, Trumps alleged collusion with Russia (including Adam Schiff’s bald-faced lies), the lurid tall tale about urinating Russian prostitutes, Hunter Biden’s laptop, the origins of the Wuhan virus, and the efficacy of masks. No conservative in American believes this is the kind of misinformation or disinformation targeted by any agency under a Democrat administration.

The timing of this announcement compounds conservative suspicions. The announcement came just before mid-term elections, just after the Biden administration announced it will be stopping Title 42 border expulsions, and just after Elon Musk purchased Twitter, vowing to make it a free speech platform.

Musk raised the hope that there will be no more algorithmic shenanigans that many believe were used by leftist-controlled social media platforms to throw the election to a senile recluse who refused to campaign and yet won by an alleged landslide.

And at the very moment that conservative hopes for the same kind of freedom leftists enjoy were raised, the DGB was born.

If the birth of the DGB weren’t bad enough, just take a look at the unprincipled, flakey head of the DGB: Nina Jankowicz who belts out obscene show tunes like a Broadway wannabe.

U.S. Senator Ron Johnson sent a letter to the Secretary of the Department of Homeland Security Alejandro Mayorkas expressing concerns about both the Jankowicz and the DGB that many Americans share:

Ms. Jankowicz herself has been a beacon of misinformation online.  She has published multiple tweets furthering the false media narrative about the Hunter Biden laptop. In one tweet she wrote, “IC has a high degree of confidence that the Kremlin used proxies to push influence narratives, including misleading or unsubstantiated claims about President Biden, to US media, officials, and influencers, some close to President Trump. A clear nod to the alleged Hunter laptop.” In another, she referred to the origins of how the media came into possession of the contents of Hunter Biden’s laptop as a “fairy tale about a laptop repair shop.” She has also posted tweets pushing the Trump-Russia collusion hoax and another implying the United States is as corrupt as Ukraine.

Now, DHS is creating a board to counter misinformation focusing on irregular migration and Russia and appointing a purveyor of misinformation to lead that effort. DHS is taking this action just weeks after announcing its plans to stop Title 42 expulsions at the southwest border, which has sparked a surge of illegal migrant crossing at the border, with CBP reporting an average of over 7,000 encounters a day in March 2022 compared with over 5,900 a day in February 2022. DHS even concedes it needs to be prepared to encounter 18,000 migrants a day at the southwest border once Title 42 is lifted.

You claim this Administration’s border policies are humane, but the crises caused by your policies have only added to the many tragedies caused by illegal immigration. I am concerned DHS’s Disinformation Board will only serve to silence or censor those voices critical of your disastrous policies and serve a political cover for your failure to secure the border.

Ironically, Jankowicz was against government oversight of speech  before she was for it:

Imagine that, you know, with President Trump right now calling all of these news organizations that have inconvenient for him stories that … they’re getting out there that he’s calling fake news, and now lashing out at platforms. I would never want to see our executive branch have that sort of power.

Here’s a revolutionary idea for the powerbrokers who want to run other people’s lives: How about finding a principle and then screwing it to a sticking place—like maybe your spine.

Just as leftists have defined conservative moral and ontological claims about homosexuality and cross-sex impersonation “hate speech,” so they can ban it, leftists in the Department of Homeland Security will define news stories they hate “misinformation” and “disinformation,” so they can do likewise.

There is one bit of good news peeking out from behind the cloud of oppression that has issued from the penumbras formed by gaseous emanations expelled from the Biden administration. We have learned that the Biden administration has mastered the art of losing an election: Raise gas prices, raise food prices, make America oil-dependent again, make the world a more dangerous place, judge people by the color of their skin and their genitalia, open wide our Southern border, tell parents the government owns their children, and then tell Americans that a powerful, unaccountable government bureaucracy is going to decide which ideas and opinions constitute “misinformation.”

Yep, that should tap the last nail in Joe’s metaphorical coffin. Rational, liberty-loving voters of every color don’t want the government deciding what their children should be taught, which laws can be broken, or whose speech can be banned.