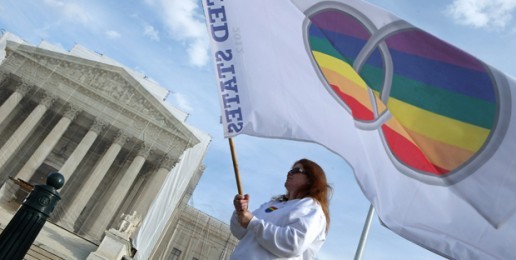 The future of the institution of marriage in the United States will be decided next year as the Supreme Court of the United States (SCOTUS) rules on two landmark cases.  The High Court has agreed to hear legal challenges to the federal Defense of Marriage Act (DOMA) and to a California constitutional amendment preserving the definition of natural marriage.

Proposition 8 was struck down by a homosexual U.S. District Judge whose ruling was broadly criticized as a “gay rights” manifesto,  rather than a reasoned examination of constitutional law.  That decision was upheld by the Ninth U.S Circuit Court of Appeals in a bizarre ruling that applied its result only to the state of California, rather than the entire Ninth Circuit.  The ruling by the Ninth Circuit has been on hold pending what is now a successful appeal to the U.S. Supreme Court.

Leading voices in the pro-marriage movement are calling the decision by the Supreme Court to hear the California case welcome news.  “We believe it is a strong signal that the court will reverse the lower courts and uphold Proposition 8,” says John Eastman, chairman of the Board of the National Organization for Marriage.

“Had the Supreme Court agreed with the lower courts’ decisions invalidating Proposition 8, it could simply have declined to hear the case,”  Eastman continues.  “It’s a strong signal that the justices are concerned with the rogue rulings that have come out of San Francisco.”

“Marriage between a man and a woman is a universal good that diverse cultures and faiths have honored throughout the history of Western civilization,” says Jim Campbell, legal counsel for the Alliance Defending Freedom.  “We look forward to advocating before the U.S. Supreme Court on behalf of the people’s right to preserve this fundamental building block of civilization.”

Forty-one states currently have laws on the books defining marriage in historical terms as the union of one man and one woman — including Illinois.  Thirty of those states have incorporated definitions of traditional marriage in their state constitutions.

The Proposition 8 case, Hollingsworth v. Perry, has the potential to be the Roe v. Wade of the national debate over the institution of marriage.  Should the Supreme Court uphold the Ninth Circuit decision, it would almost assuredly lead to the invalidation of all state laws protecting marriage, much like Roe v. Wade nullified all state laws protecting the unborn child.

Brian Brown, President of the National Organization of Marriage, believes such an outcome “would launch a national culture war.”  “The majority of Americans who have voted to protect marriage as the union of a man and a woman are never going to go away.”  A Supreme Court decree mandating so-called “same-sex marriage” on the nation would result in an explosive legal, cultural, and religious civil war more intense than the decades-old national struggle over legalized abortion.

Tony Perkins, President of the Family Research Council, agrees, saying  “Should the Supreme Court decide to overturn the marriage laws of 41 states, the ruling would become even more divisive than the court’s infamous Roe v. Wade decision.  Voters in these states will not accept an activist court redefining our most fundamental social institution.”

The other case the Supreme Court agreed to hear, United States v. Windsor, involves a challenge to the federal Defense of Marriage Act.  This federal DOMA protects states who have preserved the institution of marriage from being required to acknowledge same-sex unions approved in other states.

However, the legal challenge to the federal DOMA regards another provision that provides that government spousal benefits can only be extended to someone in a valid marriage between a man and a woman.   The plaintiff, Edith Windsor of New York’s Greenwich Village, claims she should not have to pay inheritance taxes on the estate of her lifelong lesbian partner.   The Second Circuit Court of Appeals ruled that the federal benefits section of DOMA is unconstitutional, echoing a decision made by a Boston appeals court in another DOMA challenge.

The Supreme Court will have to decide whether that section of DOMA is constitutional in its entirety, or whether it is unconstitutional as applied in states where marriage has been redefined to include homosexual unions.  In a stunning example of dereliction of duty, President Barack Obama instructed the U.S. Justice Department not to defend the federal DOMA in court.  The U.S. House of Representatives stepped forward to provide its own legal defense of the federal DOMA in the absence of Justice Department attorneys.

Some homosexual activists believe momentum is on their side following the decision by voters last month in Washington, Maine, and Maryland to redefine marriage to include homosexual unions.  Those three states join the states of Massachusetts, New Hampshire, Vermont, Connecticut, New York, and Iowa, where so-called same-sex “marriage” has been mandated by state courts or state legislatures.

Other homosexual activists are wary of an unfavorable High Court decision that could prove to be a major setback for their agenda.  Even if the Supreme Court were to force same-sex “marriage” on the entire country, some legal voices in the homosexual community believe that such a decision would be premature, prompting a potent backlash that would refuel the defense of traditional marriage.

The Supreme Court of the United States is expected to hear oral arguments in March, and issue a decision by late June.  Please be praying for all the Justices, particularly Justice Anthony Kennedy, who is expected to be the crucial vote in determining the outcome of these cases.