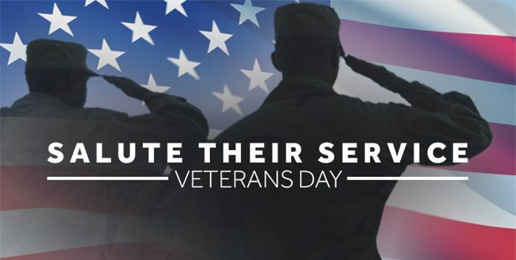 Remember Those Who Secure Freedom
11.11.17
PRINT

In John 15:12-13 Jesus says, “This is my commandment, that you love one another as I have loved you. Greater love has no one than this, that someone lay down his life for his friends.” Whether it is a husband protecting his wife, a mother protecting her children, or a friend protecting another friend, being willing to die for someone because of your love for them is a noble cause. On Veterans Day we have the opportunity to recognize the men and women who put their lives on the line for their family, neighbors, and fellow Americans.

In recent years, something as noble as recognizing those who’ve fought to defend America’s freedom has been exploited. We have seen well-known people disrespect our servicemen and women by refusing to stand for our flag during the playing of the national anthem. These dishonorable actions lead us to question who our society recognizes as “celebrities” and “role models.”

America is not a morally pure country and I know of no one who has claimed such. No nation on Earth is pure. We live in a fallen world where people will undoubtedly sin. In Romans 3:23 Paul says, “for all have sinned and fall short of the glory of God.” There are some detestable things that America has participated in which make me ashamed and embarrassed that they happened in our country. The murder of millions of children in their mother’s womb, slavery and segregation, and the legalization of homosexuality, to name a few. Despite America’s sins, should we dishonor her and the people who defend her?

Don’t forget though, that America has fostered some noble causes, all of which wouldn’t be possible without her Christian heritage. First, America has ensured self-governance for a historic amount of time. We are the oldest constitutional republic in the world. Second, America abolished slavery and segregation. Third, this country has sent millions of Christian missionaries abroad. According to a study cited by Christianity Today, America sent “127,000 in 2010 compared to the 34,000 sent by No. 2-ranked Brazil.” Last but not least, America fought in two World Wars not to seize territory or exploit resources but to defend and advance liberty both here and abroad.

What would America look like without men and women who were willing to lay down their lives for our freedom? If not for our brave men and women in uniform, who would’ve stormed the beaches of Normandy to help defeat Nazi Germany? Who would’ve defended us against Japan after they killed thousands of innocent American troops in Hawaii? Who would’ve taken the fight to Islamic terrorists in Afghanistan after they destroyed the World Trade Center killing thousands of innocent Americans?

America is an exceptional nation. What makes America different from every other nation in the world? She was founded on the truth that “all men are created equal, that they are endowed by their Creator with certain unalienable Rights, that among these are Life, Liberty and the pursuit of Happiness.”

This article was originally published at AFA.net

A Veterans Day Story that Focuses on … Homosexuality?